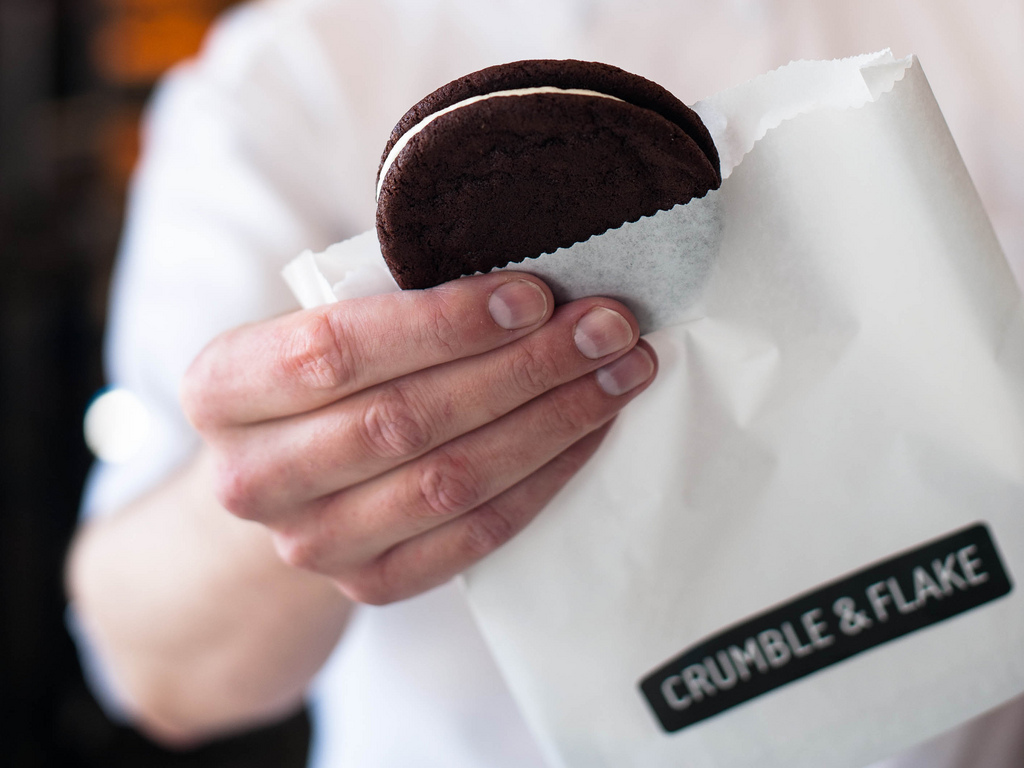 That was surely worth the wait, no? By which we mean the wait for Monday and the latest crispy, crunchy batch of Capitol Hill food+drink notes. Got a tip? Drop it here. 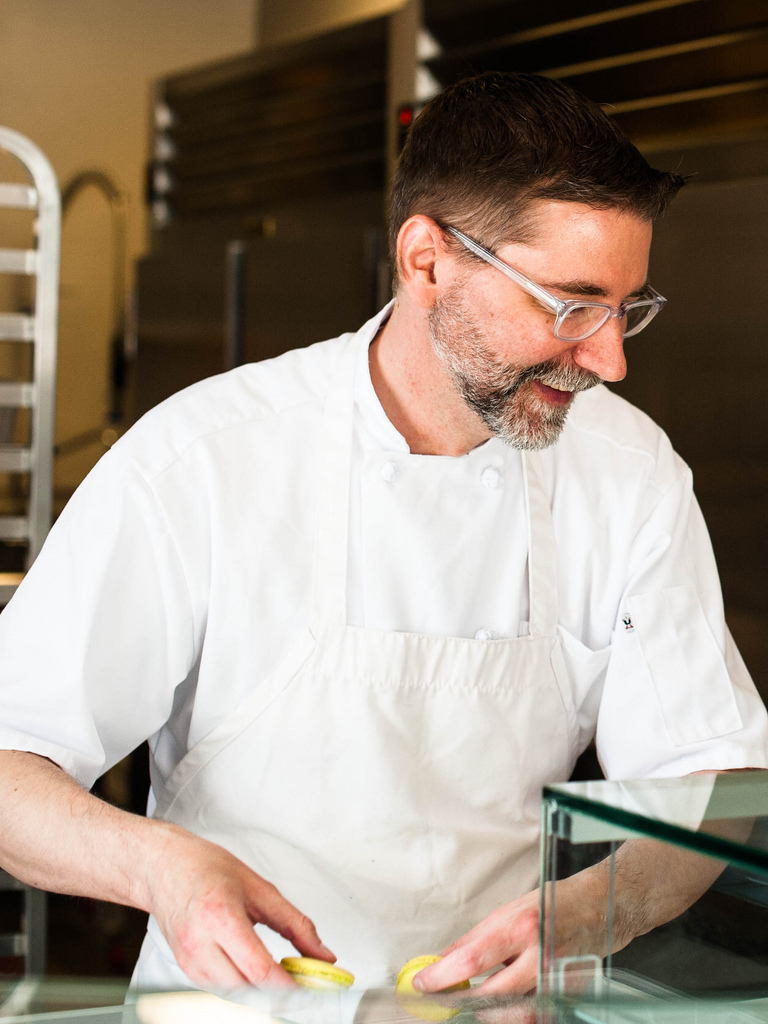 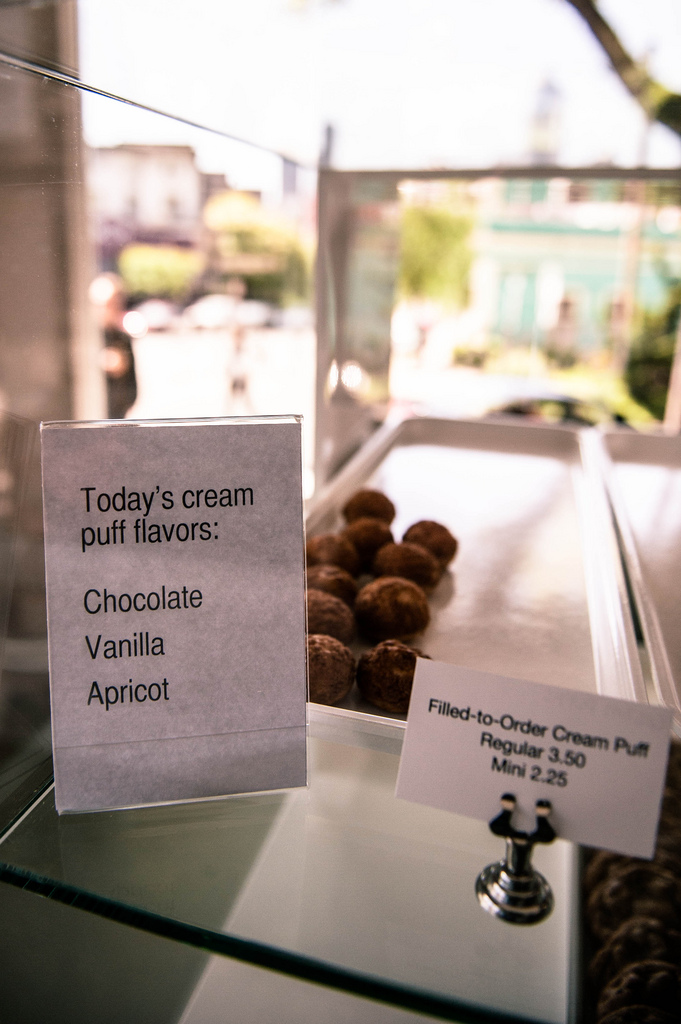 One of each, please (Image: Dave Lichterman for CHS) 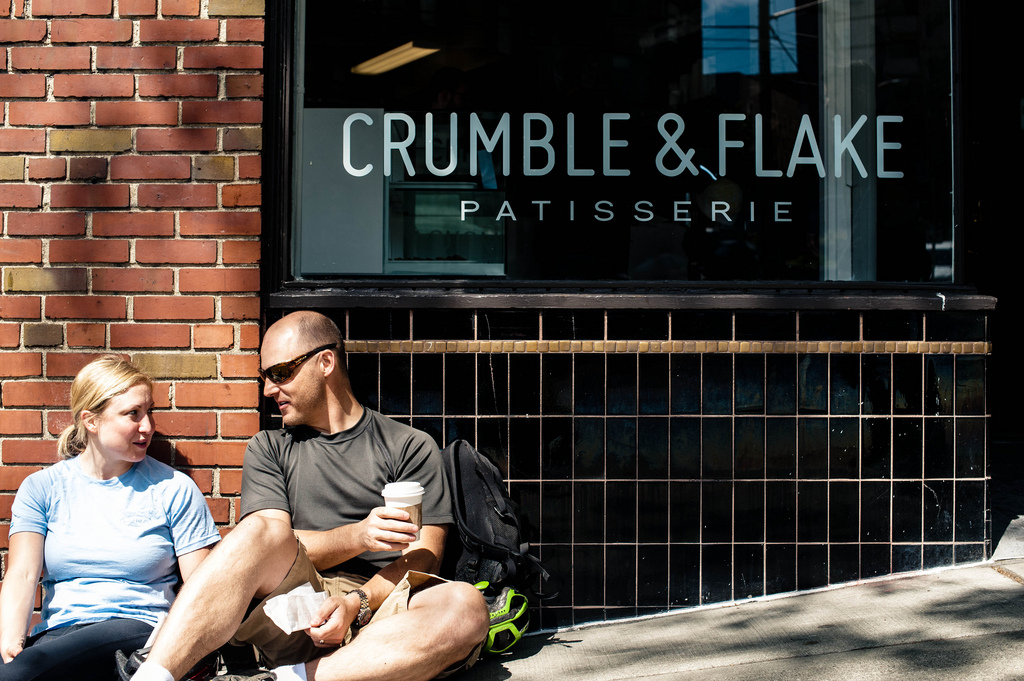 In Sunday’s debut, the tiny shop neighboring Montana and the Rachel’s Ginger Beer HQ was hit hard by enthusiastic throngs of customers leaving much of the pastry depleted but the macarons keeping up the pace.

Robertson said the new shop will keep hours 7a-5p on Tues through Fri, and be open between 9a and 4p on the weekends.

It’s a small space and dedicated almost entirely to the bakery and the display case full of treats.

“It’s a pastry shop, not bread,” Robertson told CHS last fall. “It will be mostly breakfast style, with some dessert-y [treats] and some cookies. We’ll start small and be seasonal.”

Caipirinha macaroons, cinnamon rolls, vanilla cream puffs, a “smoked paprika croissant and rhubarb financier” were just some of the delights people were a-Twitter about on Sunday’s opening.

The shop is located at 1500 E Olive way on the E Howell corner. Learn more at crumbleandflake.com. 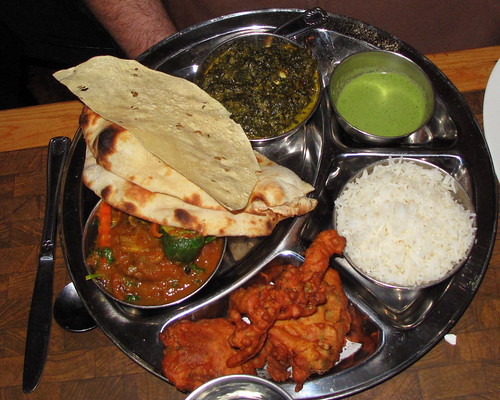 Finally- You don’t have to fly to LaDuree in NYC or Paris to have a GREAT macaron- try the green one, a sublime key lime pie-like flavor, or the rich chocolate, but get there early, because it looks like he will sell out quickly. Absolutely the best!

This isn’t a bakery. A bakery is a place where you can buy a loaf of bread. It’s a desert shop.

Monsieur/Madame, it’s a patisserie, just like it says on the window. A good macaron takes skill, training and talent to perfect. If you want Pillsbury, go to the frozen food section of your local Safeway.

I guess that I just assume that if it’s a bakery that they’ll carry a nice loaf of bread.

have you not been to Ba Bar? the macarons are sublime….

This begs a bigger question. Are the monolingual reporters of CHS so opposed to French that they chose not to differentiate between a boulangerie(bakery) and a patisserie, or is this distinction lost on the denizens of Capitol Hill who are looking for the next cheap baguette.
Any attempt to bring a more global, sophisticated perspective to Capitol Hill’s culinary scene should not be lost to rubes who would rather get drunk and tatooed then contemplate France’s culinary heritage and distinctions.

I want some Freedom Fries!!!

Thank you for bringing this gallophobia to light. I trust that the cultural ombudsperson will initiate a full inquiry.

But i too am sick of this exact type of shop opening up on Capitol Hill. It’s like these visionary entrepreneurs (and the banks that loan them money) think this is just a playground with children begging for sweets and places to play. Staples like bread would have been ok with me, even if you charged 7 bucks.

I believe someone once said “let them eat cake.” I say let them eat croissants, pan au chocolate and macarons. You don’t have to go there. You’ll be one less person in the queue when the shops opens.

Yeah, “someone” said something like that. I hope your naivety leads you to the same end as the first to utter that vile sentiment.

So much snark for the opening of somewhere so sweet! It’s a lovely thing to have in a wonderful neighborhood so just play nice. Sheesh.

I was being ironic, but that was lost on you. Today, France has brought the world socialism and “this exact type of shop” simply doesn’t exist elsewhere on the hill. “Fussy little cookies” indeed. Quelle domage!

Someone allegedly said that.

lolwut
open your own shop then, chief.