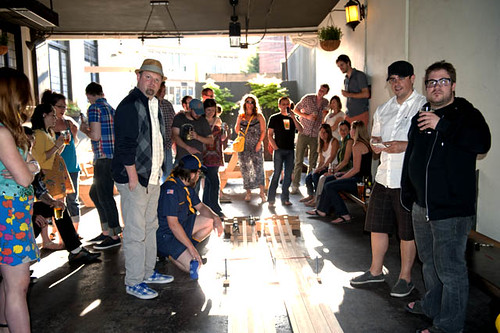 Monte Carlo has the Grand Prix.

Now, Capitol Hill has a racing classic of its very own. Saturday marked the First Annual Beer Can Derby, held at The Pine Box on Melrose Ave. One of the ten gadzillion events in the 2012 Seattle Beer Week (surely you remember reading about this in CHS last week?), the siren call of empty beer cans on wheels drew in a crowd of more than 150 spectators and 31+ contestants from all corners of the city and state.

Yes, it is one Seattle’s seven or eight Semi-Annual Sunny Days, but we’re sitting in the black-ceilinged, gothic-chandeliered loading dock of what is arguably the Hill’s very best coffin-themed bar that used to be a mortuary. (Morbid Fun Fact: We’re in the exact location where Steve McQueen, James Coburn, and other less-famous-people-we-don’t-care-about once carried Bruce Lee’s casket to a hearse.)

“The sun is overrated,” said Mike Clancy, a Seattle native whose beer-can car — a sleek, phallic design that resembles something you might find in the window of Babeland — was a winner of several early heats in the derby. Like the vast majority of participants, Clancy is a) male b) an engineer and c) very, very pale. And, for the record, very, very nice. But unlike so many NASCAR or Formula One racers, the life of a champion hasn’t gone straight to his head. (Just wait until he gets a sponsorship deal…) 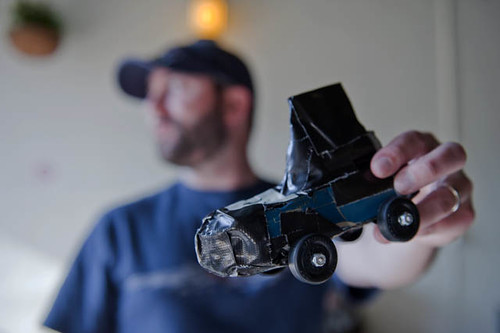 The Grand Champion of the event was Mike Besser, the eponymous papa of Brewdad.com, a beer blogger who traveled all the way from Olympia to participate in the Derby. Besser’s stylish and aerodynamic car swept several of the races — but not without a hint of controversy.

“His car was on a pine wood setting,” said Dean Hudgins, one of the owners of The Pine Box. “This is our first time doing this, so we didn’t specify cars couldn’t have pine-frame tracks, versus the regular tracks. The wooden axles run more smoothly, which gives them a slight advantage. That was our fault, but next year, we’ll be more clear in the rules.”

The highly successful (i.e., many people would rather do this than sit in a sunny park on one of the nicest days of the year) Beer Can Derby was the combined brainchild of Ian Roberts, co-owner of The Pine Box, and Steve Wood of New Belgium Beer. 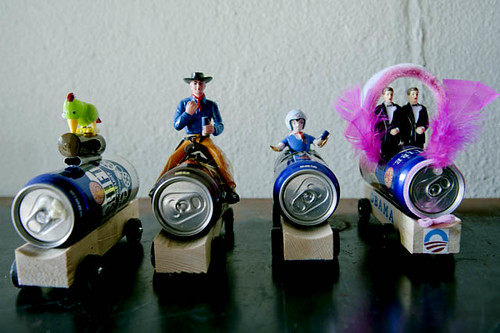 “It’s something I’ve been wanting to do for a long time,” said Roberts, when asked how he got the idea, and if he was, in fact, loaded at the time (amazingly, he was not).

In the Overall category, Mike “Brewdad” Besser took home the Grand Prize (some sort of Nerf gun?). The third place accolades went to Dori McGuire Guy, a.k.a., “The Danica Patrick of the Beer Can Derby circuit.” A math teacher at Seattle Central Community College, Ms. McGuire Guy recruited several of her students — including second place winner Justin Scott — to participate in the contest.

The races included an “exhibition race” made up of cars built by New Belgium. One of the crowd favorites was the adorable “Yes We Can” (get it? ‘cause it’s a can?) car, which celebrated same-sex marriage by featuring two grooms taking vows under a pink-feathered chuppah. In what I sincerely hope is not an omen for the future of gay marriage legislation in Washington, the befeathered, bedazzled car came in last place.

But I think we can all agree that it took home the prize for fabulousness.