With more news like this, perhaps there really is nothing to worry about regarding the future of E Pine between Bellevue and Melrose. A representative for developer Madison Development Group tells CHS that the Melrose Building and Pinevue Apartments building “will be kept” and integrated into the planned seven-story, 115,000 square-foot mixed-use development:

The Melrose Building (which houses Bauhaus) and the Timken Roller Bearing Company Building (which is the apartment building) will be kept. New construction will take place behind the Melrose and Timken buildings, and the new building will extend over a portion of the existing structures. Madison Development Group has an agreement with Bauhaus Coffee to be a tenant in the new building and they hope to retain some of the other existing tenants as well. The development team is taking the time to understand what’s most important to stakeholders and they intend to fully comply with the city’s provisions for the Cultural Overlay District.

Last week, CHS reported that the Bauhaus coffee shop has a deal in place to return to its nearly 20-year home at Melrose and Pine when the construction project is complete. Now comes this word that not just the facade of a single building will be preserved as in other projects but that the two old buildings will be retained.

There is no date scheduled yet for the first design review of the project.

A group has organized a petition to show support for preserving the buildings as part of the process to apply for landmark status for the structures — as of Tuesday night, it had more than 1,200 signatures. If the buildings are preserved, the project could be a boost for Pike/Pine’s small retail community and the architectural history of the neighborhood.

CHS has asked Madison for more details on their plans since our first report of the acquisition of the E Pine block in early April. The plan to retain the structures has apparently not been widely discussed. At a town hall meeting on Capitol Hill Tuesday night, Mayor Mike McGinn was seemingly unaware of the decision as he addressed the situation around the Melrose & Pine development.

The Melrose & Pine development is one of a handful of projects in motion that have thrown Pike/Pine’s preservation plans into question. With developers eligible to collect significant additional height and other incentives in return for preserving the facade of a “character” structure, there is concern that the rules make it too easy to demolish some of the remaining old buildings of the neighborhood.

One of the rulesets around the incentive program may be at play in the Melrose & Pine situation. CHS has learned that both the Melrose and Timken/Pinevue building appear on a roster of properties that cannot be demolished in conjunction with use of the Conservation Overlay’s incentives. A Department of Planning and Development “director’s rule” ratified the roster just before the Madison Group’s project was first brought to public light. The rule has been on the books since March but the developer and city officials that CHS talked with did not cite the condition. The director’s rule also was not discussed at the April appearance by McGinn at a community meeting held at Terra Plata where he was mostly grilled by attendees on why the city wasn’t doing more to shape the Melrose & Pine project. We’ll follow up with the DPD to better understand the rule and what it means for development in he area. 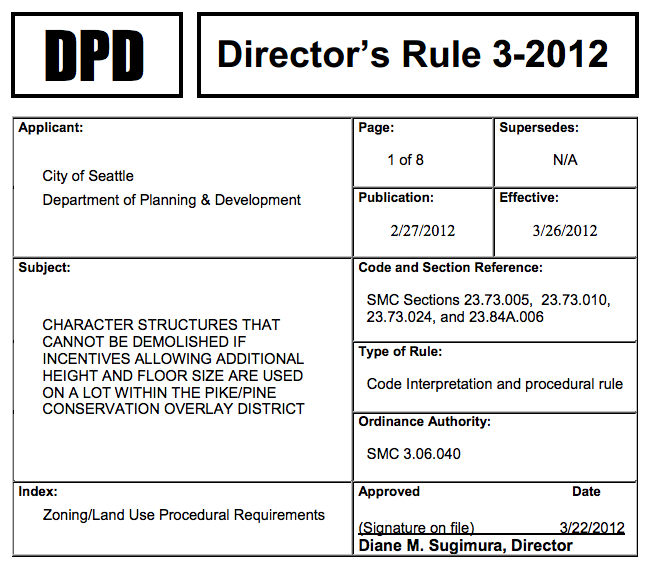 Wait no, not the mound house!!! :'( I feel like those are an awesome little piece of hill history.

Go right ahead and get rid of that surface parking waste though. Also that motel looking apartment building next to the parking lot. Some things aren’t worth saving (sorry anyone who might live in there).

…not falling. This week. But just wait until NEXT week.

Actually, preserving the buildings and constructing something around/over them might be an aesthetic monstrosity. Careful what you wish for.

How come no one knew or talked about the directors rule, especially the DPD? That’s kind of a big deal not to have out there in the discussion.

I think they are just saying what they think will get people off their backs! Only save the facade? Invite the rest of the businesses? Funny how they tell the press that yet they haven’t actually approached any of the other 8 businesses on the block, only Bauhaus. Le Frock has been in the same location for over 20 years, I don’t hear anyone championing them! What about Wall of Sound and Spine and Crown? Funny how the developers say exactly what you want to hear and do exactly what they want to do, and I’mm supposed to trust their word? Get real! Nobody will be able to afford the new rents. What about the affordable housing? Where will the people who live there go? Nice try developer, We don’t believe your line!

I’ll believe it all when I see it.

I have the same issue with this. I would be fine with a new building (assuming tastefulness) as long as it preserved the small storefronts that make the area so diverse.

Stay in your home. Never leave. You will be safe there.

It worked out fairly well for the building at 12th & Pine…it’s nice that at least at street/pedestrian level, the historic look/feel is maintained. It’s better than a tear down, but of course, I wish they were leaving it as is.

If these buildings housed a cleaning supply company I doubt anybody would care. All the buildings there are not worth saving…it’s the businesses that will be displaced that are what needs saving.

Once whatever renovations are made rent hikes will be sure to force out the majority of them.

this doesn’t change the outcome for any of the existing businesses, with the exception of bauhaus

Because I don’t know what this means: “the new building will extend over a portion of the existing structures,” I’m starting to think that fully retaining the Pineview building and just saving the facade of the Bauhaus/Melrose building might be a better compromise. Almost all of the small businesses on the block would be retained, Bauhaus would return in the new home, and we add some good density where there is currently only a single floor.

Correct me if I’m wrong, but isn’t this just the general idea of the Overlay? If you protect character buildings, we give you some bonuses. If you don’t, we don’t.

My understanding is that there is some ambiguity within the framework. For example, does protecting just one of these buildings provide the height bonus to the entire project area, or just the lot of the character building? Also, what exactly constitutes protection? Can you just keep one wall of a facade and then get the bonuses?

It is the “general idea” but the director’s rule seems to designate a set of buildings that couldn’t be demolished, say, in the event a developer cobbles together multiple parcels that include multiple character structures but only intends to preserve the facade of one. It’s an interesting rule and I’m still surprised it’s newly introduced to this discussion.

As for specifics of the bonuses, one requirement is that all street facing components of the facade must be preserved.

I’m a bit sad about the mound house, too, though I realize that is totally irrational since it’s such a poor use of that space.

I think a case should be made for the TARGETED historic preservation of the OTHER mound house, mid-block at 1516 Melrose. It is better preserved and in better physical shape, is visible from the front windows of Melrose Market, but is on a skinny enough lot that it would never be able to add nearly enough additional residential or commercial value to the neighborhood to negate its value as a historical artifact.

Ah, I see. Thanks for the insight! Very interesting indeed…

Please keep us in the loop with regards to this part of the story. I would be interested in which other buildings are also on that list.

Developers should not be able to purchase the right to destroy old, architecturally attractive and interesting buildings.
I also believe that the current codes for building heights are wrong.
Seattle’s skyline is already becoming so crowded that it will soon become an undistinguished blob. Downtown is losing all human scale as well.
What ever happened to the rules for setbacks and green space? We’re well on our way to becoming solid cement if we continue down this path.

I used to love spending time downtown – no longer. I moved here 20 years ago, choosing Seattle over Portland. Now I think I made the wrong choice, but I’m almost 77 and my friends are here, so I’m stuck.

OHYES, Thanks buddy, I’ll huddle in my home until the wrecking ball comes. That will really help, just as you have been soo verry helpful!