As Capitol Hill Block Party has grown from a street festival into a three-day musical extravaganza that will draw more than 30,000 to Pike/Pine this July, the two main men behind the annual production are stepping aside. In a statement released by CHBP organizers, Marcus Charles and David Meinert said the end has arrived for their rule of the Block Party and that a new, local business owner is taking over production of the festival — and bringing along some new fun including a family-friendly morning of rock, a new arts program and a slew of social media-friendly additions.

“For 11 years Marcus and I worked to make Capitol Hill Block Party one of the most credible small festivals in the US, with Jason booking the talent that helped elevate it to a nationally recognized event,” Meinert said in the statement. 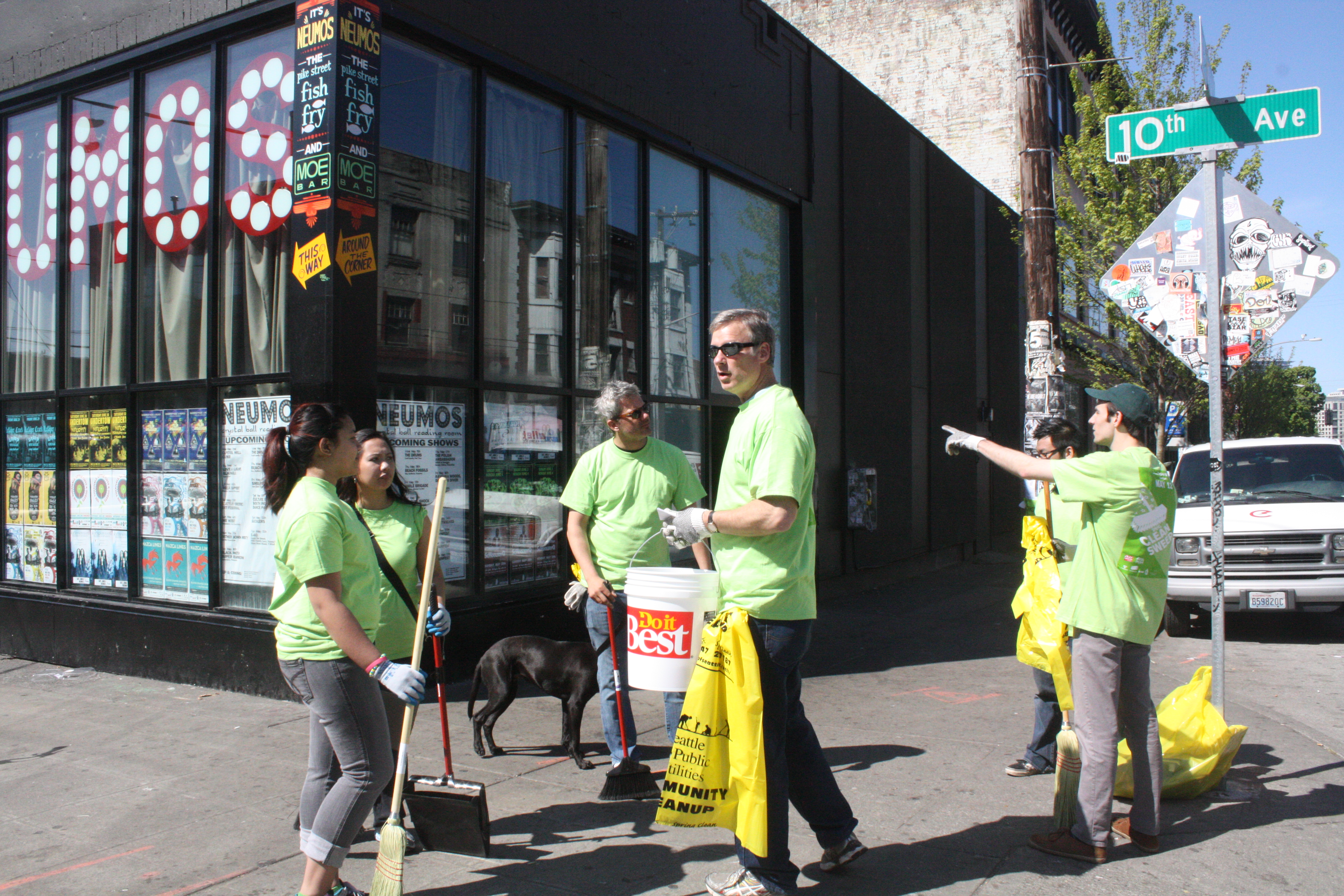 Lajeunesse, center with his dog, helps at a recent chamber of commerce street sweep (Image: CHS)

“With both of us having started new families and opened new businesses, it felt like the right time to pass the reins. There is no better person in this community to continue producing the festival with the original vision with an eye toward expanding and evolving the tradition.”

The announcement puts to end months of rumors about coming changes for CHBP. Stepping forward as the new Block Party owner is Jason Lajeunesse who served as co-producer in 2011.

Block Party has grown into one of the big Pacific Northwest music events of the summer with attendance on pace to surpass 30,000 attendees again this July. We looked at the logistics around the unique production on the streets of an active, open for business city neighborhood in 2011. Check out our Day One | Day Two | Day Three open threads for coverage and images from the neighborhood perspective at the 2011 Block Party.

The 2012 festival — marketed with wink toward the announcement of new ownership and the Mayan calendar — has been billed as “the final” CHBP and will include Neko Case and Major Lazer on the bill. As part of the change in ownership announcement, organizers also released the remaining acts for the 2012 planned line-up:

Lajeunesse increases his role in Pike/Pine’s nightlife cutlure and in the Capitol Hill business community with the deal. Lajeunesse is also part owner of Neumos, Moe Bar, Big Mario’s Pizza, Barboza, Pike Street Fish Fry, and Sealed With a Kiss Presents. He serves on the board of the Seattle Chamber of Commerce and is on the Advisory Board for the Music for Marriage Equality campaign, according to the CHBP statement. Earlier this year, CHS reported on a new 10-year lease for Neumos to remain at 10th and Pike. Meanwhile, Barboza debuted beneath the music club earlier this month. 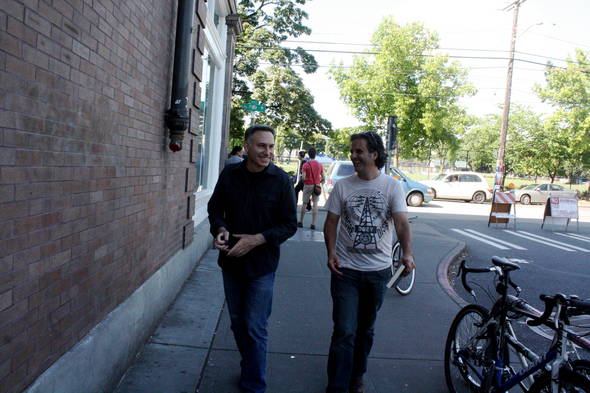 The shift for Meinert is also significant for the neighborhood and the Pike/Pine business community. The move reduces Meinert’s role in Pike/Pine though he retains part ownership of Big Mario’s and will likely continue to be an outspoken supporter of Seattle nightlife. Meinert was the face of the festival as it grappled with the challenges of working with area business owners who are negatively affected during the annual festival as fences dominated the streets and sidewalks, trash can occasionally pile up and walk-in business can trickle to nothing. In the past year, Lajeunesse has taken on more of the community work around the festival including his work with the Capitol Hill Chamber of Commerce.

Some of this work will manifest itself during the 2012 Block Party as new elements expanding the scope of CHBP are rolled out.

Earlier this month, CHS reported on a new arts program being added to the Party headed by Capitol Hill’s Ghost Gallery owner Laurie Kearney. Today’s statement includes more information on that and a new family-friendly addition to the 2012 festival — a Cupcake Royale-headed Sunday “COMMUNITYFAMILYFUNFEST” rocked by headliner Caspar Babypants:

ALL-BROW VISUAL ARTS PROGRAM: Ghost Gallery’s Laurie Kearney is curating a collection of multimedia art to be viewed at this year’s CHBP. Installations by local and regional artists will be at specific locations throughout the festival grounds. Ghost Gallery’s mission for this project is to create a dynamic, visually striking art program for the CHBP, engaging festival-goers with an exciting variety of site-specific, locally made art. Laurie Kearney founded the Ghost Gallery project in 2006, with the goal of making original art more accessible by exhibiting artists in both traditional and non-traditional spaces. With 30,000 expected festival-goers, CHBP is the perfect non-traditional space for engaging our local artistic community and providing a dynamic, interactive environment for visitors of all ages.

COMMUNITYFAMILYFUNFEST
CHBP and CupCake Royal will present a free family fun event  on Sunday July 22 before the start of the festival from 10am-12pm. There will be free ice cream, lemonade and doubt dutch from 10-11am, followed by a free show at Neumos with Caspar Baby Pants from 11am-12pm. Local Capitol Hill business The Sweat Box will also host a free yoga class on Saturday morning from the CHBP main stage.  The event is free and promises to be the perfect cure for your hangover and while keeping the kids entertained.

The festival this year will also include a live simulcast on the Internet so the world can enjoy the spirit of Pike/Pine from the comfort of its Internet connection as well as a bloggers’ lounge tricked out for social media mavens to document the Block Party.

“We are very excited to be introducing new creative endeavors to the festival,” Lajeunesse says in the statement. “I’m proud of the team we have in place, and honored to be able to continue the CHBP legacy, in my favorite neighborhood in the nation.”

Big Mario’s is a CHS advertiser.

For those interested there will be a community meeting to discuss this year’s Capitol Hill Block Party on Tuesday, June 5th, 5:30pm, upstairs at Caffe Vita. You can ask about the changes mentioned in this article or share questions or concerns about this year’s event.

I will not be able to attend the meeting, but I am curious if there will be any change to the placement of the stages from the past 2 years?

Hey megan, to answer your question. Yes, the stages will remain the same. The site map is exactly the same as last year.

Escape into the streetcar construction? Can’t you find something substantial to grouse about?

This block party messes with many local businesses that arent sponsors. Emersonsalon, retail therapy, sweatbox, frame central and more. My business isnt compensated for loss except for free tiickerts whi ch doesnt really matter to me or most of my clients. I dont care about the bands! I sm..not available to go to the meeting and it doesnt matter because weve tried to address these concerns with them before. Sweatbox was even thinking of suing. A new showrunner most likely isnt going to change a thing

I heard something on the radio about designing a kid friendly t shirt for, I think they said the Lumineers band, / for the capital hill block party. Does anyone know about this? I heard that one of the designs submitted will be selected.