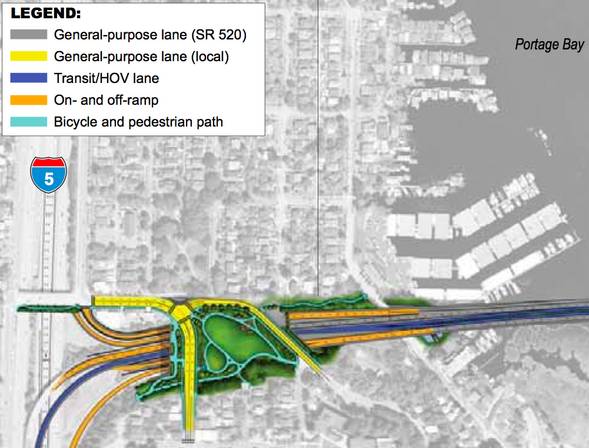 An early diagram of the Roanoke Lid

Montlake: Gateway to Capitol Hill. Just kidding, Montlaker. Kind of. From a transportation standpoint, the gateway thing is kinda true. Though we’re sure there is much more to Montlake than just being a waypoint to Capitol Hill. Here are details on public transit project and meetings in the Montlake area that have bearing up here on the plateau.

The last time the public was updated on plans for the Roanoke Lid was December 2011 so there should be significant progress announced this week. WSDOT’s method for collecting community feedback is through post-it note comments plastered to the drawings presented at these meetings — so show up and plaster away your opinions.

CHS wrote about the component’s potential for creating a new biking and walking route to the Hill.

Permanent station names
Every day,  Sound Transit is making progress to extend Link light rail from downtown Seattle to the University of Washington. Up to this point, we have been using a temporary, or working, name for both of the University Link stations.

But we’re now approaching the time for the   Board of Directors to formally adopt permanent station names. For both stations in the University Link project the proposed permanent name is the same as the working name: Capitol Hill Station and University of Washington Station.

Over the past several months, we have been talking to community members and stakeholders about potential permanent station names. We’d like to recommend that the Sound Transit Board formally adopt permanent station names as early as June. As part of the process, we are collecting feedback to provide to the Board on the proposed names.

If you have comments on either of the proposed University Link station names, please take a moment to send an email to [email protected].

The TBM arrival and removal of a headwall between the mining operations and the DSTT means there are now twin tunnels running 3.1 miles between downtown Seattle and the University of Washington (UW). The contractor team, JCM U-Link Joint Venture, mined two tunnels, each about one mile long between the site of the future Capitol Hill Station and downtown Seattle. A separate contractor completed the twin tunnels between UW and Capitol Hill in early April.

The contractors will now focus on excavating 21 cross passages between the two bored tunnels by early 2013.

Overall, the $1.9 billion project is about halfway complete and scheduled to open in 2016. Between now and then contractors will finish stations at UW and Capitol Hill, install communications and power systems and test the new line.

View a narrated video created by U-Link contractor Traylor Frontier Kemper, JV on the completion of the tunnel boring operations.

What is a Cross Passage?
Since U-Link tunnel boring operations are now complete, the contractor is focusing on building the, which are walkways that connect the two light rail tunnels that provide a safe means of egress in case of emergency once the trains are running. Building the cross passages is one of the most challenging tasks in the development of a tunnel project. Miners must sawcut through the concrete tunnel liner, hand dig across to the other tunnel and then cut through the other concrete tunnel liner to complete the connection.

In addition, analyzing ground data and providing support before, during and after building the passages takes several steps. A total of 21 cross passages are needed in the University Link alignment, with completion scheduled for 2013.

If you have any questions/issues, or would like weekly updates on construction activities including information on road closures, detours, nighttime work and bus stop closures, you can visit the First Hill Streetcar website at www.seattlestreetcar.org, email: [email protected] or call their construction hotline at (206) 257-2121.

Work begins on Pedestrian Bridge over Montlake
You can’t tell from the sidewalk, but there are actually two contractors working at the UW Station construction site. Hoffman Corporation, the contractor responsible for constructing the UW Station, is building the station from the top down and has reached the bottom. As they continue building the formwork, installing bracing and pouring concrete for the invert slab, you will start seeing work outside of the construction wall this summer. The contractor is scheduled to start the pedestrian bridge work over Montlake Blvd. this July and continue work in the street throughout the summer. Look for more details in our future newsletters and construction alerts. This work is part of a larger project by Sound Transit, the University of Washington and WSDOT to redesign one of the major non-motorized entrances to the UW Campus, also known as the Montlake Triangle or lower Rainier Vista. See an aerial rendering of how the Montlake Triangle and station bridge connection will look once complete.

Looking at that rendering of how the Pedestrian Bridge will look, I wonder if it was the last work of the late Thomas Kindade?