Here is the latest from the mean streets of the East Precinct. Know about a crime we missed? Let us know.

This message to members of the Seattle University community is being sent via SU e-mail in the interest of public safety and crime reduction. Since the start of summer bike theft reports have increased to approximately two reported thefts each week, over the past six weeks. Bikes secured with cable type locks are being cut, and bikes secured with harden steel U-bolt locks are not being reported stolen. Public Safety recommends all bicycles be secured to an available bicycle rack with a high quality U-bolt lock or case hardened chain with a quality lock.

By the way, this is a map (source: SPD) of the bike thefts reported to police since June 1st. Also by the way, here’s what happened when CHS left the CHS-cycle locked in Pike/Pine all weekend (long story). 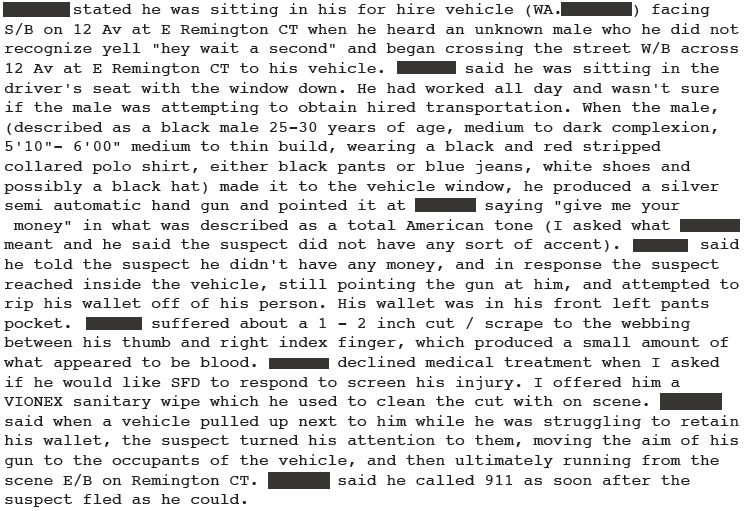 The women in the car who intervened told police they were driving through the area when they saw the struggle and stopped to see if anybody needed help. When the suspect with the gun turned his attention to the women, the driver sped away and the suspect fled. SPD’s search for the suspect was not successful.

Anyone locking up their bikes with a cable lock is a dumba$$. Using cable locks to lock up your bike in a city environment has been a stupid idea for over 20 years! U-locks were standard equipment for urban dwellers even back in the early 90s.

Mid 90’s? Ha…longer than that. I was in college in the late 70’s, and even then we knew cable locks were useless. U-locks have been around since the mid-70’s, and anybody with any sense has had one since then. If they want to keep their bike, that is.

yup, i’m one of those dumbasses, I used a cable lock to “secure” my Giant Defy for over two years, and then the inevitable happened two years to the day that I bought my bike: a quick stop at the Broadway Market QFC, and within moments the cable was cut and my luvly bike gone for good. And this was on a crowded street, within feet of the annoying bald guy always selling Real Change. I’m not sure about the accuracy of that SPD map; i reported the theft right away, but there’s no little bike symbol where it happened.

Just as an aside – I just a little dumbfounded that someone would keep that much in rolled coins at their home: “According to the SPD report on the burglary, a thief made off with around $400 in rolled coins…” . I bartended for years and never had that much coinage around – plus that can’t be that easy for a thief to carry off?