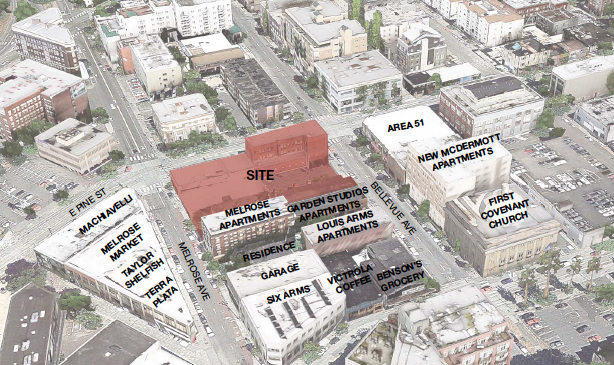 A recurring theme in recent analysis of the Pike/Pine Conservation District’s effectiveness is the overlay’s weakness in shaping developments that amass several adjoining parcels. Details of the deal that will put the six parcels owned by an entity called M&P Partnership into the hands of the Madison Development Group are not yet public but the land’s longtime owners — the Lucurell family — will likely be part of one of the most expensive real estate transactions in Capitol Hill history.

Wednesday night, the development plan for the project that will combine those parcels and incorporate three Pike/Pine “character structures” in a “seven-story residential apartment building containing 180 dwelling units and 14,000 sq. ft. of commercial space and 2 floors of below grade parking for 120 vehicles” came before the East Design Review Board and faced a significant challenge.

How to make a seven-story building achieve a bulk and scale that relates to the spirit of the old buildings the developers plan to preserve?

“The pledge by the developer is to absolutely replace it in its current proportions,” architect David Hewitt said during his presentation Wednesday night. 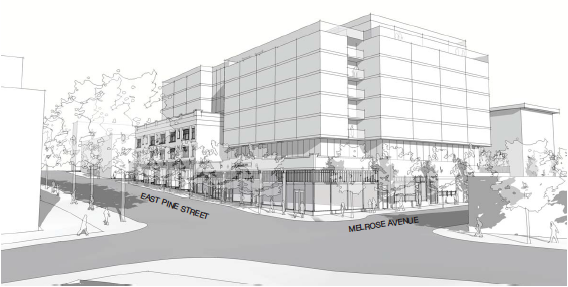 The preferred massing. Is it possible to design something big enough for 180 units, small enough not to look ginormous?

The East Design Board was mostly satisfied by what it saw and heard, sending the Melrose & Pine project forward to the final recommendation phase of Seattle’s design review process. Another meeting will follow in coming weeks putting the project on track for a start of construction next summer. But the board echoed sentiments from the public comment period that the project plan needs to do more to make the new structure feel like less.

“We want to see the design articulate the feeling of separate buildings and diminish the fact this all one building up there,” the board’s Wolf Saar said summarizing the expectations for the developers as the project moves forward.

When CHS first reported on the deal, public outcry was significant. Wednesday night, there were relatively few public comments with only ten speakers weighing in on the project. Representatives from the Pike/Pine Urban Neighborhood Council said they had met with the applicants “several times” and that the council was “very excited” about the proposal that is “clearly aligned” with the Pike/Pine overlay. 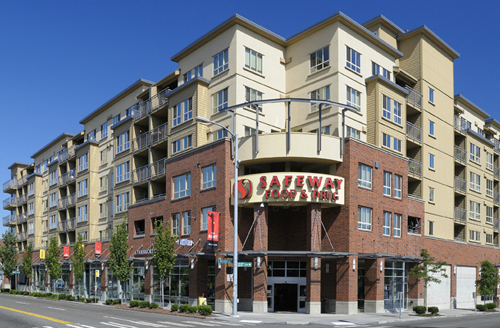 But there were some new voices to the conversation. A resident of the nearby Pike Lofts said he was concerned about the 115,000+ square-foot Melrose & Pine project’s bulk and scale — “The volume and bulk — these are simply giant boxes full of windows not a group of smaller buildings,” he said while warning about the Madison Group’s past development of the Summit at Madison project at 23rd and Madison. “I don’t want to see a big, blank wall,” he said.

Other speakers were happier with the project. One who lived nearby thanked Hewitt for coming up with a scheme that preserves the continuous stretch of retail on Pine. Another said he hoped that the construction to support the multi-story apartment portion of the new project wouldn’t significantly alter the existing retail and cafe spaces.

Proposal
The Pike/Pine Conservation Overlay District was established by the City of Seattle to set for the development guidelines that preserve the neighborhood’sunique design character and historical legacy, while acknowledging its future growth as a designated urbanvillage.

Due to its prominent location and importance to the cultural life of the neighborhood, the Melrose and Pine project will set a precedent for creative implementation of the Pike/Pine Neighborhood Design Guidelines andPike/Pine Conservation Overlay District legislation. 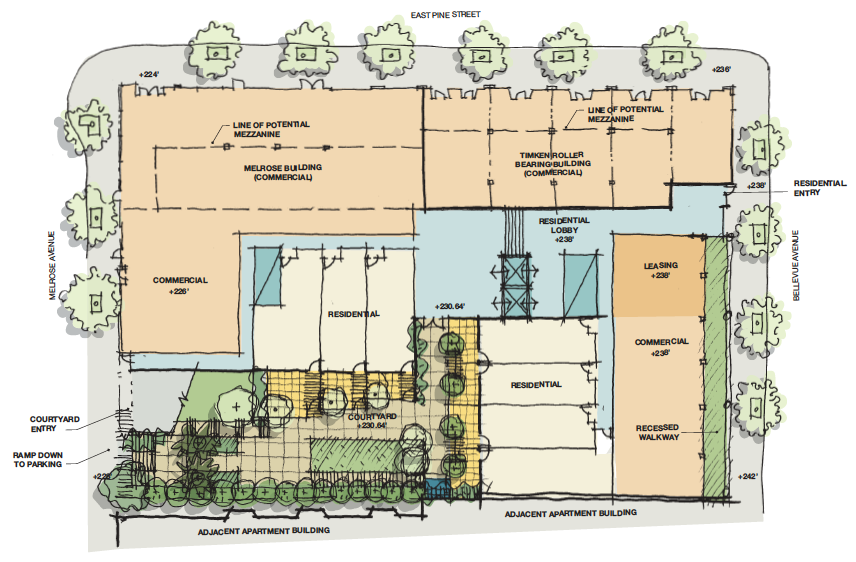 Though the developers call out only two “character structures” the project is ultimately planned to preserve components of three old buildings in its design. Included in the Melrose and Pine acquisition is the Timken building (1), the 1916 masonry building currently home to Mud Bay, Edie’s, Le Frock, Vutique, Scout, Wall of Sound, and Spine and Crown as well as residents of the upper floor apartments, an old mound house destined for demolition, the 1917 Dirty Jane’s building (2) home to Warren Knapp Gallery, and the 1915 Melrose Building (3) that houses Bauhaus, the Emerald City Inn apartments and a Bellevue Ave parking lot. Timken, Dirty Jane’s and the Melrose Building are destined to join us in the seven-story future.

On Wednesday, CHS reported that Bauhaus, already signed up to return to the project when construction is completed in two or three years, is set to open a second location in Ballard.

In exchange for preserving the street-front facades and what Hewitt called the “floor lines” of the two main character structures, the Madison Development Group seeks to take advantage of Pike/Pine’s conservation incentives that will grant the project 10 extra feet of height for the effort pushing the structures up to 75-feet tall along E Pine.

A MDG spokesperson told CHS this spring that the Lucurell family had been looking at their holdings and were either going to make seismic upgrades or sell the land. The family would have had to spend millions retrofitting the property, the spokesperson said, as the buildings need significant investment. With the renewed vigor of the development market, the sale moved forward.

“We don’t know yet,” architect Hewitt said Wednesday about the condition of the buildings and the degree to which they will need to be rebuilt to be part of the new development. “It appears that the Timken Building is pretty sound. The Melrose building is in a little worse shape.”

Hewitt called Bellevue at Pine’s Timken Roller Bearing Building — now the Pinevue Apartments — the “Apple Store of its era” due to the revolutionary ball bearings the company sold.

The area near the Melrose & Pine project is seeing heavy investment — and some additional effort around preservation. Hunters Capital earlier this year announced it had acquired the building home to Area 51 across the street for $3.85 million. Hunters is in the middle of its project to restore the building’s facade. On Melrose near Pike, the future home of restaurant Mamnoon is being overhauled. Meanwhile, work is underway on a mixed-use development at Pine and Bellevue.

At the center of this development, the much-loved Melrose Market project has done much to influence the direction of nearby construction. Wednesday night, the board also advised the Melrose & Pine development to figure out a way to move its planned parking entrance from Melrose to Bellevue to keep the traffic flow away from the popular retail area. The Melrose side of the project is also planned to include the entrance to an l-shaped plaza — non-public and gated off from the street.

The board also did what it could to raise the bar for the project’s aesthetics. “This is a very significant building,” board community representative Saar said about Melrose & Pine. “It’s setting a standard so we’ll be looking for high level of materiality and craft.”

Earlier in the night, Madison Development Group’s Tom Lee thanked the community for being part of discussions over recent weeks to further shape his project. “It shows how much passion they have for their neighborhood,” Lee said.

The property at 22nd and Madison is horrible and aesthetically hostile to it’s context. Being within 3 blocks of it is annoying.

Good thing this article isn’t about that building.

I attended the review last night and was happy to see the developer has been listening to the community and is preserving the structures. Overall I think this is a pretty good example of how the design code (overlay district) should work. Say what you will about their previous work, but so far so good on this project. As long as they put money into finishes and the details then this should turn out pretty well. I wish it were several structures rather than one big one, but they have to make a return on their investment. You can’t have it all.

It’s not that bad. We live a few blocks away, and walk by it all the time, and it’s just fine. It may not be the most beautiful building in the world, but it works, and has retail spaces on the sidewalk (as opposed to the ridiculous Safeway on 15th) so it activates the sidewalk. It’s a heck of a lot better than what was there before.

I really don’t understand the complacency about this development. WHY can’t the community have it all? This massive block will wipe out the invidividualized “nooks and crannys” that the small, diverse retail spaces offered at the street level. It’s not just the footprint AND scale, it’s the materials, the patina, the variety of elevations, even the existing doorways are different from one another. Personally, I don’t think Madison Development Groups past work is good. Sure, we all get used to things — look at the ghetto Belltown has become. Does anyone even remember Belltown before the hall of towers was built? Why doesn’t Seattle consider the long term investment of their neighborhoods? I mean, is this the best that the neighborhood deserves? Nope. I’m watching from a distance, and hope that the community doesn’t default to the “well-they DO need to make a return on investment”. Seattle – they’ll be okay. The block is thriving now. How will this monster development infuse cash into the existing retailers business? Or, is that not the point? I am guessing we ALL know the answer.

I actually do remember Belltown before it was built up. There were a lot of old and dilapidated buildings interspersed with one and two-story buildings that were nothing to cry over.

Look, did Belltown loose the character it had and there are things that are missed. But Capital Hill is such a vibrant, energetic and culturally relevant part of Seattle, which Belltown never was, that more density is not going to have the same results. Especially with people willing to stand up for the neighborhood’s character.

I think the developer is planning to keep the existing retail windows, door ways, and finishes to maintain a history in the character buildings. I know for sure they the retail spaces will stay the same size (nook like).

I do remember Belltown before it was built up, Canudos, and I disagree with you. Belltown was a vibrant artist community because rents were cheap. There was an amazing synergy to the blocks then. Yes, there were run down buildings, but what adds to an interesting neighborhood is economic as well as other forms of diversity. Seattle blew it when it came to Belltown. What about the block that held Man Ray, Cha Cha, Kincoras – remember that one Canudos? How is it unique now? It’s not – just more of the same like its neighbors.
“Learning to love more neighbors” – is that the singular message of this development? Again, I say that’s not enough. Good design should be able to do more than that, and the nieghborhood deserves it.

every new development on capitol hill looks the same, looks like every other new development everywhere else. Cap Hill is about ART CRUSTY KIDS GETTING WEIRD DOIN YOU GRUNGE OLD AUTO SHOWROOMS HUMAN SCALE CHARACTER…so….somebody actually DESIGN something for the hill. OR just keep on gentrifying everything and everyone/thing that makes cap hill CAP HILL will move out and you’ll have yourself another Bellevue! jus sayin’