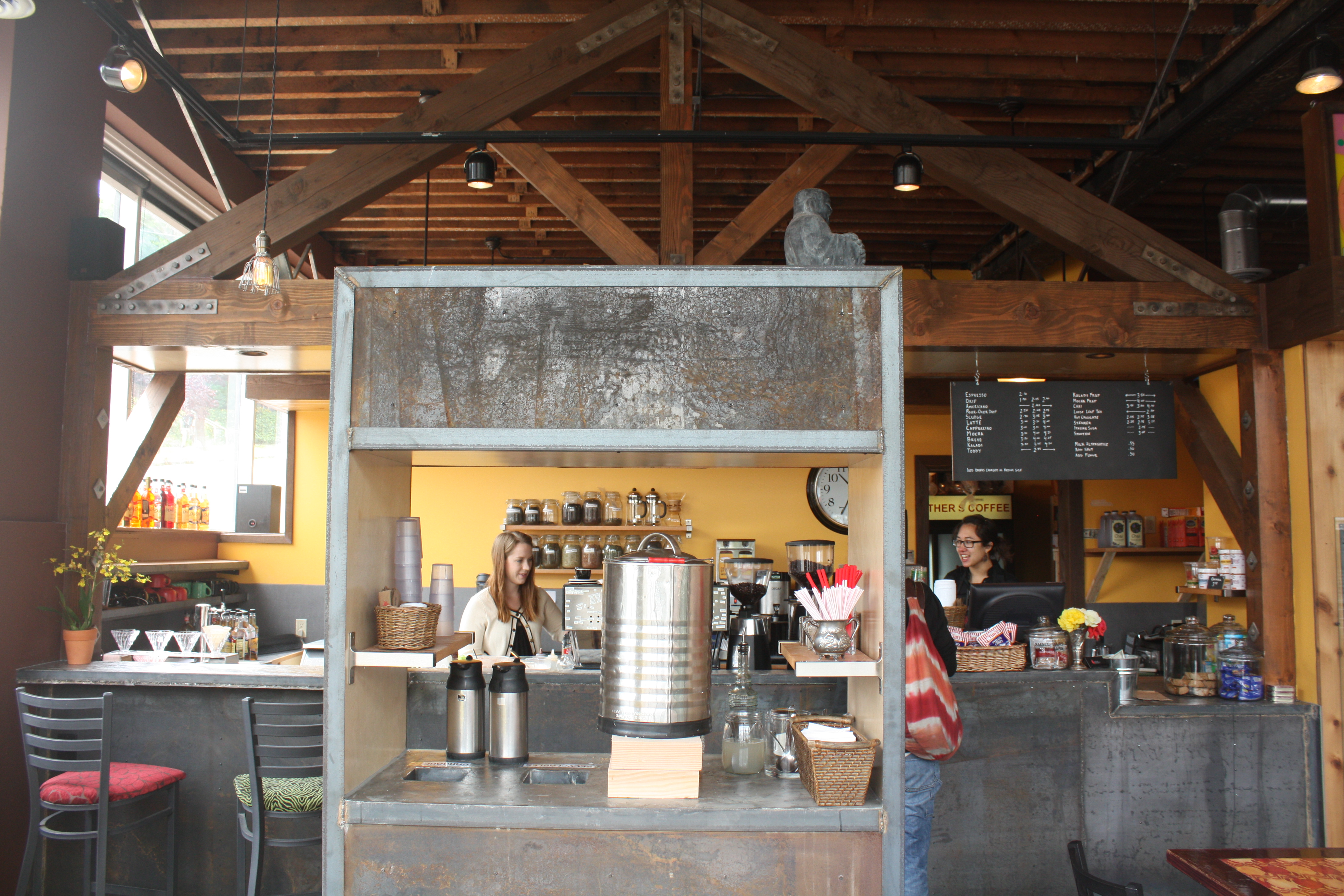 Double-short latte for me. You? Tip us at here.

We talked to Chip Ragen earlier this year about the overhaul of his building at E Pike and Belmont to create new spaces for health nonprofit Gay City and Kaladi. Ragen said he considered selling his property for development or investing in an expensive seismic overhaul that would have been required to create a new restaurant space. In the end, he settled on a compromise. Restore and reinforce the 1910 building in an overhaul designed around his existing tenants. It still cost a pretty penny — more than $200,000 — but the transformed space creates an improved business opportunity while — literrally — exposing the building’s auto row past complete with cool old beams and the giant cast-iron central beam looming above. 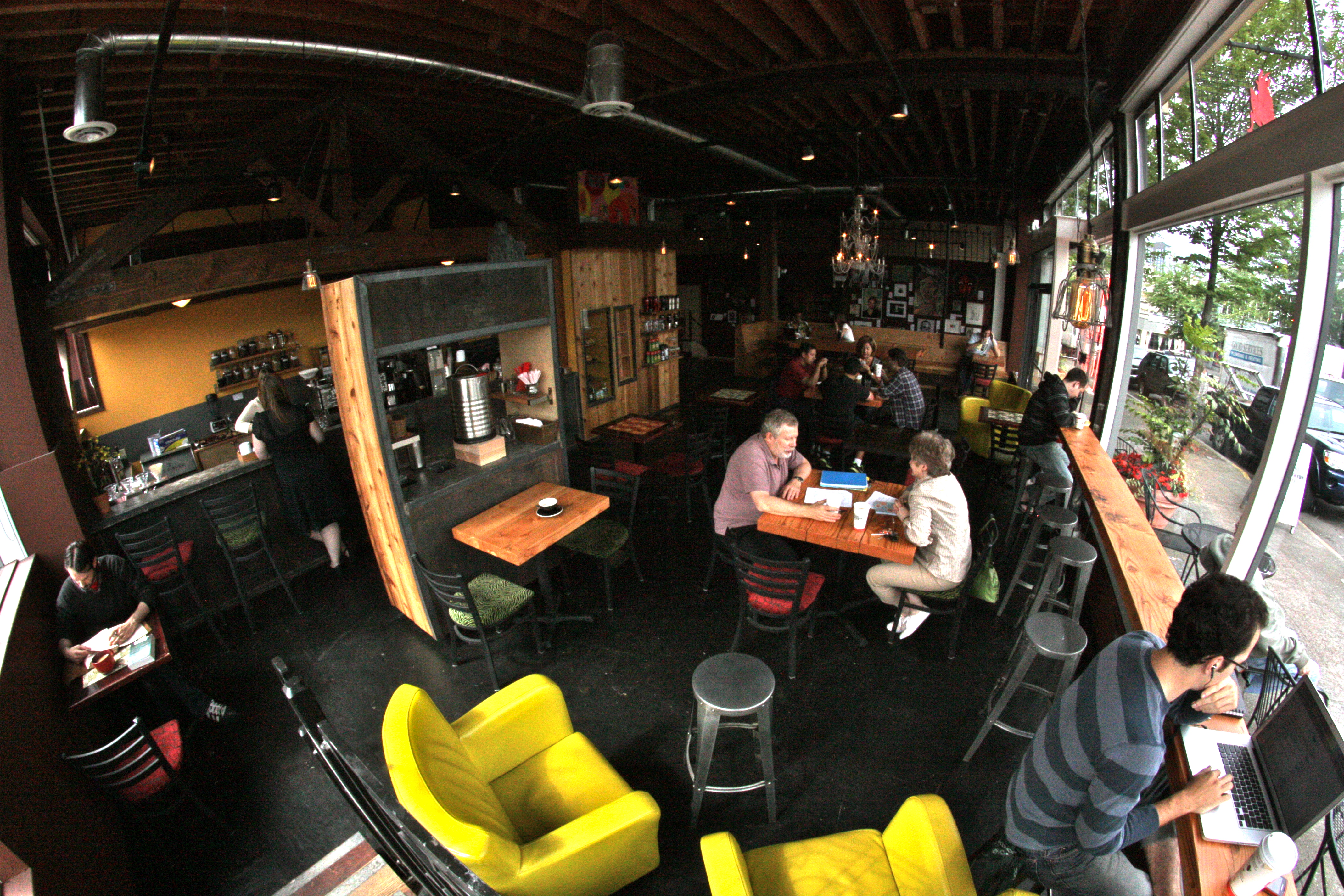 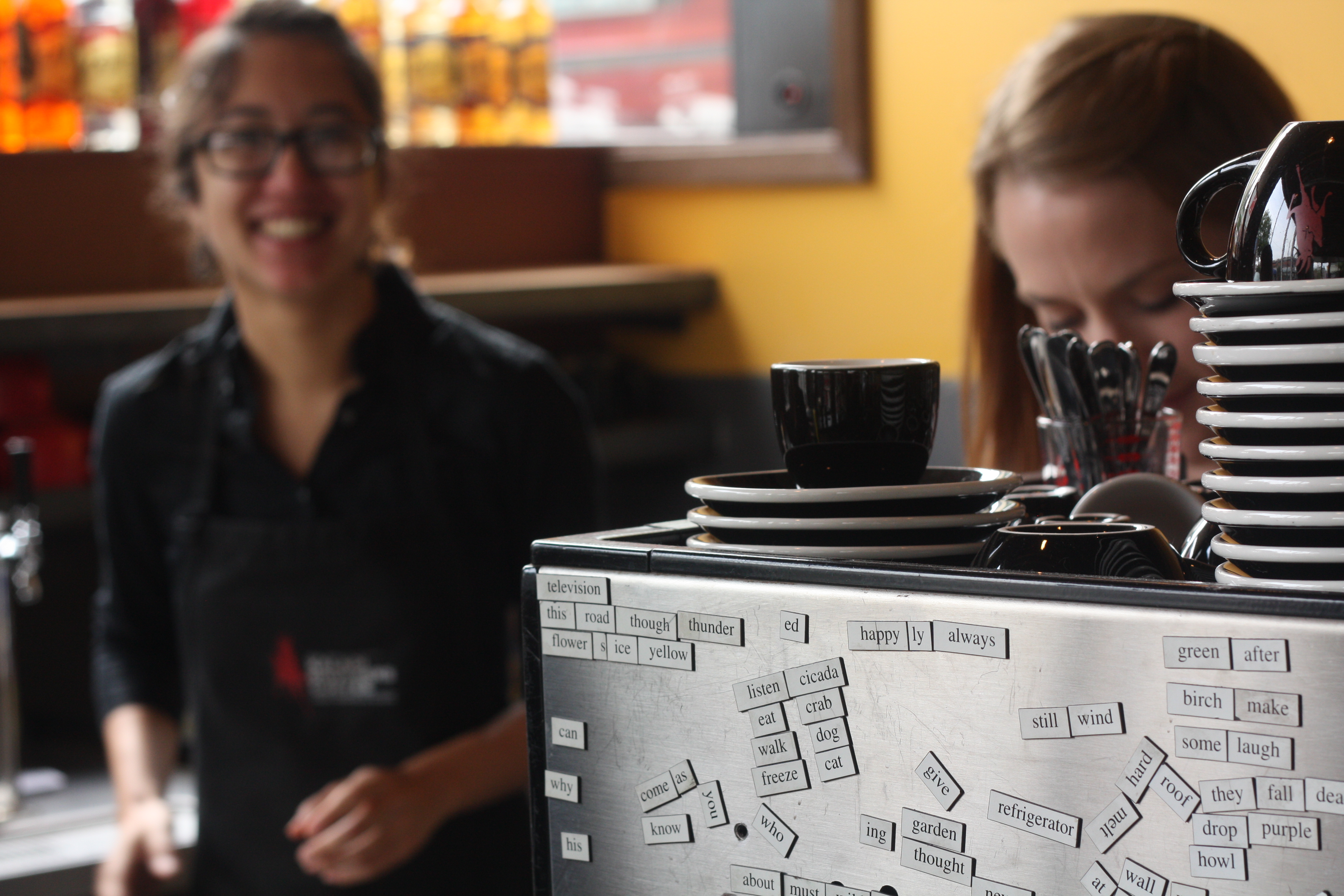 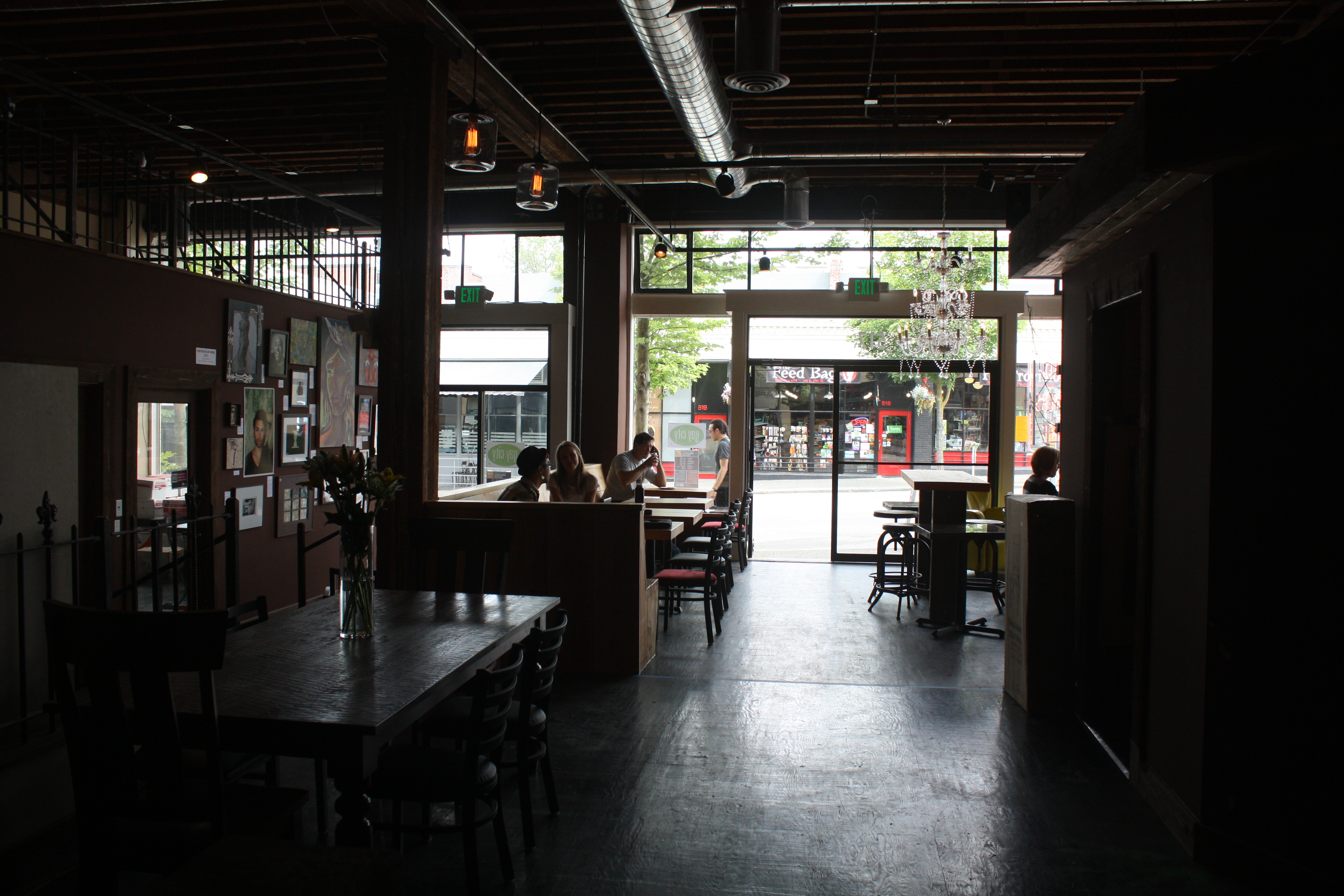 E Pike’s Kaladi Brothers was the first expansion for the small chain beyond its home state of Alaska. CHS has a major soft spot for Kaladi thanks to our use of the cafe as CHS North HQ on occasional summer travels.

Kaladi’s old space, by the way, is undergoing a similar overhaul. Ragen said its future is probably office space but if an all-star restaurateur came along, you never know. 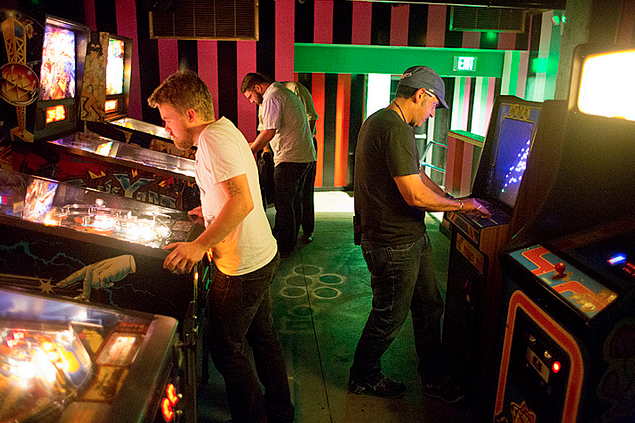 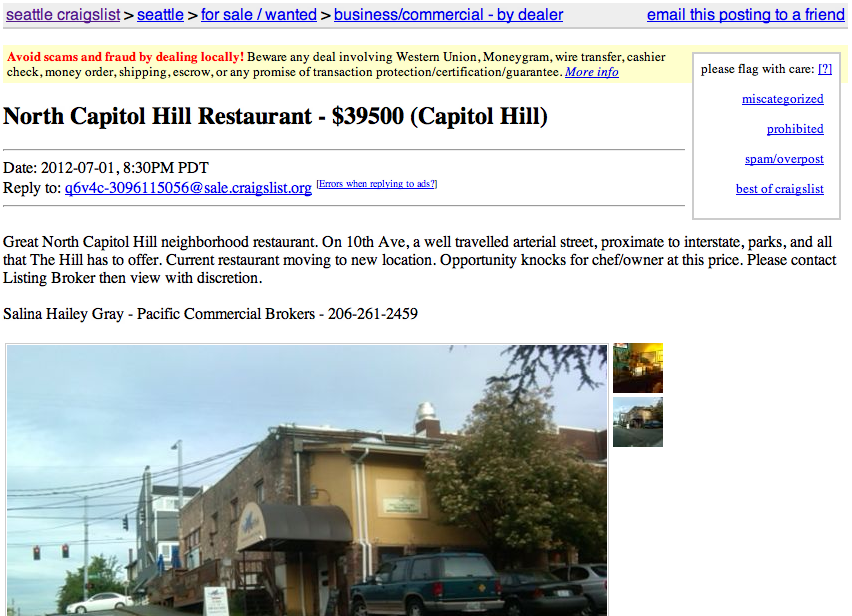 A week before, though, I heard a pesky rumor that the owner hoards all of the tips left for wait staff. I asked my waiter if this were true. He nodded, “Yeah, we don’t really get to keep our tips here.” He assured me that it was all right; I assured him that it was not.

“I envisioned a small, quiet neighborhood bakery. I didn’t expect customers to come from all over the city, loading up [on pastries].”
Yeah, so did we. I think C&F needs to start checking IDs for 98102 addresses before allowing more than one croissant per person. Or just save one for me each morning.

In other linked news, there are some great parodies of Anton Ego going on this week!

The ad says “current restaurant moving to new location” so if that is true, their dream is not dying, just relocating.

“Yeah, we don’t really get to keep our tips here.” He assured me that it was all right; I assured him that it was not….

Why does the above not surprise me? It’s about what I would expect from Thomas Street Bistro. Pathetic– just like the food and the dining experience. The only thing that surprises me is that they’re not gone yet.

I’ve tried several times, in the late morning as I recall, to patronize this bakery….but they are always sold out. I’m not sure I will try again, in spite of the rave reviews. Either they need to increase their production, or they will lose customers like me permanently. There are other places where one can get an excellent croissant, such as Boulangerie in Wallingford.

Regarding the restaurant that is closing on north Capitol Hill…I simply don’t understand why people keep putting their restaurant dream in that location. There has been a series of places there over the years and all have failed. Do possible owners not do some research first to find that the location is never going to work as a restaurant?

C&F is in the 98122, so you out of town 02 people will have to apply for an exception. (kidding. mostly. but i really love the coffee chewies, and really hate getting up early, so only mostly.)

I grew up in Anchorage so Kaladi Brothers has a special place in my heart. Their new location looks great! Can’t wait to hang out there.

Hurray for Gay City and Kaladi, for they are both fabulous and deserve the best. Boo for the crepe place. I would never patronize an establishment that steals its servers’ tips. Shame on them.