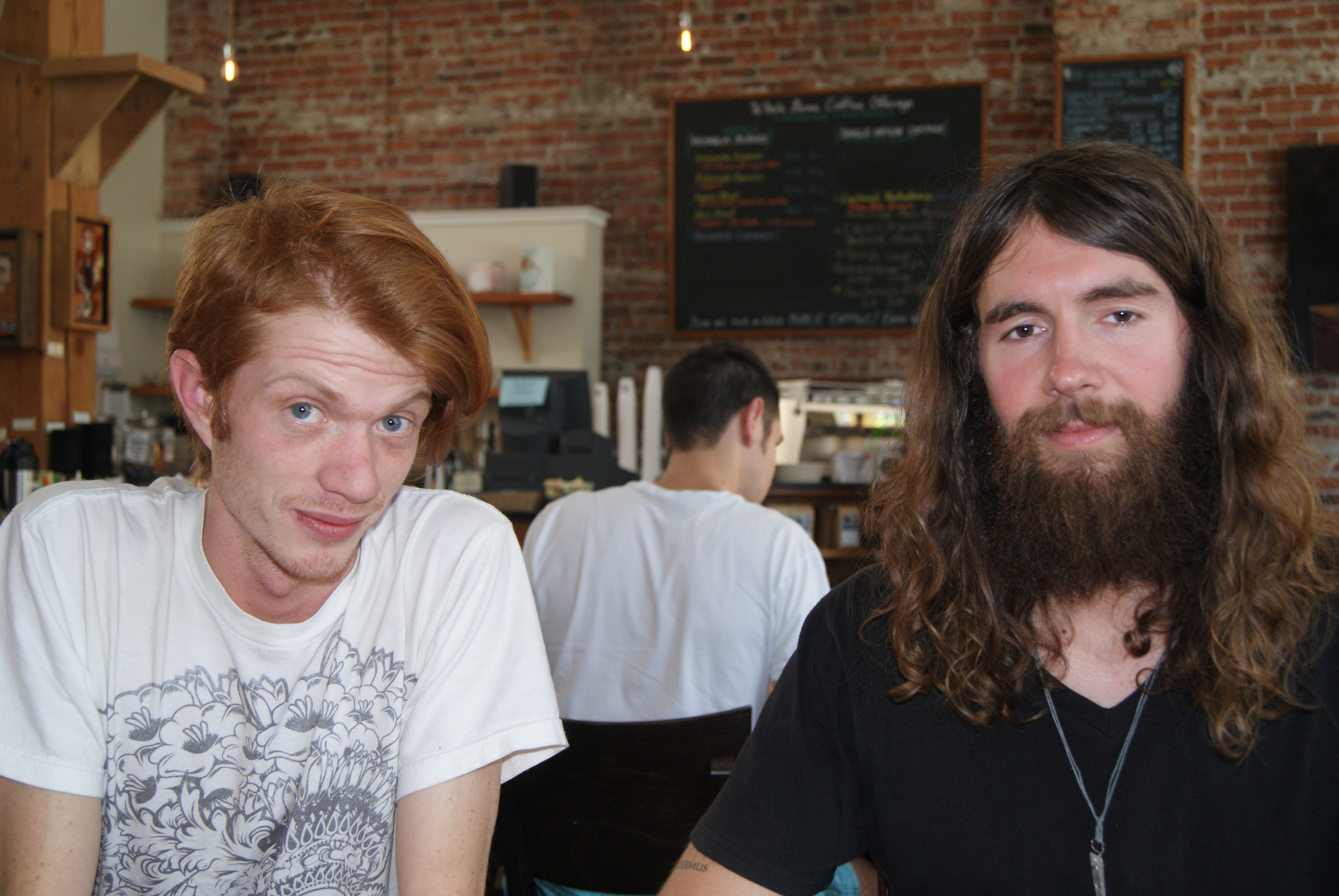 Scott Davis and Stephen Hrivnak would love your cooperation in their co-op (Image: CHS)

Capitol Hill will soon play host to another coffee shop. However, this one’s a little different: Black Coffee Cooperative is looking to create one of the neighborhood’s first horizontally structured coffee shop.

“I used to want to start my own coffee shop as a business owner,” said Scott Davis, a local barista from Trabant Coffee who has worked in the coffee business for six or so years. The idea for Black Coffee Cooperative came to Davis after he started looking into creating his own business. “When I learned what it means to start a business, I realized I didn’t want that — I wanted that social aspect and work aspect that you don’t get when you’re just a boss to somebody. I didn’t just want to lord over people. I don’t like the inherent hierarchy in owning a business.”

The shop will function like other worker owned co-ops — ownership will be split between the four or five main employees who will make decisions collectively on how the shop is run, hours, and wages. The space on 617 E. Pike St is being designed to function as an infoshop and DIY library as well.

“It’ll feature lots of how-to books, neat little gardening books, all things geared towards freeing yourself from the system,” said Stephen Hrivnak. Hrivnak is a barista at Arabica Lounge and was one of the first to respond to Davis’ call for co-owners.

“I was working at Arabica Lounge and saw a flier Scott put up about it. I was like ‘of course I’d rather work for myself than a boss,'” said Hrivnak.

The Cooperative will be brewing Kuma Coffee, an 80 percent direct trade Seattle based roast. They will be preparing pastries from wholesalers like Wayward and Hillside Quickies, as well as serving other eatables. The decision on whether or not to go full-vegan or part-vegan with the cuisine has yet to be reached.

Brandon Hynes, a local musician, jumped in on the idea being a co-owner with Davis and Hrivnak after hearing the plans. The three have been busy at work getting the space ready for the shop opening. The trio have yet to sign the lease on the space that used to house Kiss the Sky cafe — however the space has been taken off the market and a lease is currently being drafted for the upstart coffee shop, so the trio feel comfortable calling the space theirs.

“At this point we are just waiting for the lease to get drawn up. The plan is to open our doors a month after we sign the lease, which will hopefully be soon,” said Davis, who has already begun loading in espresso machines and equipment.

The Cooperative will share a space with a tobacco shop that also used operate in the same space as Kiss the Sky. The trio are planning on building a partition to help define the separate spaces better.

Part of the process of opening a cooperative coffee shop is, inevitably, getting the community in on it. This Sunday, Black Coffee Cooperative will be opening their doors for what they are calling a community “open house.”

“We are inviting people into the space to ask for their ideas. We really want to engage the broader community and open things up to them,” Davis said.

According to Davis, community members can look for three things from the meeting:

“There’s huge room for volunteerism too,” David said, “people coming to help paint or put things together at work parties, people who want to schedule events hosted at the space, honestly anything is welcome.”

The trio is looking for at least one more person interesting in going in on the shop, capping it off at five or six co-owners max for now, with room for part time workers.

“Right now it’s all males, which I think is limiting. We’re looking for a female with good organizational organizing skills who’s interested in jumping on board. We want a diverse representation, and I think having that female energy is really important,” said Hrivnak.

Davis and Hrivnak have one thing they want to make especially clear to the community.

“We’re not interested in only hiring or serving anarchists — we don’t claim to represent anarchy. It just makes sense to allude to it with our structure,” Davis said. While each co-owner of the space considers themselves an anarchist, they aren’t looking to force their views.

“What we really want is to set an example for people by saying ‘look, workers can run their own spaces’ and starting that conversation,” said Hrivnak. “There are many young people in Seattle who probably would love to not be working for a boss. We hope to spark more co-ops to open by showing people it’s possible. It would be beautiful to see others trying out horizontal models across the city.”

I think that area needs a place that pulls great espresso shots. It feels awkward not being satisfied with all the other espresso options, but there it is. Go for it!

The idea of cooperatives is always very intriguing. Making it work and defining members can be more difficult. Would this be a pure workers cooperative, a retail type cooperative, or volunteer non-profit (Usually you need a mission.). In some cases all members have to volunteer for a certain number of hours and/or pay dues for a membership. Then as a group they elect a board of directors. Many have issues of stability if management is also volunteer. Who makes business decisions?

I like how they’re backpedaling the “(A)” symbolism already, when it was being stridently defended a few weeks ago. Apparently the actual feelings of those of us that must live among our local versions of “anarchists” has finally started to sink in.

News flash to wanna be protesters: A whole lot of us that have lived here longer are just tired of your antics and violent tendencies. We are the 99% just like you are — but you assault our space with your protests, which seem to never end these days. Occupy raised awareness, then you took that awareness and smashed a lot of windows at banks with it, blocked traffic with it, and made our home neighborhood a less hospitable place with it. In the process probably alienated more than you inspired.

I am somewhat confused here. They talk about ownership being split between a few “main employees.” Doesn’t sound like a co-operative if they have a division between the “owners” and any “staff.” It sounds especially exploitive if this clique of owners is profiting off of “volunteer” service.

love it, taking the antagonism out of anarchy. i’ve been really looking for a place that would accept me calling my self an anarchist while living a life rich with compromises, some anarchists can be so ruff. i can’t wait to walk into an anarchist space(i know i know its just alluding to be one) that accepts me and calls me a comrade after i give them some money… for coffee… black coffee! <--(wiiit-tay) (This gets me thinking, why would these guys call themselves anarchists and start a business?) Maybe, an anarchist world isn’t possible(probably not the abolition of money either)… but maybe we can spark more co-ops to open… start a co-op metropolis. (co-op metrop-, for short!) Sow the seeds for co-op metrop’s! no future? …yea right. we got the co-op metrop future. on lock.
specially dug this part…
“Right now it’s all males, which I think is limiting. …I think having that female energy is really important” — dats cool bro (fist pump!) my gf needs a job, she’s got a degree in social work and hella on top of that equal rights shit… she down, you know what i mean.

You seem to be confusing ideology with the actions of a few people.

I’m sure they began to realize that catering only to anarchists would not be a sustainable business model. First of all, there are not that many of them (but, at the same time, too many!). Second, they have no money.

But they will not be able to shake the “A” label, and that “movement” has alienated so many people that it will work against them in trying to make their business viable.

If I don’t like your coffee, is it OK if I smash your windows?

“I like how they’re backpedaling”
“I’m sure they began to realize that catering only to anarchists would not be a sustainable business model.”

We’re not backpedaling whatsoever – we’ve understood our own intentions the whole time. We have always planned on being open to all. We never planned on only serving or catering to anarchists, but somehow this was misconstrued by some readers of the last CHS blog post. Anyone who attended the open house last night would be able to tell that we not establishing this business in order to be exclusive.

The cooperative will always be primarily full-time worker owners that take part in a collective, consensus decision making process. In order to also have some flexibility in terms of involvement, and to have a stepping stone to becoming a full worker owner, Black Coffee will leave room for some part time positions. Folks in these part time positions will retain a large amount of decision making power, including a consensus block on most decisions, but some decisions such as dissolving the coop will be reserved for the worker-owners.

JESUS!!! You are so dumb! Quit buying into the media portrayal of anarchists and think before you type.

Just to be clear, not all anarchists smash things. Not only that, but not all people who smash things are anarchists. Most importantly, when things do get smashed it isn’t because someone didn’t like the products or service of an establishment. It generally has to do with the way said business exploits humans and the planet.

no i’m into it– just introducing (a)news troll stylez to this blog. (opportunity comes ones in a life time, so lose you self to the music, sorta thing)

My bad. Will fix that. Apologies!

i’ve been a small biz owner for 11 years. you said you don’t want to “lord over people”, and you don’t like the “inherent hierarchy”.

my experiences don’t really line up with either of those statements. as a matter of fact, it’s pretty much the opposite. my employees make about the same money as i do. i take out the garbage. i clean the kitchen. and when things go wrong, i’m left alone to clean it up.

a couple of thoughts about the committee that makes biz decisions. 1) they tend to make average, watered-down decisions. 2) some members are inevitably more influential and there is a power balance. 3) you are married to these people, more so than your spouse. you better love them because bad business partners are (**trust me**) worse than a bad partner. you can break up with a bad partner.

having said all of those things. i wish you the very best of luck! but money still rules. skimp on EVERY SINGLE THING you can get away with. buy things used, cheap, make them your own.

despite your anarchist ways, cash still rules. everything. around me. and you.

Bananafruit: I think that whether or not a business is “exploiting humans and the planet” is very subjective and usually open to debate. I suppose you could say that ALL businesses are exploitative, because they usually are profit-driven.

The main thing that bothers me about some anarchists is that they think they can define for the rest of us what is an acceptable business and what is not. It’s very arrogant.