Charming, desired by many, and ubiquitous in the Pacific Northwest, the Craftsman bungalow is the quintessential Seattle home typology, yet its origins have a decidedly more contrarian nature than one would think given its pleasant demeanor. Granted, one’s attraction to any given building is typically founded on whether one finds its appearance pleasing, its utility supportive for its prescribed tasks, and it‘s construction and craft sufficiently robust – qualities that the Craftsman succeeds at with verve.  The bungalow is also noteworthy in that it is also one of our region’s best representations of the ever-present, larger cultural forces shaping our built environment. These forces bear themselves out once one looks beyond the Craftsman’s ‘Northwest regional’ charms and compares it to the buildings it resolutely, if politely, stands in contrast to. As usual, our very own Capitol Hill provides among the best venues in Seattle to ponder the inherent contradictions of charming versus agitating exemplified by this building type. 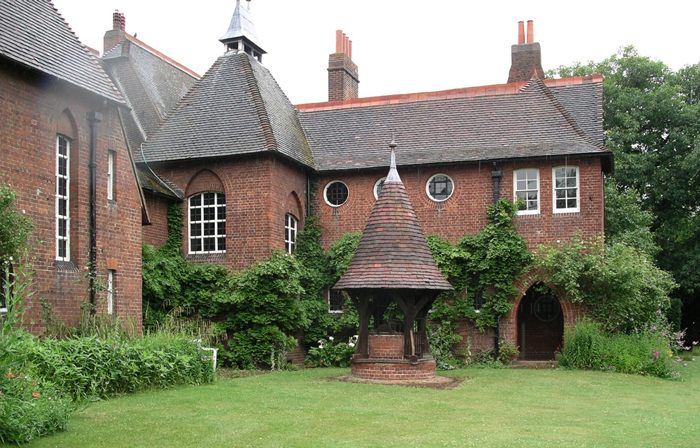 Tracing it roots to the English Arts and Crafts movement of the 19th century and to such seminal works as the Red House by Morris and Webb (just outside of London), Arts and Crafts design and its progeny in the United States marked a massive shift in design theory that ultimately gave birth to modernism, albeit along a rather circuitous path few would have predicted. The designers of the Red House and other notable British architects of the time chose to reject the prevalent pedagogical reverence for classical antiquity with its emphasis on “universal” tenets of beauty, symmetry, balance, and proportion.  Instead they chose to organize spaces based upon use as well as on local cultural and construction traditions. This focus on the local, instead of the universal, led to buildings that looked less as if their origins were in ancient Greece and Rome, and more as though they were the stuff of local traditions and craft. While such vernacular building has existed for time immemorial, up until the Arts and Crafts movement, it had rarely (if ever) been embraced by either European or the nascent American architectural profession, whose pedagogy was founded upon classical traditions. By embracing the vernacular, many architects took a rather bold leap by acknowledging that non-professional/non-academic precedents actually had valid contributions to make.

The architects of the Arts and Crafts Movement shifted so-called good taste – and the taste of their clientele – towards the design of structures based upon the everyday, the serendipitous, and the utilitarian. To design based upon function was also, ironically, to become an underpinning of modernist design. The irony of the shared heritage is, of course, that modernism eventually fell into the trap of classical architecture – a desire to transcend national or cultural boundaries and create a universal architecture. End results aside, the premises of both the Arts and Crafts were provocative, even if the end results were at odds stylistically. 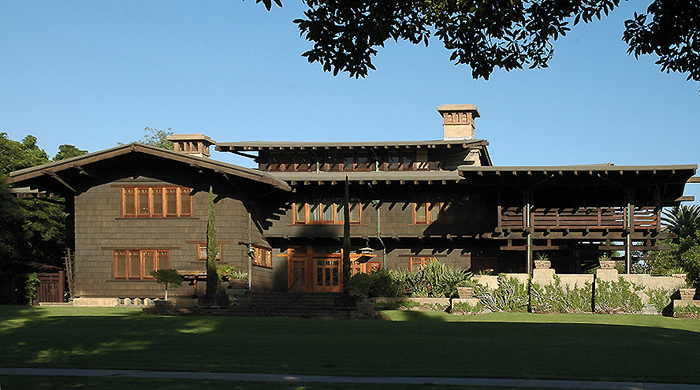 In the United States, the influence of the Arts and Crafts Movement trended to greater influence the farther one headed west. This makes a great deal of sense, as farther west the ties to European cultural traditions wane, and those of a more uniquely “American “ form take prominence. It’s a combination of geography over time. There is perhaps no better expression of the Arts and Crafts in the West than in the hyper-craftsman, American masterpiece by Greene and Greene — the Gamble House, in Pasadena, California. Built in 1908-09 and a National Historic Landmark, the Gamble House exhibits many of the key features of the craftsman bungalow, the West Coast version of Arts and Crafts buildings., the In designing a home that emphasized the fine hand carpentry of Japanese ornamentation and building forms rather than the work of the mason, the Greene brothers created one of the truly great American buildings of the 20th Century.  It was a far cry from East Coast, Euro-centric establishment architecture. This emphasis on a fine carpentry and an exotic (Japanese-influenced) design approach had far reaching effects in the western states, especially in the Pacific Northwest where the traditional use and great availability of softwood lumber made the execution of Gamble House-inspired designs a natural progression of the Art and Crafts approach. Additionally, the long overhangs of the Gamble House proved to be welled suited as a precedent for providing sound weather protection in our soggy, maritime climate. 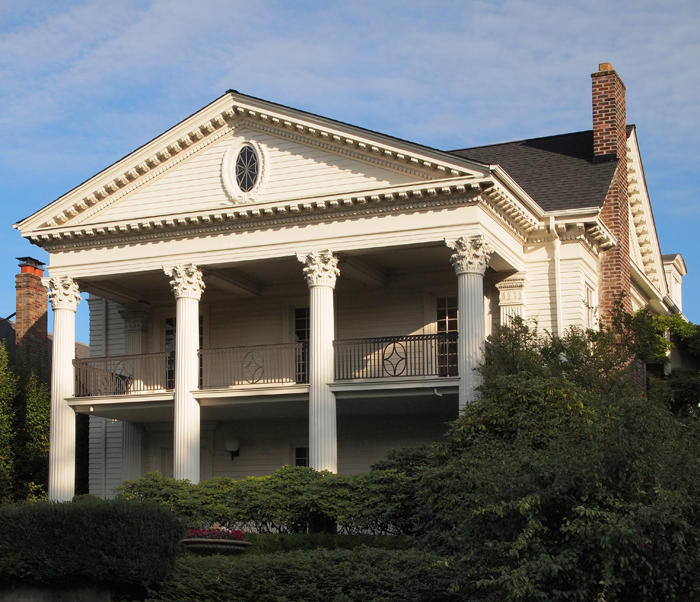 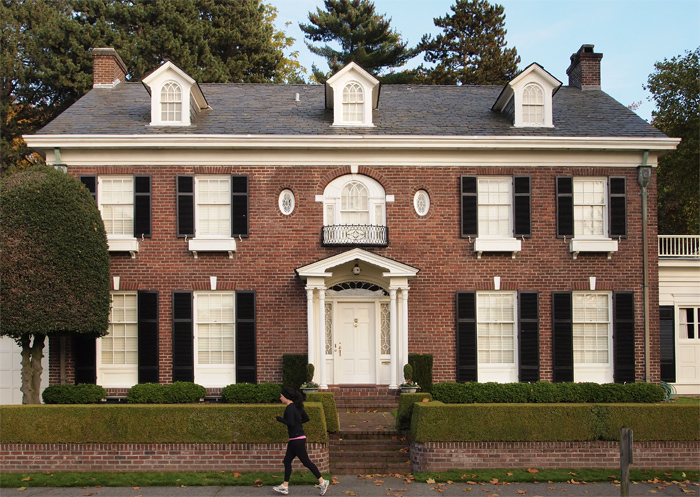 A bit closer to home, in the environs of Volunteer Park, sits a splendid array of these opposing design ideologies – providing an interesting laboratory of East (Coast) verses West (Coast), as it were. Pictured above, are a pair of photos of classically/traditionally inspired homes. Corinthian columns, dentils, the reddest of brick, all the details abound, but I would argue they are bit out of place in the Pacific Northwest. In Boston, Richmond, or Charleston homes such as this are the norm, and speak to that coast’s cultural heritage and proximate influences. More indicative of our region are the two homes pictured below. The top one is a fairly representative bungalow, and lacks the symmetry, clear massing, and classical details of the two former homes. In their place are rafter tails, large overhangs, and details based in the tradition of carpentry, not masonry. The lower example, while not as strictly “craftsman” as the other and hardly humble, was most certainly designed by an architect and follows the new professional traditions then blazed by the Greenes. 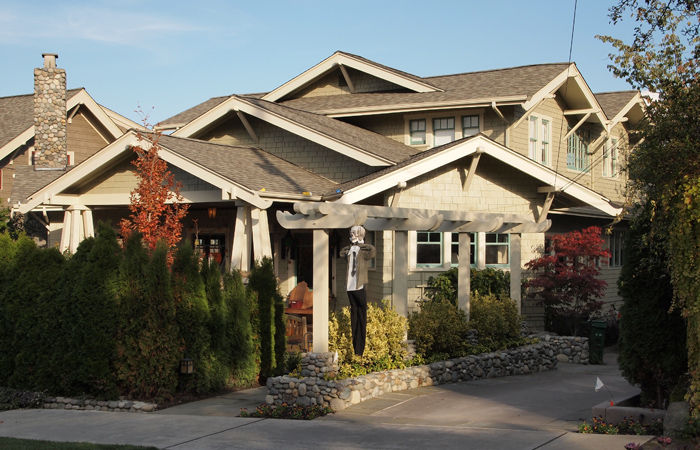 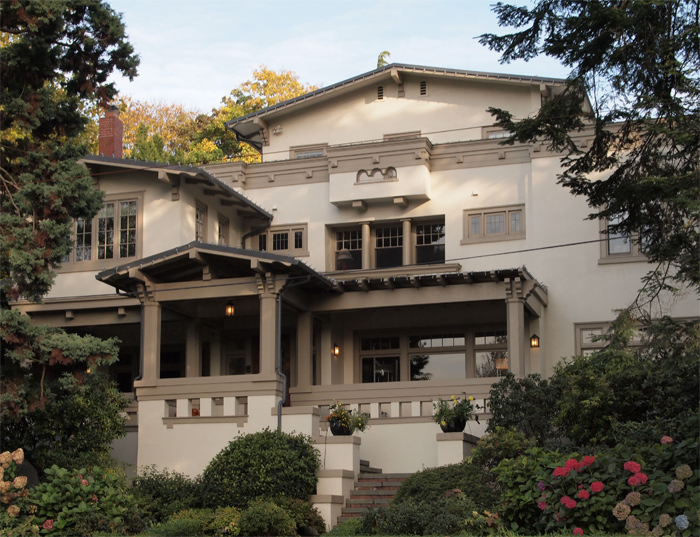 The Arts and Crafts tradition influenced more than the Craftsman type. Its progeny includes Tudor-influenced structures such as the Red House, some of which are also be found on Capitol Hill. Those structures, however, are not based upon the local materials and traditions, and for that reason are not grounded in our region as is the beloved Craftsman — as subversive in its disposition as the city that has made it a favorite.

In English next time.

I tend to think of Craftsman bungalows being smaller scale than the Gamble House, so this was interesting to learn about. “Soft” wood? (fir, fir, and more fir) as opposed to what? From the inside, the craftsman houses certainly exhibit lovely subversive elements by carpenters: oh, those wonderful built-ins!

This article was unnecessarily discursive and pedantic. Moreover, it was just plain stupid.

Sounds like we are being warmed up to the idea of tearing down these grand, old mansions?  Too bad modernism never leaves one with any sense of awe, only a sense of awful.

It’s like people have never seen the Schemata posts before. It tends to be fairly technical, but it’s not news in the sense that most of the posts on CHS blog are. As such, it’s not for everyone, but you don’t have to put down the author just because it doesn’t appeal to you.

Keep it up Josh, I always enjoy learning more about architecture and design, and the connection to our neighborhood is a great touch.

I agree – hello people, it’s an article about architecture. They appear every once in a while on CHS. They’re about houses and buildings. They’re full of terms that you may not have heard of before, but that’s OK… isn’t it fun to learn new words and concepts sometimes?

Thanks for the interesting post. I look forward to the next one.

Thanks for the support. And it’s John — not Josh — he writes for Crosscut. And maybe at an easier reading level, but most likely not.

I am familiar with architectural nomenclature and thought this article was poor. For one, the title should have something to do with the article. You talk about Craftsman homes and then show colonials, etc. There’s a time and place for pointlessly pedantic articles: your dissertation. Spare me. I was hoping for something historically relevant and revealin, given your title.

Any chance you could do an article on this particular, apparently local style? I recently visited Seattle for a couple of weeks and stayed at a rental propery you profiled – the Harrison Modern, and fell in love with this design when walking in the Stevens neighborhood adjacent to Volunteer Park. I have a lifelong fondness for the Craftsman style and was tickled to find a Seattle version and would love if you could perhaps delve into it.

Thanks! Love the blog – Capital Hill goings on combined with architecture? Perfect! I’ve been home a month (east coast) and I’m still reading along. Keep up the great work!

What, no mention to the Sears brand that gave Craftsman homes their name? Just as people hate cheaply built aPodments now and say they’ll never last, 50’s homes had the same criticism, and 1910’s-1930’s Craftsman homes were literally ordered from a Sears catalog.