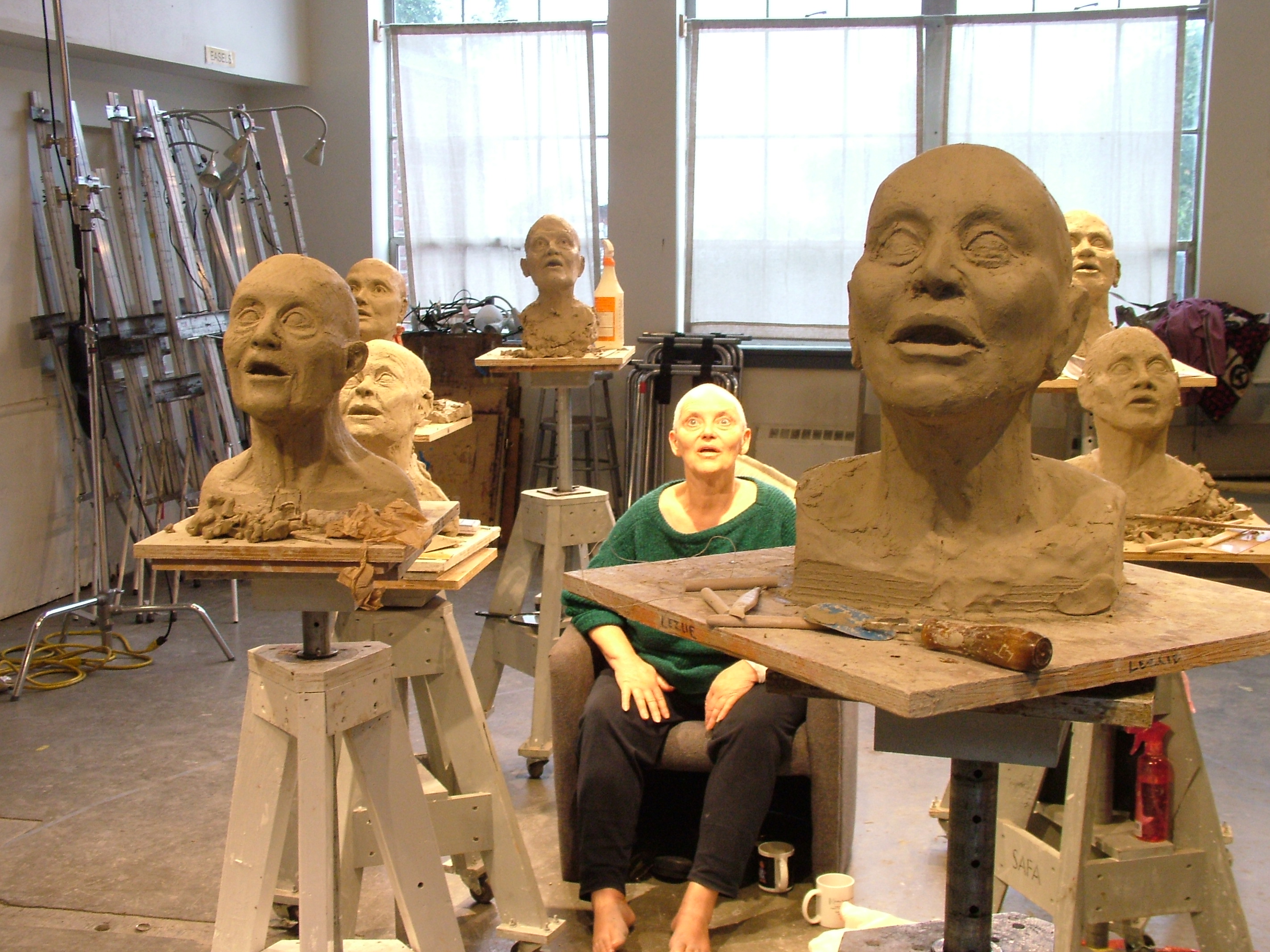 Here’s the latest from the streets of the East Precinct. Have a tale of law and order we should know about? Let us know.

Our best guess is that someone (with what would have to have been a big truck) broke in (or had a key) to our building in the dead of night last week and cleaned us out of a whole studio’s worth of sculpting equipment! We have reported this to the police, of course, but I am amazed at this brazen theft, and have not been able to find any mention of the stands on CraigsList, or any school, program, or artist in the area who is currently running a sculpting program of this size.  Weird, huh?

I am very happy to tell you that 2 local sculptors – Gage teaching artists Mike Magrath and Matt Buckner – arrived over this past weekend with replacement sculpting equipment from their personal collections.  Their generosity made it possible for our weekend workshop (featuring guest artists who had flown in from the Florence Academy in Italy) to continue as planned, in spite of this very strange, and very unsettling loss.

We’re also fortunate to have recently received a 2012 Equipment Grant from 4Culture who have agreed to let us substitute our original equipment proposal with a request for replacement stands (with an estimated value of about $4,500).  We greatly appreciate the generosity of 4Culture – but we’d still like to have our original stands back…

I have attached a photo of a model sitting in between some of the stands (a kind of weird pic, I know – but it does show the stands clearly) – again, these were custom made for us, and many still bear the original stenciled school name (Seattle Fine Art Academy).  Frankly, we’re baffled by this theft – these stands are gritty and worn, as you would expect, and would really only be valuable to artists and art students involved in the serious pursuit of creating sculpture.

Any help you could provide in getting the word out to the Seattle art community would be greatly appreciated.  It’s difficult to imagine the motive behind a theft like this, and it weighs heavily on our minds that our students and teaching artists have now been denied access to this much-needed and well-loved equipment.  If you could help us alert Seattle-area artists to this theft, we feel that there is a good chance someone will see them, and they might find their way back home.

Wanted to give you guys a heads up that I found (and then the police arrested) a guy stealing mail from my house today.  He appeared to have a bunch of checks in his possession of different colors so my guess is that I’m not the only person’s mail he grabbed today.  No clue if this is part of a wider problem on the hill–the incident # is XXX if you want to check it out. For us it served as an effective reminder that we should put outgoing mail into post office drop boxes rather than leave in our door slot.

We asked Erin how the alleged bad guy was caught:

I spotted him–he peeked in the front door window and didn’t see me working on a paper at the dining table.  I thought he was the mailman (at first glance at the top of his head he kind of looked like him) until he didn’t drop any mail in the slot (and he had big headphones around his neck which isn’t usually USPS style).  When he grabbed the mail and started to walk away I stopped him on the sidewalk, got the mail back from where he had dropped it on the sidewalk while denying he had it, and a nice passerby called the cops while the guy walked away (my phone was inside).  The cops found him a few blocks away and drove me by to identify him before they arrested him.  They scrambled 5-6 cop cars to look for him as there was nothing else going in this lovely sunny afternoon.  They found him in/near Williams Park across from Safeway.

Police found the suspect nearby and a search revealed a 2.5 inch fixed-blad knife built to be concealed in the man’s belt buckle. He was arrested for investigation of malicious mischief for denting the vehicle and harassment for the weapons threat.

Seriously, if you leave your outgoing mail in your door slot for Mr McFeeley to pick up like its 1950s Mayberry, you deserve to get it stolen. Seattle is no longer the sleepy town it was 30 years ago. This is life in a big city – in a big city, we put our mail in those metal blueboxes, we lock our front doors, we don’t leave our keys in the car ignition, and we don’t wave our cellphones around while drunk on a dark street at 2 am.

Are you sure about that last one? Cuz I could swear there’s a LOT of that going on around here…! :-o

I understand the benefits of the city but many no longer understand the mental currency of living in a place where we DO leave our keys in the ignition, our kids ride bikes to school and we know our mail-person on a personal basis……I wouldn’t trade it for all the designer hotdog stands in the world.

I am really not making this comment as an attack on city life just a comment for thought.

as if life in the city weren’t hard enough we have to deal with this extra mess. men with knives, joker shooters in movie theaters .. as rodney king said so poignantly so long ago, “can’t we all just get along”.