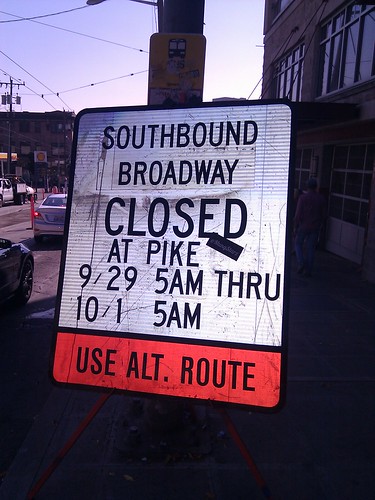 In which we seem to have made a regular Friday morning practice of reducing surely significant events into notices about traffic irritations. You’ve been warned.

Friday afternoon between 3:30 and 5:30, there’ll be a “Funeral March for the Ride Free Area” mourning the end of free bus rides in downtown Seattle. While the marchers will remain on the Third Avenue sidewalks between Westlake Park and the County Courthouse, traffic could, nevertheless, be impacted. About the same time, an unknown number of bicyclists, taking part in the local extension of an international bike blockade called “Super Swarm,” will attempt to hinder traffic as they make their way from Pioneer Square to Westlake Park.

Starts at fourth and Pine and marches on the sidewalk on Pine to Third Avenue, south on Third Avenue to the County Courthouse at James Street, then retraces the march back to Westlake Park.  March could cause disruptions to traffic when participants cross at intersections.

Bicyclists leave Occidental Park in Pioneer Square at 3 pm and travel north to Westlake Mall at 5:30 attempting to create traffic gridlock along the way.

You’ve probably heard about all the Metro service  coming up at the end of the month—the end of the Ride Free Area in downtown Seattle, the start of “pay-on-entry” on all , two new RapidRide lines, and revisions to more than 50  routes.

We’re asking you, our customers, to alter many travel habits, so we want you to know why.

We’re revising service to make the best use of Metro’s resources—the public’s tax and fare dollars—to get more people where they want to go.

Giving you the most value for your transit dollar has always been important, and never more so than now. More and more people are riding our  as the economy gets stronger and our region grows. At the same time, Metro continues to face a funding shortfall that threatens our ability to meet the demand.

We’re discontinuing some of our least productive routes and reinvesting the service hours in more heavily used routes to reduce overcrowding and help  arrive on time.

And we’re making many smaller adjustments to improve service speed and reliability.

Many of these  are possible now because Metro has new service guidelines, approved last year by the County Council, that emphasize efficiency and productivity.

As we  service over the next few weeks, there are bound to be a few glitches. We’ll be doing our best to make things go smoothly—and you can help:

Thanks in advance for your patience and support while we make Metro a stronger  system that will serve you better.

Here’s what we had to say about the changes, by the way.

·The intersection of Broadway and Union will be closed, with the exception of one northbound lane, the weekend of September 29thand 30th.

·Broadway will be closed between Madison and Marion from 8:00 p.m. to 6:00 a.m. for up to two weeks beginning September 27th. There will be a signed detour.

Construction of the University of Washington Station pedestrian/bike bridge construction has started. In order to build the bridge the contractor will need to close traffic lanes and sidewalks on Montlake Blvd. (see traffic details below).

Are those cyclists who participate in the “super swarm” trying to be be antagonistic, or are they just clueless? The stated goal was to cause traffice gridlock? My, oh my….talk about a great way to piss off motorists even further!

Seattle has made great strides, and spent alot of money, in catering to cyclists with miles of bike lanes and sharrows, yet some cyclists seem to want even more of….what? Most motorists want to share the road and be considerate of cyclists, but events like this are counterproductive to this kind of cooperation.