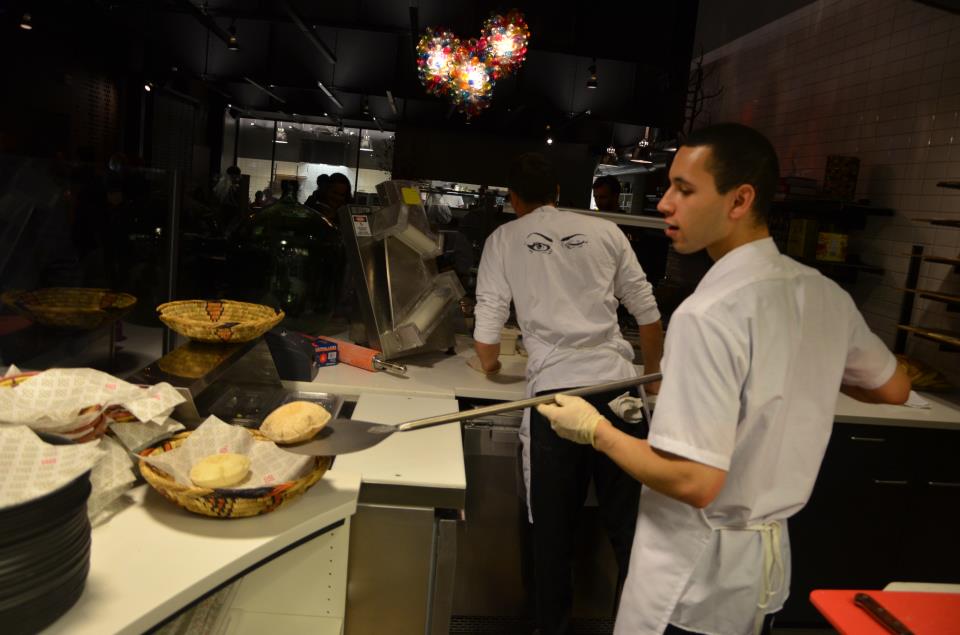 “A modern union of Middle Eastern cuisines” is the pitchline. After a year of planning and a buildout that has transformed an auto-row era building across the street from the bustling Melrose Market, first-time restauranteurs Wassef and Racha Haroun debuted Mamnoon over the Thanksgiving holiday week. We haven’t been in for a visit but Wassef sent over these images from inside the finished project.

The restaurant also wants you to know that its walk-up window is also now ready to serve:

We are excited to announce that starting Tuesday 11 /27, the mamnoon to go window will be open from 11:00 am -10:00 pm offering a great mix of kulage sandwiches, mana’eesh, mezze, salads and juices – you can take out, or eat-in in our beautiful space.

Check out our menu on our brand new website http://www.mamnoonrestaurant.com/.

CHS first reported on the Melrose Square project in spring 2010 and the plans for a renovation of the 1928 automotive garage at 1510 Melrose Ave. The Graham Baba-designed project was planned to include ground floor retail topped by 2,800 square feet of office space and a 1,800 square foot residential component. Eric Cobb of Cobb Architects designed the restaurant component after working with the Harouns on their award-winning Leschi home. 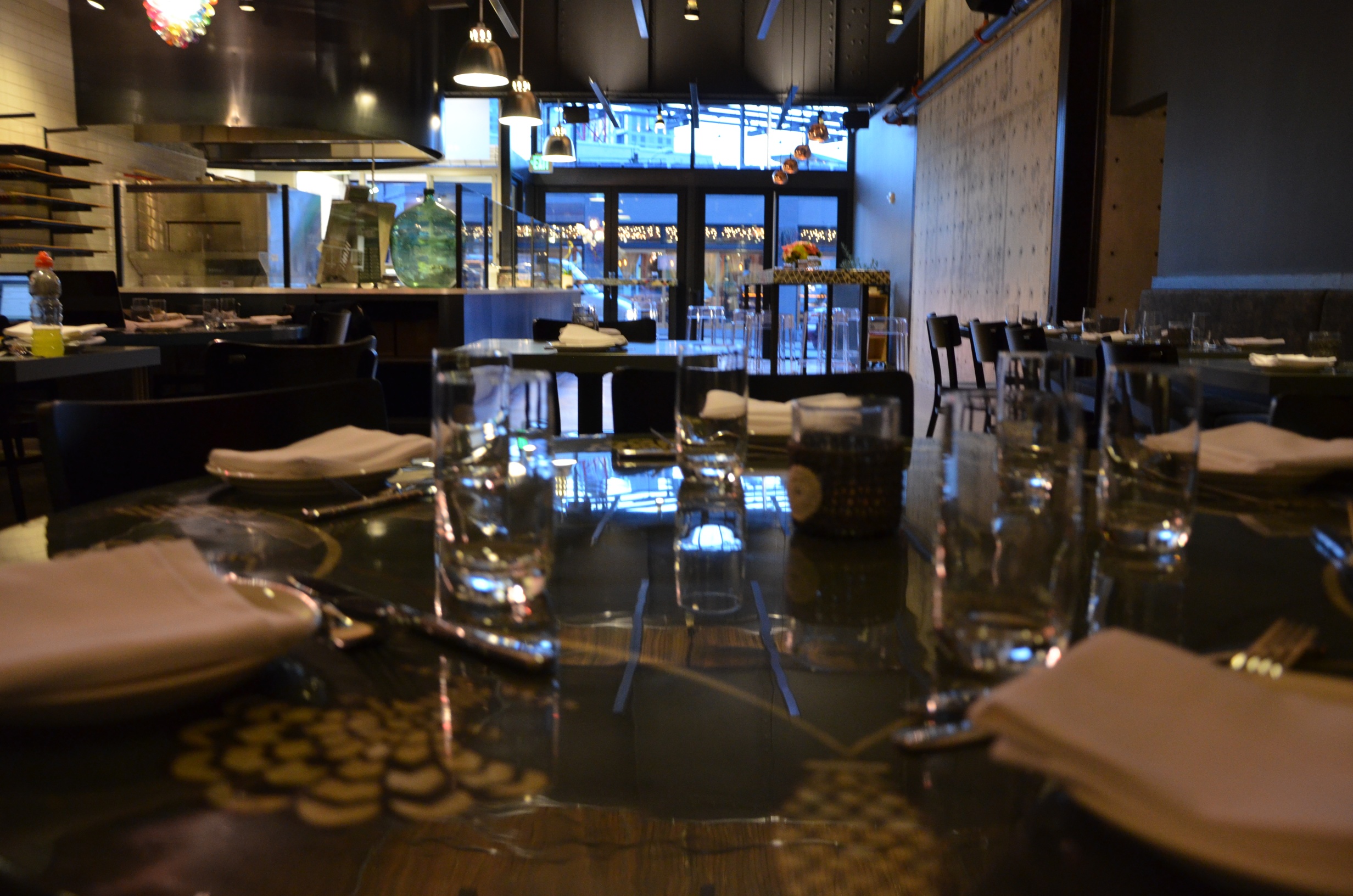 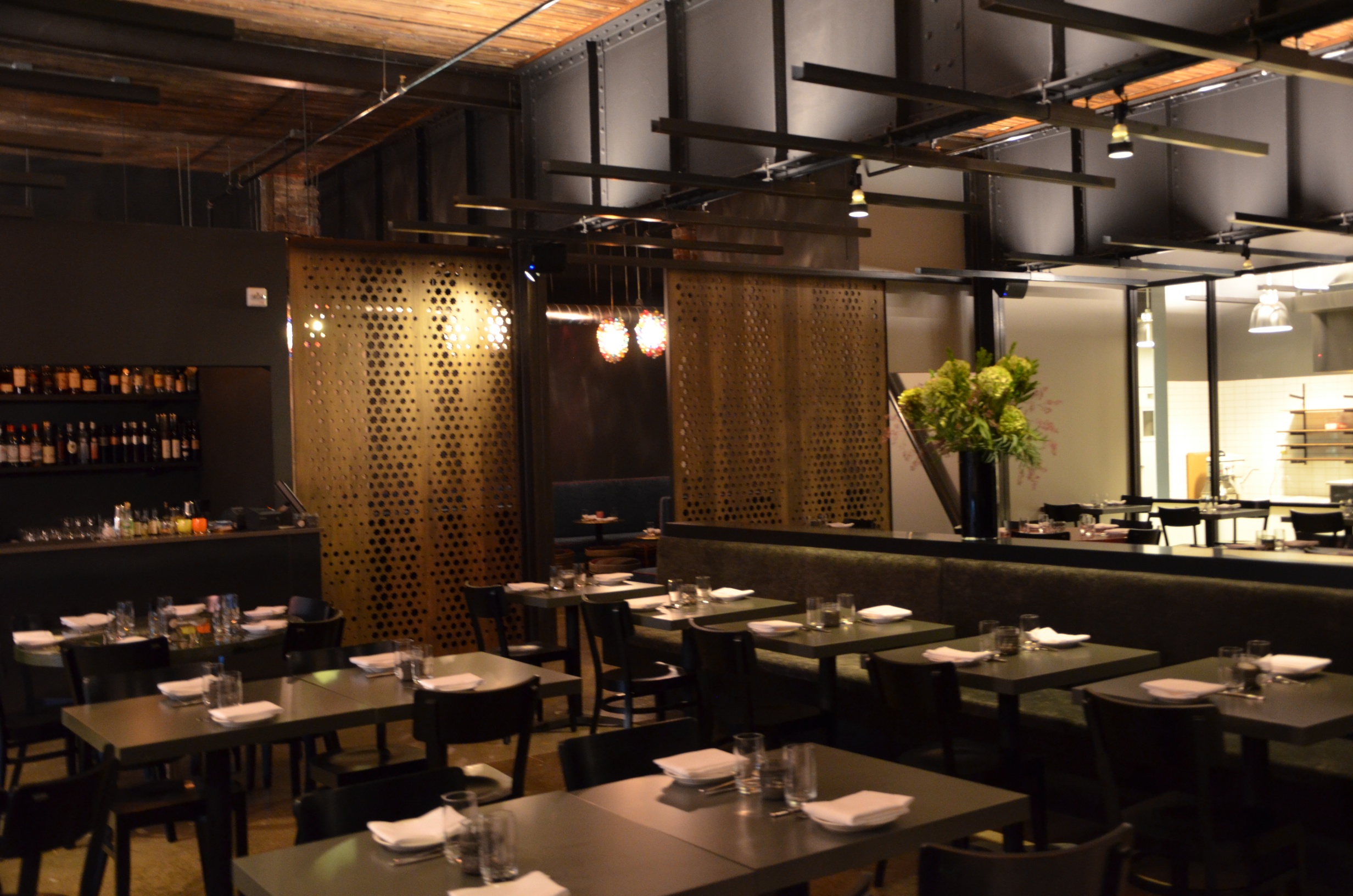 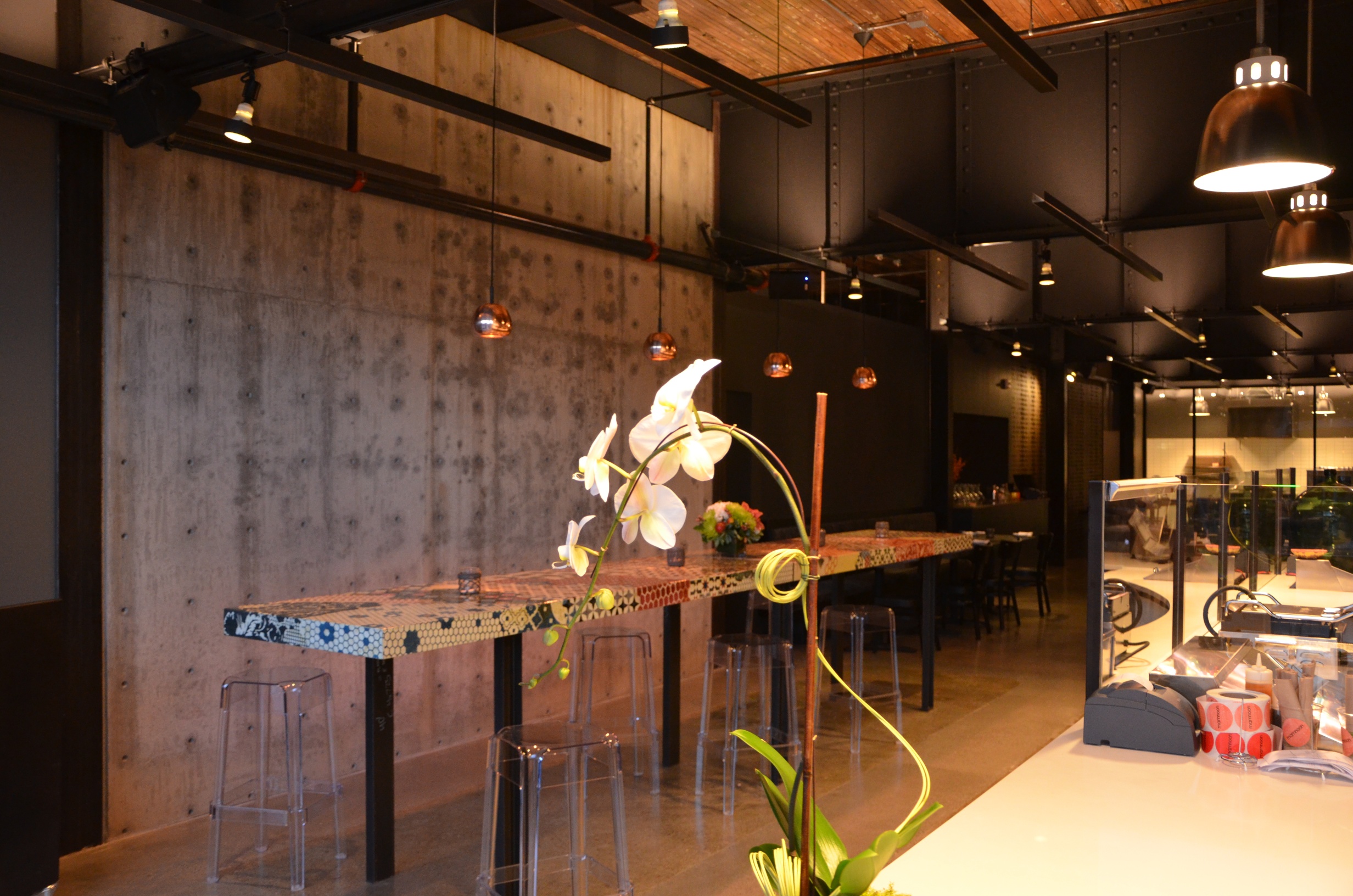 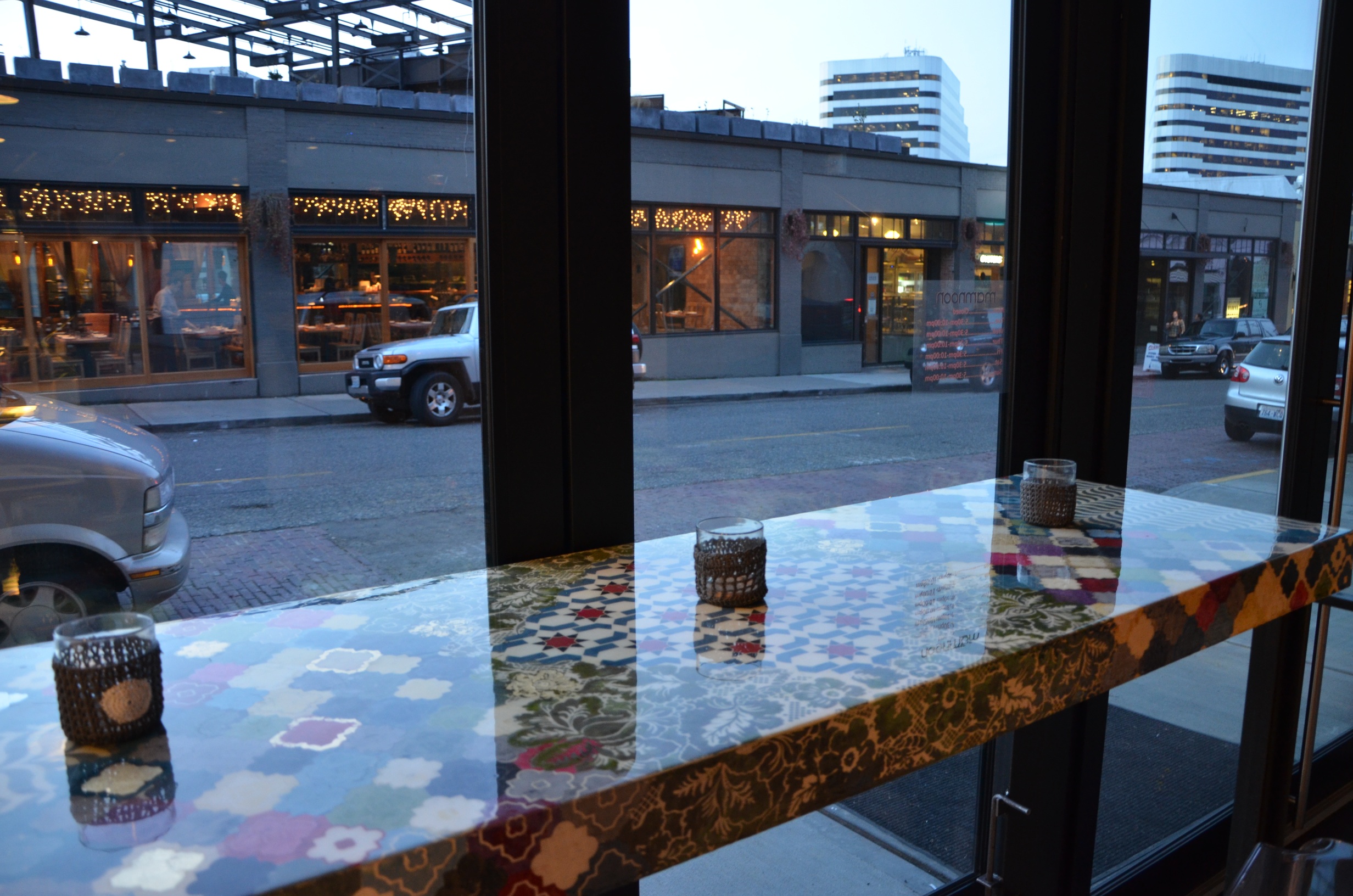 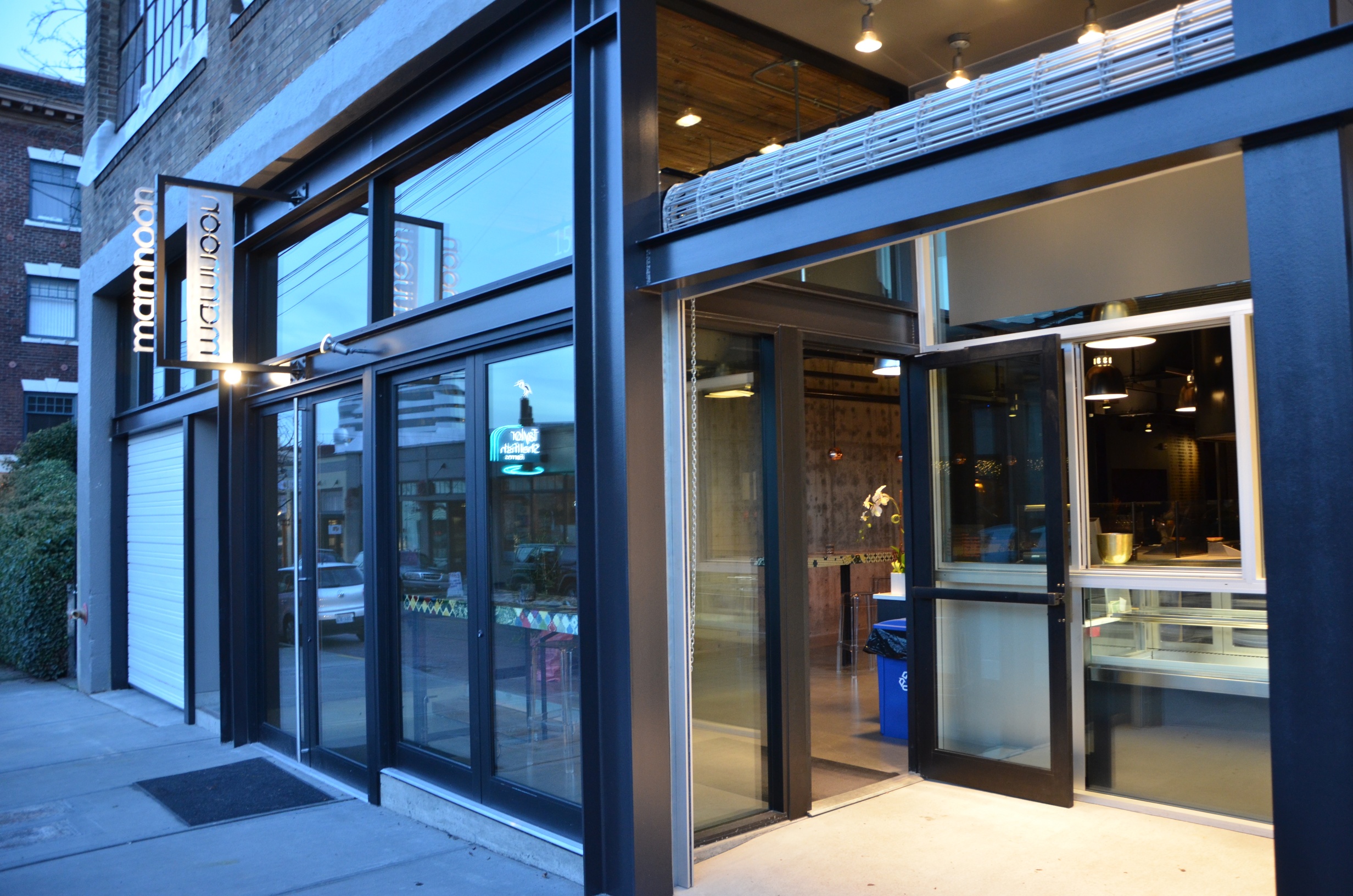 There are three distinct dining areas designed into the restaurant that can be re-configured for the transition from lunch to dinner. A small area near the to-go cubby will provide a spot to sit for diners on the go.

You can check out the menu on the Mamnoon web site. To-go items are comprised of kulage — “griddled sanwiches” — and manoushe — baked bread mixed with toasted thyme and sumac and topped with various items. Dinner items include small plates and entrees of grilled meats and breads. It’s a pretty incredible looking set of offerings.

Writer and Middle Eastern cuisine expert Barbara Massaad was brought on board to advise on Mamnoon’s menu.

Chef Garrett Melkonian runs the kitchen and is in charge of a menu with many offerrings new to Seattle eaters. Melkonian comes to Mamnoon via Tom Douglas Restaurants, Café Juanita and the Inn at Langley and Spring Hill. Seattle cocktail gun for hire Andrew Bohrer advised on offerings ranging from traditional — a surprising affinity for whiskey thanks to British occupation, Haroun said — to the sacred. A menu of non-alcoholic mocktails is on offer.

Wassef is a local tech entrepreneur who serves as chief technology officer in creating Odd Fellows building-headquartered King of the Web.

“Middle Eastern, Lebanese and Syrian — we have 5,000 years of tradition: farm to table,  amazingly healthy,” Haroun told CHS earlier this year. “Mamnoon is about sharing that.”

So excited seeing that menu. Tastes of home on my dad’s side of the family: za’atar, labneh, kibbeh, kefta.
Curious about price point for toGo/lunch/dinner.

We were lucky enough to be at the grand opening. Their first night to welcome and serve absolutely amazing food…. it was amazing and we’ll definitely be back.

My girlfriend and I went earlier today and were pretty excited to go. We both paid $8 for the Falafel and although it was really good (and like to support local/small businesses), we left hungry and a bit disappointed.

If they provided a little side dish alongside of it, for the money we paid, we feel like it would’ve been a lot more worth it, or even lowered the price a bit to add in a side dish…

But we both felt like we could’ve gotten more (for less/better) elsewhere on the hill. I wish them luck and know they’ll figure things out along the way – adapting things as they go.