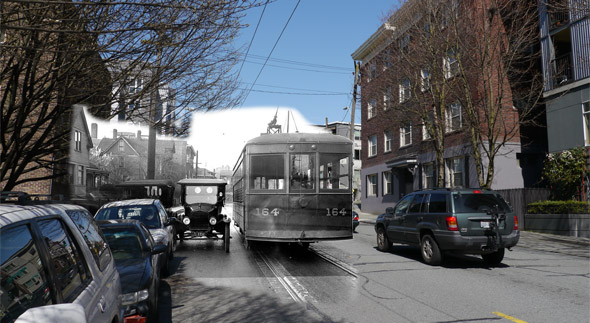 In the finale of the origins of the Summit neighborhood, a new streetcar line turns a few inconvenient houses into a bustling apartment district in 1908.

Quick recap. In the first chapter, we met Bella Weretnikow, a gifted young woman living on the Howell plateau in 1900. In chapter two, she married lawyer LN Rosenbaum and moved to Summit and John in 1906. Chapter three told of the forgotten municipal streetcar plan of 1906, and revealed the origins of the streetcar line on Summit and Bellevue.

No sir, I don’t like it
More than a year before the streetcar election, LN Rosenbaum sent a letter to the Seattle City Council arguing against public ownership. Although he was still a newcomer to Seattle, in this letter he shows strong belief that private enterprise was the way to go:

Agitators of Municipal Ownership fail to appreciate that were it not for the energy and accomplishment of private enterprise this country would be minus the tremendous and plentyful street transportation, gas, electric, and other local facilities.Thus consider that the United States, though under a system of private energy, leads any other country on earth. (CF 28214, Seattle Municipal Archives, 1905)

Even if he had philosophical issues with public ownership, he could still see the opportunity that the streetcar lines create.

Won’t you be my neighbor 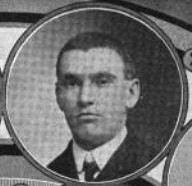 LN and Bella moved to Summit and John on June 19, 1906. Within days, the Seattle Times‘ real estate pages began reporting a cascade of property sales by Rosenbaum Investment Company in the Summit neighborhood.

It would be fun to unravel all of the transactions. One is recounted in the July 15 Times. Rosenbaum and a partner bought the corner of Summit and Mercer — now Summit Foods — from a man named Daniel Pratt For $5000. He sold it “immediately” for $6000 to a man named J. G. Leslie.

Rosenbaum turned into a great source of quotes for the Times. On July 22 he told them that the Summit area would go up in value by 30% within 2 months. He claimed the “opening of Olive Street” would be the catalyst, but he knew more than he was letting on.

Choice and strategic
Finally on August 12th the Times revealed why Rosenbaum was giddy about Summit:

The Summit Avenue district, Mr. Rosenbaum says, is still a choice and strategic point of trading, where values have appreciated 50 percent in the past month, and will yet advance another 100 per cent during August and September. The Municipal Street Railway plans show a car line running directly on Summit Avenue, and the Seattle Electric Company have announced that if the plans for a municipal railway do not mature they will build a car line on Summit Avenue. This insures for Summit Avenue, in one year from today, a greater property valuation than now prevails on Broadway…

Other realtors quickly piled onto Rosenbaum’s discovery. Morris, Crane, and other big names began advertising properties for sale. A neighborhood improvement club formed. And in December 1906, the Seattle Electric Company formally applied for permission to build the Summit Line.

With streetcar access, Rosenbaum saw Summit as the next Broadway. He was right. Looking back, we know that over the next 20 years this area turned into a dense apartment district. Developers also added groceries, restaurants, and other shops.

The property in Summit was flipped more times than a pancake at Glo’s. With the easy money wrung out, LN moved on. He and Bella moved a bit north to the Harvard-Belmont neighborhood. And he began to focus his energy on assembling funds for large projects. 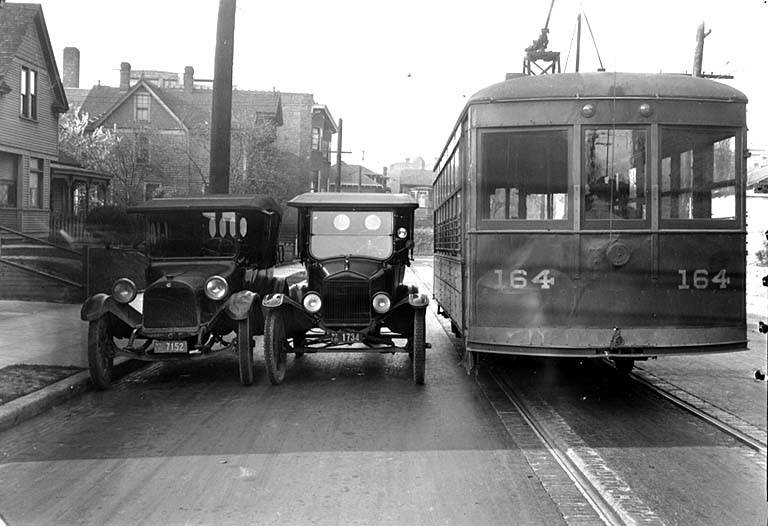 UW’s archivists have correctly guessed the date: 1921. The license plates confirm it. What they’re missing is the location. This is on Bellevue, looking north at Denny Way. Don’t worry, I’ll shoot them an email.

Also, a higher resolution of the blended image is available on Flickr.

Credit
Continued thanks to Bella and LN’s granddaughter Judith Rosenthal. Besides answering questions in correspondence, she shared Bella’s privately published autobiography My Life, and her unpublished biography of LN. Shortly after their 50th anniversary, LN passed away and left Bella alone. At the anniversary of his death she determined to set her memory to paper, leaving a biography of him and an autobiography of herself, the best record we have of either.

And thank you all for indulging me as I explored this trifling story over the last few months.

Did you miss the recap of Re:Take’s first year? Also, here are the last few Re:Takes on CHS:

How can you tell this is Bellevue? Are any of the buildings in the photo left?

Rob, thank you so much. You have added to our understanding of the key role of streetcar transportation in how the Hill came to be a dense apartment district.

Ryan, thank you! This one was tough. There are two buildings left: to the left of the streetcar, above the car, the two houses are still on Bellevue on the west side, north of Denny.

The placement of those buildings is key. Why are they out in the middle of the street? The road must bend or jog.

First I assumed that the “Summit Line” caption was accurate. Then I made sure that the route didn’t change over time — and checked where it ran before Olive Way existed. Then I looked over old maps, in particular the old Baist map on pauldorpat.com, and decided that this was the only place that the street made a bend like that. Then I double checked the locations of buildings on the old maps to the old photo. Finally I traveled to the spot several times taking photos from different locations until I was satisfied. :)