Police have arrested the man suspected of using sex as the bait in a string of robberies including an early January incident in which he allegedly pulled a gun and stole phones, laptops, and wallets from two victims in an E Howell apartment.

David Hansen, 25, was taken into custody by SPD Friday night outside an Aurora motel after “information was received” that the suspect was staying there. Tuesday night, Hansen escaped capture after an arrest attempt in the Central District.

Police say Hansen is a suspect in a November case in which a man reported he met the Hansen for sex but was brutally beaten and robbed. Following the Central District arrest attempt, SPD provided Hansen’s photo and asked for assistance in tracking him down.

Last week, police say another possible Hansen victim came forward after reading about this gunpoint robbery involving a gay sex social networking app. The victim told police he and another man were robbed by person matching Hansen’s description inside their E Howell apartment: 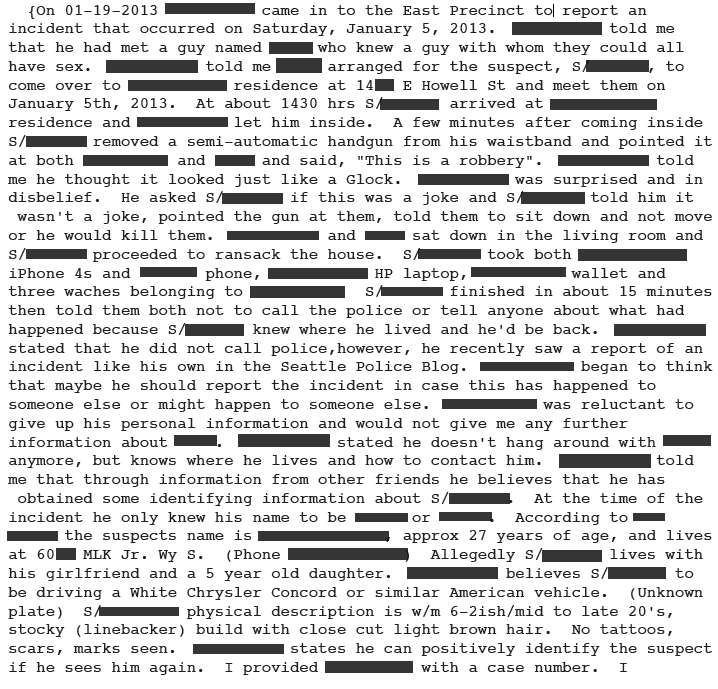 The police officer’s preliminary report on the incident concludes noting that the robber used a fake name during the incident.

According to state records, Hansen was busted in 2009 for 2nd degree escape after he failed to report back to his work release program following convictions for residential burglary. He was sentenced to a year in jail but we don’t have information on how much time he served. A King County Jail record indicates he was arrested earlier this month and spent a day locked up booked on an apparent Department of Corrections violation.

Must be a relief to know it’s safe once again to meet up with guys off GRINDR, SCRUFF, GROWLER, ADAM4ADAM, et al for quickie anonymous sex. I mean what risk is there in that?

thanks, spd, for getting this dude away from the public. violently beating and robbing someone is still unacceptable behavior, regardless of what kind of sex you’re into.

I am in complete disgust with the person who posted this with SO much information, like a few numbers blacked out here or there is going to keep the victims safe from retaliation.

While you’re being 100% offended, you might want to keep in mind–the suspect will have complete access to the police report anyway when whenever attorney he gets appointed for him does his defense.

As the person who gave the report to the police, I can assure that Grindr, Scruff and Craigslist were not involved. Doesn’t matter. After going through an incredbily tough ordeal and making the decision to report all the pertinent details to the police, I feel like a victim all over again. Get off your high horse. This could happen to each and every one of you much easier than you might think. This guy was an equal opportunity offender. Including the police report with a few lines blacked out isn’t news… it’s laziness. And irresponsible. AND DISGUSTING. Thanks for using this whole nightmare to kick me while I’m down. At least that bastard is off the street. Screw the rest.

Redstate, as I discussed when I returned your call about this, I’m not removing the publicly available information from the site. I prefer to include narratives from SPD in these situations when I can. Yes, it’s fast. But it’s also more accurate than the half-baked re-writes I see TV stations and other media outlets attempt. As I said, the information about how the incident was provided to police is pertinent and helps people understand what is known about what happened. I don’t like boogeymen — the more we know more about bad situations and how they happened, the better.

I’m sorry this happened to you and I hope justice is quickly served to the man responsible.

Redstate, stop beating yourself up so much about it, and be proud that your tips got him caught. If it weren’t for you he’d still be out there doing it. Give yourself a break– nobody on here knows who you are anyway, unless you tell them. Speaking for myself anyway, thank you for making it safer for me and everyone else in our neighborhood.

It’s great that this amoral thug was arrested. The bad news is that there seems to be an endless number of other criminals out there to victimize and terrorize our community.