UPDATE — 7:35 PM: In a 5-5 tie vote, the Seattle Landmarks Preservation Board voted Wednesday night that the Melrose Building at Melrose and Pine should not move forward in the nomination process. Meanwhile, the neighboring Pinevue Apartments building will go to the next stage in the process.

“It is remarkably intact but it doesn’t rise to the standard of landmark,” one board member argued in declining to support the Melrose Building’s nomination.

Meanwhile, the board expressed interest in taking a closer look at the Pinevue building including its “really unusual features” and mostly unmodified early 20th century mixed-use-style architecture.

The juxtaposition of the two decisions reveals an interest from the board in the Pinevue as a clear example of a specific building type — in this case, an early mixed-use apartment building — versus what it described as a more mercantile and miscellaneous form for the single-story Melrose. The board also expressed appreciation for many of the unique design elements and craft of the Pinevue. But to perhaps foreshadow what is next for the landmarks process for the old building, there were already grumblings about the loss of a cornice from the Pinevue structure midway through its life that could help nudge it toward disqualification as the nomination process continues. CHS examined the architectural qualities of the Pinevue building — also known as the Timken Roller Bearing building for a longtime tenant of the space — here in 2012. 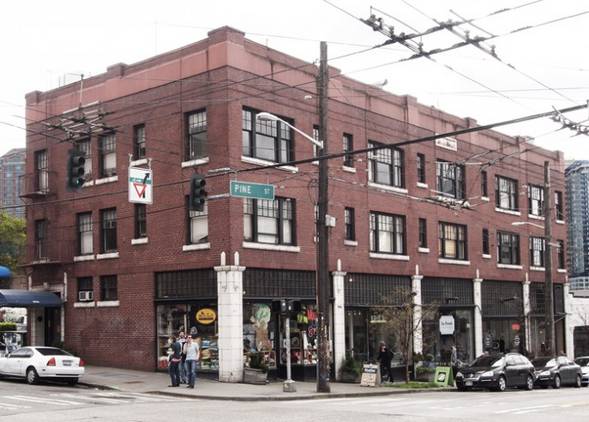 Public comment prior to the votes included nearby residents and a Bauhaus employee. The barista made an impassioned plea for the protection of the building as a cultural asset but the board ultimately ruled that the building did not adequately embody the characteristics of a specific architectural style nor qualify as a distinctive, identifiable element in its neighborhood at the base of Capitol Hill.

A preservation and development project is planned that will gut the buildings but preserve their structures and facade. The Pike Pine Urban Neighborhood Council said it did not support landmark nomination for either building saying it was satisfied with the conservation goals of the developers planning to rebuild the block.

The board will take up the nomination of the Pinevue Apartments building again on April 3rd.

Original Report: Today’s the day. The Seattle Landmarks Preservation Board meets Wednesday afternoon and included in its docket are two early 20th century Capitol Hill buildings slated for some major changes. The Melrose Building, home to Bauhaus, and the Pinevue Apartments, home to residents as well as businesses including Le Frock, Edie’s, Scout Apparel, Vutique, Wall of Sound and Spine & Crown Books, are up for consideration for the city’s landmark protection program. While it sounds a bit like a “witness protection program,” designation could be less dramatic, creating a rule set for protecting portions of the building even as development possibly proceeds. Our full report on the nominations is here.

Information on the 3:30 PM meeting — which includes time for public comment — is below. According to the agenda, the nomination discussions should start about 45 minutes into the proceedings around 4:15 PM. CHS will be there to cover Wednesday’s session as it is determined if the buildings go forward in the process.

NOTICE OF PUBLIC MEETING OF THE LANDMARKS PRESERVATION BOARD

to consider Landmark Nomination for the Following Properties:

The Landmarks Preservation Board will consider these nominations at its meeting on Wednesday, February 20, 2013 at 3:30 p.m. in the Seattle Municipal Tower, 700 5th Avenue, 40th Floor, Room 4060. 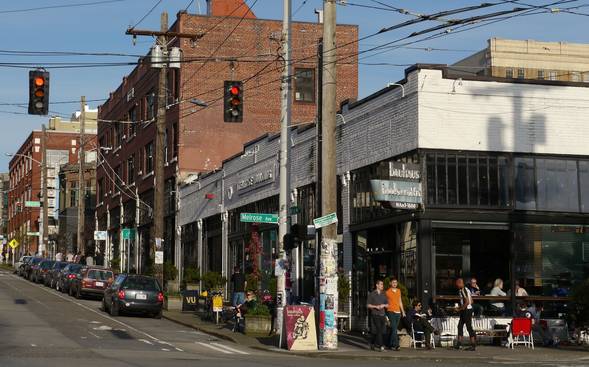 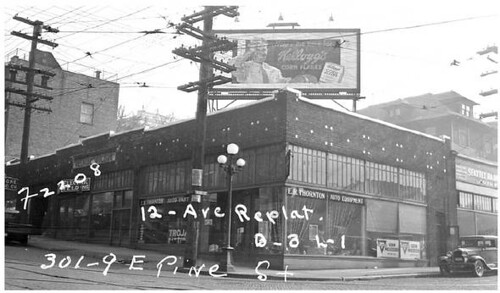 these properties are not landmarks. Lets not confuse nostalgia with truly meaningful architecture. Forcing people to preserve otherwise crumbling and rotting structures does nothing for anyone except preserve old memories at the expense of new ones. Doing this sort of restriction dilutes the significance of truly worthy properties. Age alone should not qualify a property as historically significant.

Sure they can be landmarks. The board just has to justify their historical significance and vote on it. I’m very sad that Cap Hill has become to what it has become today. Cap Hill was a very much different neighborhood from what I remembered 20 years ago. To me, Bauhaus Coffee Shop has been almost the gateway to downtown, while being the heart of Cap Hill’s diversity. I will miss the many late nights that I had used it as an office. I wish the cafe well in its new location in Ballard (coming soon?). I hope they can recreate a cool atmosphere , as they have been doing @ Melrose/Pine.

Clarification: If a building is designanted a landmark, that doesn’t mean it still can’t be altered. It would, however mean the significant details would need to be catelogued before any alterations occurred.

It goes without question that Capitol Hill (Pike/Pine in particular) has changed a lot in the past 20 years. It’s much more vibrant now than it ever was then (save a handful of bars and music venues.) One very important change from the early 1990s to now was the Nisqually earthquake of 2001. I had an office in Pioneer Square at the time and can tell you that “charm” quickly becomes irrelevant when bricks are raining around you!

My point here is that there are many, many structures in the area around Bauhaus that simply don’t live up to the safety standards we expect today. Certainly, historically significant buildings can be brought up to code, but this can be a complicated and expensive process. I agree that the individual history and character of this area (all neighborhoods, really) is important to protect, but I also believe that thoughtful, well designed new construction can help maintain this urban fabric for many, many decades to come.

Good point p-patch. We live on an earthquake fault line and ensuring safety should be our #1 priority.

p-patch, do you think that “thoughtful, well designed new construction” is the norm? I find it is the exception, and that we have a big problem.

I agree Ryan. There are a lot of generic 4-over-1 project out there, but given how much attention has been paid to Bauhaus and this block, I hope that the architects and developers make and honest attempt to deliver something appealing. My grandfather was in the landscaping business up until his death, and one rule he applied I think also applies to construction on and around the Hill: There are 5 year plants and there are 25 year plants. 25 year plants take time to grow, but they anchor the landscape in a way 5 year plants can’t.

The point here is that not every structure on the hill (old or new) is a keeper. The crappy buildings are like the 5 year plants – cheap to put up and cheap to take down. My point about the potential for a really good new design is more a hope that some of this new construction (maybe this site?) is thought of as something more permanent, even if it takes a little longer to set root and grow.

At least the old buildings have character unlike the antiseptic boxes that continue to replace them. Yes of course they need to be brought up to earthquake code but there’s nothing wrong with giving builders an extra couple of stories and less community resistance if they preserve the facades. I travel to SF quite frequently and it is not tearing down all its old buildings at the rate we are even though land prices there are substantially higher than here.

Old and character are not synonymous like so many here seem to believe. There are buildings worth saving and there are buildings that aren’t worth saving. I like the Bauhaus building but it’s not really special. 80 years ago when all these buildings were going up a lot of them were ugly. We kept the best from that era. 80 years from now only a handful of the buildings being built today will still stand. Look at a city like Rome do you think all those beautiful buildings were all built at the same time? No, each building represents a different part of Romes history. This is how cities grow. They keep building, and the best from each era are able to stay. Over the coarse of several hundred years you have a collection of great buildings. In my opinion seattle has moved past the point of needing to keep useless two story buildings, unless they are worthwhile. I’m glad they saved the building with the Area 51 furniture store. It’s time for seattle to stop building out and building up.

[…] known as the Timken Roller Bearing building for a long-time commercial tenant, the Pinevue advanced to the nomination stage of the process in February while the Melrose and Pine Bauhaus building fell by the wayside as the landmarks board […]