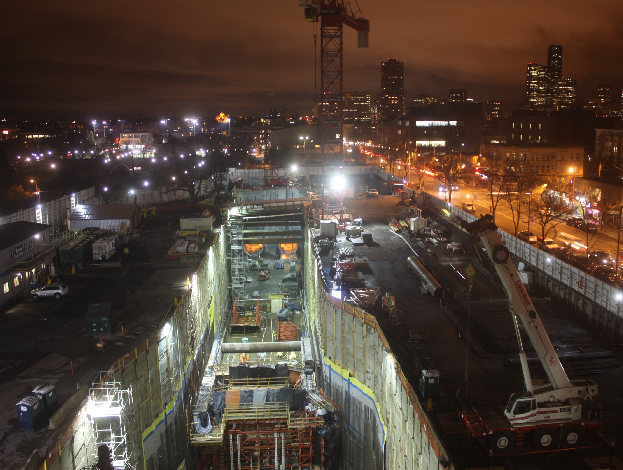 Regardless of their motivations, more than 130 people who live, work, go to school or otherwise affiliate with Capitol Hill showed up at the Cal Anderson Shelterhouse Thursday night because they gave a damn. More than 80 of those people gave enough of a damn to vote to keep a community process some four years in the making on the tracks by approving two appointees to the group formed to represent the Capitol Hill Community Council and the Capitol Hill Chamber of Commerce in discussions with Sound Transit for the transit oriented development of some 100,000 square feet of prime Broadway real estate owned by the agency.

Council president set a positive tone for what would at times be a fracturous process to arrive at a vote. Calling the turnout “more than amazing,” Bakan said, “What we say here echoes across the city.”

Following Wednesday night’s approval of the appointments, architect John Akamatsu, and writer Lisa Kothari will continue to represent the council as part of the Capitol Hill Champion group.

On the other side of the equation, more than 40 people voted against each confirmation. Some said they objected to the manner in which the council had appointed the Akamatsu and Kothari. Others voiced uncertainty about the motivations and actions to represent the community.

“This is a disagreement about policy and procedure,” said a man who identified himself as Pat Thompkins who was a frequent speaker and challenger of the appointees during the Thursday night session. “There’s really been a question of due diligence.”

CHS’s reported earlier this week on the objections raised in emails circulated by the grassroots Capitol Hill Coalition and Reasonable Density Seattle groups to the appointees and the Champion process. Citing fears of an expansion of the station’s possible 85-foot zoning to the rest of the Hill, the emails argued that community members should go to Thursday’s meeting to vote against the confirmations and make a stand against the “upzoning” of Capitol Hill.

Thursday’s council meeting went about as smoothly as one could hope with more than 130 participants in a format that often includes 30 to 40 attendees. This year’s president of the council Seattle Gay News publisher Bakan did his best to keep the session moving forward despite procedural objections from neighborhood activist Dennis Saxman.

Bakan also reminded everybody in attendance that there will be more opportunities for public feedback on the Capitol Hill Station development process soon as the City Council moves toward a springtime vote on legislation outlining its final agreement with Sound Transit on the project. “There will be more discussions to come,” Bakan said. That vote will, of course, involve public sessions of the City Council and the opportunity for public testimony on the development plan. The Urban Design Framework created by the city to capture community priorities for the development will inform the final package.

The community process to shape the development around the light rail station that is planned to open in 2016 dates back for years. Below, we’ve provided a selection of past CHS coverage of Capitol Hill Station development.

There were a few laughs along the way — including this question to the appointees about whether they were, indeed, “in the pocket” of developers:

I was present, and while I voted in the ‘aye’ group, it should be noted that the second voting photo is misleading – it wasn’t taken during voting. As the post otherwise says, the overall vote was 2:1 in favor of the two’s approval.

I am shocked to so liitle diversity at this meeting. Is this a meeting on Capitol Hill, Seattle, in 2013 or a White Citizens’ Council meeting in Mississippi in the 1950s?

One must ask themselves, if there was a lack of diversity, is it the responsibility of the group or the community. I feel CHS has done a superb job of reporting hyper-local stories and hyper-local governing issues, so if minority groups aren’t showing up, are they ‘in e know’ about the council?

This isn’t a shadowy group that is trying to exclude a large segment of our population.

Anyone can show up to these meetings. If getting more minorities to share their voices is important to you, maybe you could do some work to get the word out with under-represented groups? That would be more useful than complaining. This is definitely a situation you could help change, if you cared to.

CHS: Thanks for the list of links dating back to 2009. I know one of the folks on the Capitol Hill Coalition. This person as lived on Capitol Hill for about 2 years. Before folks protest, I recommend to everyone to get involved and informed with the ongoing process… then decide to take *informed* action. Thanks to all those informed folks who showed up and voted in favor of the Capitol Hill Champions (and related folks who have been working on this and going to meetings for years)!

The Capitol Hill TOD Champion recently applied for and received funding for a part time organizer to help engage parts of our community that are often underrepresented in neighborhood planning including people of color. The organizer will be starting soon and will need volunteers to help out. If you are interested in volunteering please contact me at abrennan(at)capitolhillhousing(dot)org.
http://www.capitolhillseattle.com/2013/02/12/are-you-a-capit

Most minorities live south of Capitol Hill, so maybe expect (guess) 3 – 5 % Blacks. One African American was standing next to me. Couldn’t see whole audience.

That nut has been cracked, Paul. No affiliation. Comes up in comments all the time.

I showed up at the meeting last night and voted because this blog had a good story about why the vote was important. Thanks CHS blog for informing people in the community about the meeting and encouraging us to vote.

Demographics also show that younger generations in Seattle tend to be more racially diverse than older generations. I only saw a hand full of people under the age of 30 at the meeting. I think the average age was over 50. CHS did a great job at publicizing this event. However, if you want to increase racial and age diversity at these meetings you might want to consider promoting them at places where younger people congregate, i.e. Capitol Hill clubs, restaurants, and coffee shops.

The Capitol Hill Chamber of Commerce has not now, nor never has been affilated or a member of the US Chamber of Commerce. We even have a statement saying so on our website homepage. Out tag line “Not your Daddy’s Chamber”, means just that; as a neighborhood Chamber we have a very different agenda than any national organizations. Our mission is to promote economic health and vitality in the Capitol Hill neighborhood. That includes supporting and advocating for arts, parks, schools, transportation, housing, business and residential interests.

Hey Justin – Many thanks for the excellent coverage. Most community based real time organizing efforts develop conflicts. This meeting was indeed a reflection of those divisions and divergent opinions.

All voices were heard, the vote was taken, and then a rousing round of applause from the room to congratulate the process, very democratic. The process worked. The challenge going forward is to continue to support the Champion Committee and launch other needed community project efforts on The Hill. A half dozen new project ideas have been floating at meetings of CHCC in the past few months.

When you get 140 talented and involved people to an evening meeting in the cold, overcrowded too small space, well, focused on needed organizing from art projects to park safety to pedestrian issues – all that energy and all those volunteers can accomplish a great deal.

Am I out of touch? (probably). Don’t younger people read blogs any more?

Actually the older-skewed nature of the crowd probably reflected the fact that many of them were homeowners motivated to attend by their development concerns.

Regular attendees of Capitol Hill Community Council meetings do tend to be much younger that the sample you saw: they bring enthusiasm and new ideas to the meetings.

BTW there is a long-standing habit of CHCC officers “graduating” to parenthood and staying on the hill: I can take you back several CHCC “generations” of former officers still living on the hill.

[…] a February meeting with record attendance and a discussion about the group’s involvement in the Capitol Hill Station development process that went right to the heart and soul of what the Capitol Hill Community Council is about, March […]

[…] cases. Many of the same people that turned to to try to kill Capitol Hill TOD and failed by a margin of 2:1 because of broad and representative community turnout,  turned out en mass to yesterday’s […]

[…] Design Framework that proponents like Hillenbrand and the Capitol Hill Champion group have been working to push forward in the process is a relatively agressive document for a community-shaped process. Shaped by neighborhood goals of […]

[…] Capitol Hill native John Akamatsu, an architect by trade, is running for re-election as Vice President of the Council. Akamatsu is a member of the Capitol Hill Champion, a joint committee of the Capitol Hill Community Council and the Capitol Hill Chamber of Commerce that deals with city planning issues around the ongoing Light Rail construction on Capitol Hill. Akamatsu’s appointment to the Champion was met with some controversy earlier this year over concerns about changes to building height restrictions, but was eventually approved in a crowded community vote. […]