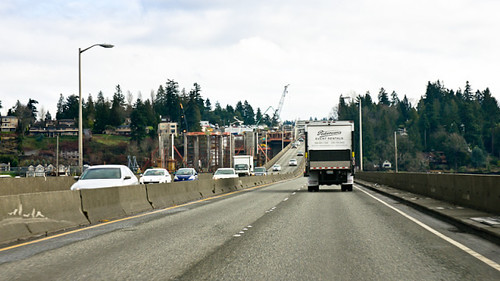 Washington State’s Department of Transportation saw a substantial shake-up this week, with the resignation of director Paula Hammond and her replacement by Lynn Peterson — Governor Inslee’s pick was Oregon Governor John Kitzhaber’s “top adviser on transportation and sustainability and a former Clackamas County chairwoman,”reported PubliCola, adding that the appointment was “welcome news for alternative-transportation advocates.”

But Peterson climbs aboard WSDOT with two megaprojects already in progress that threaten not simply Hammond’s reputation as on on-time, on-budget steward, but the state’s fiscal health. The Alaskan Way Viaduct Replacement project and SR 520 Bridge Replacement project amount to more than $7.2 billion in the latest iteration of their ever-changing budgets. (With the design for the western side not final, knowing how much it will cost seems presumptuous.)

In the case of the 520 bridge replacement, cracked pontoons are assembling in Lake Washington even as the project’s budget now lists $1.4 billion in “unfunded need.” This is down from $2 billion, but one way WSDOT has reducing expenses has been to outsource shortfalls. Last October the agency made news by lowballing its previous offer for MOHAI’s land: an earlier offer of $18 million was reduced to $4 million. If that stands, it could cripple or kill the museum, which was relying on WSDOT funds to defray its involuntary move to South Lake Union.

Funding for transit mitigation of viaduct demolition and tunnel construction, meanwhile, expires in June 2014, leaving King County Metro scrounging for $75 million. As Mike Lindblom reports in the Seattle Times, projected tolling revenue from the tunnel continues to disappoint; the estimate is now down to $165 million from $400 million. To make up 520 toll revenue lost to shunpikers, WSDOT hopes to toll I-90. (I-90 drivers object.)

A proposed $10-billion transportation package offers neither project any help — both had won only grudging approval in the Legislature, under the proviso-slash-threat that the megaprojects could expect no help on overruns, provoking years of contentious debate over who, then, would be responsible. Unfortunately, history does not supportmegaprojects coming in under budget. (Keep in mind that WSDOT had to spend half of the tunnel project’s total cash reserves on concessions designed to get any contractor to take on the project in the first place.)

“SR 99 tunneling machine problem nearly fixed” is the latest headline on the deep-bore tunneling machine. A “tolerance issue in the main-drive unit that occurred during assembly” meant that after its test-run in Japan it had to be disassembled and put back together.

This avoids the broader context of a decaying infrastructure (“America is one big pothole,” said Transportation Secretary Ray LaHood, on his way out the door). It’s by no means a given that the Legislature will pass that $10-billion package (which calls for a long-overdue rise in the gas tax, by ten cents over five years), but even so only $633 million is earmarked for highway maintenance.

In all the hubbub over the DBT, I missed the fact that the state already blew half of their reserve on luring in contractors. What a disaster-in-the-making.