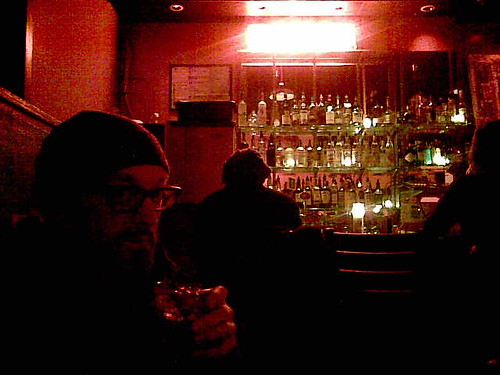 The grogginess lies a little heavier on the heads and hearts of fans of Capitol Hill bar the Bus Stop this Sunday. After eight years and a neighborhood odyssey that saw the bar make a move from a doomed — and now legendary — strip of E Pine nightlife to helping establish new outposts of Capitol Hill drink on E Olive Way, the Bus Stop’s Gary Zinter and Rodney Shrader have announced the bar will close by the end of April.

In the meantime, enjoy the party:

After eight amazing years, Gary and I have made the difficult decision that it’s time to move on.

Being part of your lives and this neighborhood has been one of the best experiences of my life. You are my friends and my family.

OK. Enough with the Oprah shit. We have until the end of the month to make this the awesomest party ever. As sad as we are, the bar has always been a place to celebrate and that’s the way we’d like to remember it.

Let’s send this old lady out in style!

We’ve connected with Zinter and hope to have more on the decision — and some of the stories of eight years in the bar business on Capitol Hill — later this week.

[mappress mapid=”28″]The Bus Stop opened in its current location of a former E Olive Way nail salon in 2008. A new wave of cafe and bars soon followed — with more to come. Its move came as the strip of seedy but much loved bars, etc. along E Pine where the hangout first opened (adjacent to a bus stop!) were cleared, demolished and left as an empty lot for years as this apartment development waited to move forward.

Known for its place in the Capitol Hill entertainment landscape as a booze-filled melting pot (yum!) of the cultures and sexualities of the area’s residents and regulars as well as for being perennially filled to overcapacity, the Bus Stop’s loss is part of a Capitol Hill bummer sandwich of bad news this year for beloved hangouts. On the eastern side of that sandwich, The Canterbury is slated for closure at the end of the year. At least you still have a few more weeks to enjoy the western edge.

This sucks! When my husband and I were trying to figure out where there is left to go on The Hill that’s not overrun with gauche Amazon dipshits on Saturday nights, this was the first place that came to mind.

Sad to hear. Went there awhile back on a bar crawl on my birthday. What a fun time that was.

Damn, another solid bar out… I’ll definitely have to drop by and pour one out. Hopefully something good will move in, or one of the neighbors will take it over. No goddamn coldstone or anything, please!

[…] a neighborhood favorite was about to close. The Bus Stop – as we know and love it — will shut down at the end of the month. But it’s probably not going […]