At some point Tuesday, the kitchen crew, wait staff and bartenders of Lost Lake Cafe may have enjoyed a quiet moment before they never stop working — again. Capitol Hill’s 24-hour dive — with a buildout budget somewhere between Big Mario’s and Poquitos according to co-owner Dave Meinert — has started its round-the-clock service of Pike/Pine after a whirlwind of work to whip the new space into shape for it big debut. Expect it to be open to the public for the first time Wednesday morning at 8 AM.

“I’ll probably have the Philly cheesesteak or the Cuban pulled pork sandwich,” Meinert said of his plans for his first official order inside the new joint that rises on 10th Ave as cousin to his 5 Point Cafe in Belltown.

Like the 5 Point, the plan is for Lost Lake’s kitchen to always be open serving bonafide diner chow, slices of pie and — except for the hours between 2 and 6 AM when you’ll have to drink coffee or ginger ale or coffee mixed with ginger ale — booze.

Lajeunesse moves tables as the record machine gets sorted out

To help make the operation work, Meinert and Jason Lajuenesse of Capitol Hill Block Party and Neumos have put 5 Point kitchen manager Jim Pearson and general manager Michele Young in charge of things up on the Hill, too.

The new space includes two separate entities joined by one kitchen. To the left, you’ll find the dark, taxidermy-friendly lounge with a long bar and booths worthy of passing out in around 3 in the morning. A wildcat prowls above. The wall-mounted pike rests and does not judge your pulltab habit. To the right, step into a brighter diner where you can choose a seat on a stool at the counter with a view of the pie case and the clock so you know just how much you are taking advantage of this 24-hour thing or at the rows of tables. Another set of booths also awaits you here — but this is the side for waking up, not blacking out.

The 3,000 square-foot Lost Lake was designed by Jeff Babienko who also created the plans for Barboza for Lajuenesse.

On the menu, expect $8 burgers, $15 steaks and drunk food like baskets of mac and cheese wedges and onion rings. It’s also always breakfast. Yes, you can eat pancakes and drink a rum and Coke. You are an adult. Kids, by the way, are also totally welcome.

Also, for you early birds and graveyard shifters, Lost Lake will soon be home to the Hill’s only 6a happy hour. $3.50 wells, $2 beers. Good morning.

CHS first told you about plans for the former Block Party partners Meinert and Lajuenesse to team up on a Pike/Pine cafe last September as planning began to transform former gay sex club Basic Plumbing into a dual-sided diner and lounge. By February, the highly anticipated project revealed its name evoking Pacific Northwest getaways and the good time found — sometimes — in a simpler world. As its planned spring opening drew near, an April fire scorched the building but only ended up setting the project back a few weeks while giving the project, already deep in nostalgia real and imagined, more back story for its legend.

In its 24-hour status, Lost Lake joins a short but much-loved list of Seattle restaurants including The Hurricane and Beth’s plus newcomers the Square Knot. Providing all-hours food and drink on the Hill has remained a coveted but elusive opportunity. There are plenty of Seattle U students and other creatures of the night to serve. Skillet — the closest in look and feel to Lost Lake on the diner end of things doesn’t try it. Only Glo’s does serious middle-of-the-night food and drink business on the Hill and even that is restricted to the weekend. Other late night players have started and usually faded away though E Madison’s IHOP is always an option.

Meanwhile, the overhaul of the old sex club around the corner from the Comet continues the changes on 10th Ave that have seen the Odd Fellows building reinvigorated and Elliott Bay Book Company succeeding in its Capitol Hill move. A brand new dive diner, for now, completes the street.

You can learn more at lostlakecafe.com.

UPDATE: Here’s a peek at the diner side of the equation via the Capitol Hill Block Party Facebook page:

And here’s a look at the launch day morning crew (Image: Lost Lake)

UPDATE: A few more images from the inside… including an important but overlooked element. Is there a view of the Space Needle from the men’s room? No. No there is not. 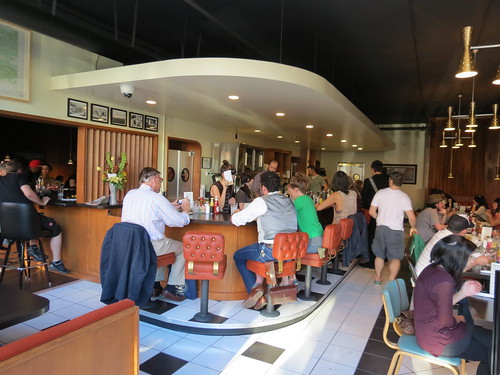 Restaurant from the front, originally uploaded by Lookin4TallGuys. 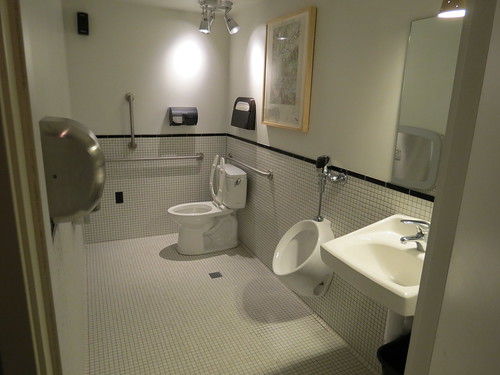 Has anybody glanced just 1 foot above the sparkling new sign and seen the rot, filth and probable human excrement on the floors above? What a dump. You would think the new owners would have demanded that the building owners at least paint! What a shit hole. I hope the folks that eat there don’t get all kinds of rotting diseases.

I live a block from here, easily within earshot of people standing in front if they’re raising their voices. While I have no beef with Pike/Pine nightlife (which I hear as a dull roar/white noise), I was pretty bummed to hear about the 24-hour aspect of this place, and now am especially irked to hear about a 6a happy hour! The thing about other 24-hour diners like the Hurricane and Beth’s (I don’t know about Square Knot) is that they not within shouting distance of where people are trying to live and sleep

I lived near 5 Point years ago. For sure it’ll be very loud on the weekends when the weather is good. The crowd around here is not the same though.

The 6am happy hour crowd folks are night-shift equivalents of the 3pm happy hour crowds: people looking for a drink and food after a long day at work. If they get sloppy drunk, it’ll likely be around 10am and it’s time to go home; by that time, the day shift should be awake and on the way to work, unbothered by what little raucous behavior may erupt from a diner.

i lived across from beth’s — it is in a residential neighborhood. it is at it’s worst between 2a and 3a when everyone leaves the four neighboring bars and stands outside to wait for a table or to smoke. the bars themselves (in particular the kiwi in it’s day) tended to become a dull roar by 12a when i was just getting to sleep. the rude and sustained awakening at 2a was often a shock.

Honestly, Elle, if you live a block from there then any kind of noise at *any* hour is pretty much a given. A couple of friends used to live in the building above the wild rose and burned out on the noise. The solution is pretty much to accept it or move. I doubt this will even make much of a blip on the situation already there, as that area can still be pretty loud and lively at 3am as everyone staggers around even though the bars closed.

I completely agree…this landlord has let what could be a nice addition to “old-stock” buildings in the neighborhood slowly fall apart. It’s not only an eye-sore, it’s a real shame, too. Given the activity on the ground level, you would think the landlord would finally invest in his property on the upper floors, too. (I’m sure a seismic retrofit would be both required and costly.) Still, it’s amazing that the city doesn’t make an effort to push for action on this property.

But does the “wall-mounted pike” sing?

I sat at Poquito’s a couple of days ago and looked at these upper windows just above the restaurant, revealing piles of crap you’re talking about: old insulation, etc.

I was surprised, too. Not very appetizing. Black out the windows, put up kitsch drapes…something to hide filth.

OH PLEEEEZZZZZ there is filth in every restaurant, some seen-some hidden.

Ate there this afternoon. The kitchen was super swamped (an hour for a sandwich!!!) which was ridiculous. The food was good enough for me to want to try them again, but I probably won’t be so forgiving the next time about the wait.

They just opened. Let them work out the logistics of the new crowds before you write them off.

Had their happy hour burger yesterday. No wait, a great, large burger and fries for $2.50! Really nice beer selection too. Definitely want to come back for breakfast this weekend. Staff were very friendly and efficient

living within earshot of the busiest part of capitol hill is probably not a good idea if you are concerned about noise.

Had the honor of being LL’s first paying customer yesterday morning (walked in just before 8:00 a.m., not realizing that everybody else already there were either employees or, presumably, owners), but apparently that was before things got crazy! There’s always that rush to try “the new place” that generally lasts several weeks before an establishment settles into a more routine customer turnover. Still, this place is definitely going to be popular post-closing time, as Hillsters will no longer have to drunk drive down to The 5 Point or Hurricane for their early morning alcohol-absorbing grease fix.

I wonder if Meinert DID have the cuban as his “first meal.” He was there last night when *I* tried it for dinner, and it was pretty meh. Dry and uninspired. The flavor wasn’t terrible though. I definitely won’t be ordering it again.

[…] of one of the most highly anticipated new joints on Capitol Hill earlier this week when Lost Lake welcomed its first post-last call crowds on 10th Ave, it’s high time to pop the cap about what’s going on with […]

[…] Party, he and Meinert have continued to collaborate on food and drink establishments including the May opening of 24-hour diner Lost […]

[…] 24-hour “dive” diner/bar concept Lost Lake debuted in May in the former home a gay sex club on 10th at Pike adjacent the Comet. Meinert, a longtime area […]