New trolley buses coming by 2015
CHS has reported on the long, winding road to replacing Metro’s fleet of aging trolley buses. This week, King County has announced it is done shopping:

King County Metro Transit announced today it will replace its aging trolley fleet with new all-electric New Flyer coaches that will take about one-third less energy to power. Metro is second only to San Francisco in having the largest electric trolley fleet in the nation.

Metro plans to initially purchase up to 141 trolley buses – about 10 percent of its entire fleet – under a contract with New Flyer totaling up to $164 million. Future bus purchases will be dependent on fleet needs and whether Metro is able to avoid service reductions in the coming years.

“Electric trolleys have a lot of fans, and I’m one of them,” said King County Executive Dow Constantine. “They’re quiet, they run clean, they’re part of our transit heritage, and studies confirm they’re the best for moving riders in our very hilly and dense urban environment.”

Federal and Metro capital funds will be used to purchase the buses, with the first prototype expected to arrive in 2014. Riders can expect to see new coaches hit the streets in 2015.

The announcement includes some data on Capitol Hill’s new rides:

The trolleys also will be able to operate off-wire on battery power for short distances – a feature that will allow the bus to reliably reroute around collisions without calling for a Metro push truck. It also will reduce the need to substitute diesel buses when construction affects routes along electric bus corridors.

The new buses will have low floors for easier and faster boarding and exiting. They include an updated system to secure wheelchairs, and the 60 foot buses will have three doors, air conditioning and the ability to kneel the full length of the bus.

“The City of Seattle is buying more than 5,000 hours of added service per year through early 2016 on nine high ridership bus routes in Seattle,” city officials announced June 16. The route increases are being funded through the Bridging the Gap levy that has purchased “45,000 hours of transit service each year” since 2008 according to a City of Seattle release.

UPDATE: Here is Seattle Transit Blog’s take on the announcement.

The monetary booster shot comes during trying times for King County Metro, and will ideally reduce the wait time – and frustration – for some bus commuters. 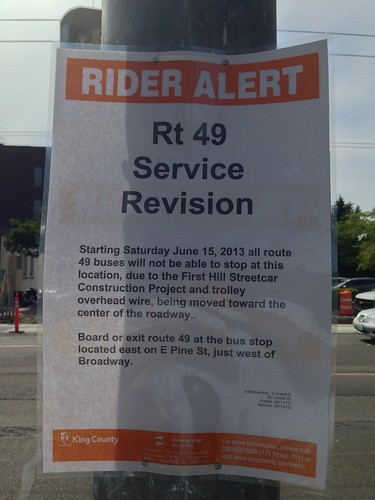 “It’s great to be able to add this service at a time of ridership growth,” King County Metro general manager Kevin Desmond said in a statement. The City of Seattle release claims the added funds will “increase evening and weekend frequency on high-ridership routes from 30 to 15 minutes or from 60 to 30 minutes.” Serving as a relatively small fix, officials say there is still more work to be done to create long term solutions.

Since 2008 the City of Seattle has used Bridging the Gap funds to purchase up to 45,000 hours of transit service each year. Using $750,000 in savings from Levy-funded projects, the City of Seattle is buying 5,000 additional hours of service on priority bus routes identified in the Transit Master Plan that serve SR 99, Interstate 5, and major arterial streets, including:

I love the SEPTA Image!!!

Meanwhile, the buses continue to disintegrate. Supposedly KC Metro has a shop where they can fix interior stuff like seats that are getting ripped up with age, but it’s hardly happening at all. Most all the Gillig trolly buses the flip down seat to accommodate wheel chairs is falling apart. Now the flip down seats on the low floor New Flyer and the high floor New Flyer buses are falling apart as well. If we’re not getting new stock to replace the current stock of Gillig trolley buses (which are actually power plants taken from old AMG buses) we’re going to be limping along on thread-bare buses for two years.

Interesting that the illustration is of a New Flyer, but unless they have some new technology the bus shown doesn’t use catenary to deliver power to the bus.

I guess I don’t know what you mean. The bus in the picture appears equipped to run exactly the same way as current trolley buses with two arms that connect to the overhead wires via what they call a shoe on the end of each arm. I would think if they connected in the manner of the SLUT train, which is what I find when I look up “catenary” online, they might come unhooked less often and require fewer operator reconnects.

$1.16 million per bus? no wonder they have budget problems

Have you been shopping around for buses lately?

Bike News Roundup: Get ready to be jealous of bike infrastructure in … Indianapolis? | Seattle Bike Blog

[…] Metro plans to replace “up to 141 trolley buses” in 2015, says Rochelle UP, using a combination of federal and agency capital funds. (Metro’s projected service cuts are due to shortfalls in operational funding.) The agency currently runs a fleet of 159. Though the capital and operational budgets are separate, she noted that potential service cuts could factor into Metro’s order; at a given point, less bus service means fewer buses. […]