On New Year’s Eve 1985, a group of five women opened the doors to The Wildrose bar at 11th and E Pike. After 30 years, the “place for women” where “all are welcomed” is  almost the longest running lesbian bar in the U.S., not to mention a Capitol Hill cultural institution (San Francisco’s lesbian bar The Wild Side West has been open at the same location since 1976).

Part clubhouse, part refuge, part restaurant, with a heavy dose of dancing and Seahawks on the TV, the Rose continues to be Seattle’s “third space” for many of the area’s gay women.

Shelley Brothers and Martha Manning have co-owned the Rose since 2005, although both were working and drinking at the bar years before taking it over. The duo remain a constant presence inside the Rose today, holding down full-time hours behind the bar.

“Thirty years gets a little lost on us because it’s so day to day, until you sit down and really think bout it,” Brothers told CHS.

On Wednesday, Brothers and Manning will celebrate the Rose’s 30th with a Pride-style block-party bash. The celebration will shut down part of 11th Ave to make way for a heated outdoor tent, DJ’s, burlesque, a buffet dinner, and a midnight champagne toast. We suspect there will be lots of reminiscing as well.

Sarah Toce, publisher of The Seattle Lesbian, told CHS the bar was a favorite hangout when she first moved to town.

“I remember being a young newcomer to Seattle and meeting my friends for a drink and nachos at the Wildrose,” Toce said. “My wife and I stop by from time to time for Taco Tuesday, and our friends come out to support the place and what it stands for as well.” 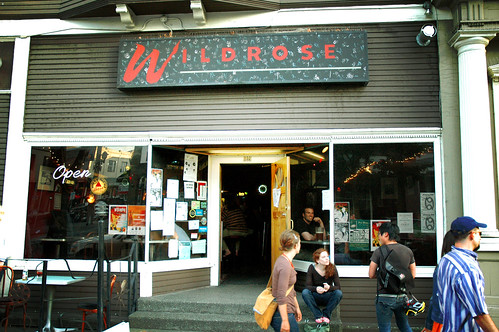 Bryher Herak and her four business partners opened the Wildrose at a time when lesbian bars were more commonplace on Capitol Hill — and more exclusive. When Brothers arrived in Seattle in 1992, places like the Wildrose were leery of male patrons. “It was a time when there was a lot of violence towards gay women,” Brothers said.

As Seattle’s gay population has grown and dispersed to other parts of the city, gay bars have also diversified. The Wildrose seeks to be as inclusive as a lesbian bar can be (no ladies-only nights here), but the bedrock of the business continues to be providing a safe hangout for women.

“We do see a lot of the young lesbians seeking out the bar,” Brothers said. “Many of our customers come from areas where there’s not any type of gay bar, much less a lesbian bar.”

The century-old 11th and E Pike building has a long history of hosting bars. According to Seattlebars.org, watering holes have occupied the space since the Great Depression.

Back in 2002, The Stranger compiled a good history of The Wildrose, starting with the original five female owners who opened its doors to hundreds eager patrons on New Year’s Eve. Since then, the bar’s interior has remained essentially untouched. The biggest change came in 2011 when Brothers and Manning removed the drop ceiling in the bar’s back room. The bathrooms also got a welcomed sprucing up.

As The Wildrose celebrates its 30-year milestone, lesbian bars in other cities are on the decline. Earlier this year owners of San Francisco’s iconic Lexington Club announced they would shutter sometime in early 2015. According to Brothers, the Rose will be the only lesbian-specific bar north of Los Angeles and west of Denver.

The Rose’s future appears to be solid despite Pike/Pine’s changing nightlife environment. Brothers and Manning said they have no plans to sell the bar and have a good relationship with the building owner. To start 2012, CHS reported on the $4.3 million deal to acquire The Winston Apartments building the Rose calls home. Later that year, the Rose owners secured a lease agreement with Credence Capital through 2015.

Meanwhile, Pike/Pine’s nightlife culture and residential population is undergoing massive change. The neighbors are changing also. CHS recently reported on Castle Megastore’s plans to move off Broadway into a space next door to The Wildrose. After five years as a bastion of LGBT nightlife, The Lobby Bar is also on the move after leaving E Pike earlier this year.

“It makes me very thankful to our community, to our patrons, and to our city,” Brothers said. “If the entire city wasn’t behind us, we couldn’t do it.”

Longtime CHS advertiser The Wildrose is located at 1021 E Pike. You can learn more at thewildrosebar.com.

I see from a previous post that their lease ends in 2015. I know I complain about the ‘Rose, but it’s important to have a visible lesbian community. I hope we will see news shortly about a long term lease renewal (although this is Capitol Hill, so I’m not holding my breath).

Brothers & Manning, what are the chances of that happening?

I think it’s great the bar has lasted so long. Congratulations!

This is an historic institution that I want to see in place for another 30 years! I see that their lease is up this year. Please let us know what we can do to ensure queerness stays on the ever-changing Capitol Hill.

[…] big milestone marked this week on this E Pike block. Nearby neighbor lesbian bar the Wildrose celebrated 30 years on Capitol Hill with a New Year’s Eve street party. In 2014, the Neumos family celebrated 20 years of […]

[…] The Wildrose just turned 30. Now Doghouse Leathers, another of the neighborhood’s defining LGBTQ businesses, is ready to expand after nine years as Capitol Hill’s outlet for male-focused kink. […]

the Lexington like Wild Side West, in San Francisco, are ‘Lesbian’ establishments. All are welcome, however the focus still remains w4w (women for women).
Sadly, the Lex lost its lease, and will close sometime in Spring 2015.
As for the WildRose. It IS NOT A LESBIAN BAR. It has ceased being what it was established for 30 years ago in the first place for women to meet women in a safe atmosphere.
The WildRose would rather capitalize on cisgendered gentrifcation in a queer establishment versus revamping it. Its all about the money. They no longer have a kitchen, or a menu. But you can squeeze in on a Tues for a mostly unedible taco, if that is they still have any for sale. They sling overpriced adult beverages which seem watered down, though they may not be, the pour is ‘inconsistent,’ bartendar to bartendar there. They would rather served cisgendered men in there now. Men who gock & stare. Cisgendered male patrons who abuse the single unisex bathroom intended for men, & transgendered individuals. I suppose if your transgender you should just tolerate the stench of urine which often runs down and encombasses the walls, toilet paper, & paper towel dispensers & often the sink. You can almost certainly find an employee, or owner who simply does not care enough and will tell you they are sorry, but not remedy the situation or even clean the restroom upon reporting the conditions of it.
In fact many days of the week there is a cover just to get in, not an unreasonable amount $3-5, however, name another Queer bar on Capital Hill or any other queer establishment in a metropolis city doing that on the weekend every weekend? For unknown DJ’s who work for the Rose as bartendars. Or just forntheir annual beer garden. It seems they enjoy getting their patrons smashed on cheap brews and house liquor, and promptly closing by midnight.
They used to have a pool table, and a league. They used to have a jam packed karaoke night, as well as annual karaoke get togethers on the holidays which would ring in so many people.
Sure the owners have tried many things over the last 10 years to ‘revamp’ a dying bar. New juke box, Guitar Hero night, coin-op games like: boxing, shooting, even pinball. But what Shelley & Martha have really done is they forgot all about the up and coming ladies. Young woman coming out, and having no real place to patron for such. Now parties consist of their softball patrons throwing pricate gatherings & or local artists who comsign their work the the seating area near the bar.
They have mediocre DJ’s spinning terribly chosen playlists that make no sense when switching songs. The space isn’t big snough to even be a club. The bar is ‘too small,’ & their dance floor equally as small. They no longer have an outdoor smoking area, & if you are a smoker be prepared to be asked for a smoke everytime you head outside, by homeless people or passing by people.
There is no accountablility from the owners of this bar. They are in it to ‘break even’ every year. In fact the ONLY thing keeping them going is their annual beer garden on Pride.
Even that is a joke. The staff they have is ‘selective’ at best when choosing whom to search and why prior to entering. If you are transgender and you don’t march your current drivers liscense you WILL be turned away no matter how long you happen to have been a paying friendly patron.
The mission statement or slogan they have used is outdated and at best unwelcoming in light of issues stated here already. ALL are in fact, are not welcome.
Soon this business will be no more, and it serves them right. Operating a shady business where your most important patrons are your employees, your softball team, & your owners. They never wait for beverages, let alone pay for them.
It would do the LGBTQ community & the rest of the community a justice by closing down.
I only hope there is someone else smart enough to open a new bar, a Lesbian bar.

Gentrifcation is an amazing idea, however it has no place at this time in the queer community when it effects how we solociaze & gather. This is why many Lesbian patrons now frequent Gay bars on the hill.
They carry rules while being open to cisgendered people.
Cisgendered people have plenty of their own bars to patron all over Capital Hill.
Shelley & Martha merely want to capitalize on the wallets of these cisgendered males, while neglecting to keep everyone safe. While neglecting to keep their restroom facilites clean. I have been to many bars around the world, the WildRose certainly has the absolute worst UniSex barhroom I have ever used. Since they allowed cisgendered men in, without creating bathrroms to accomodate them it has been a trashed room that smells like the streets of the Tenderloin in downtown San Fransisco. Funny how the queer bars in the Tenderloin don’t smell like the streets, funny their unisex restrooms are clean and don’t smell like stale male urine.

I never knew that Gay women could drink so much.

[…] 30 years. The “no frills” bar currently ties with San Francisco’s The Wild Side West as the longest running lesbian bar in […]

[…] 30 years. The “no frills” bar currently ties with San Francisco’s The Wild Side West as the longest running lesbian bar in […]

[…] Still, Brothers said it only takes one or two belligerent bigots to unsettle the neighborhood. “People just don’t realize where they are,” she told Murray, who later beamed with pride when he found out his 31 years on Capitol Hill put him one year ahead of the Wildrose. […]

[…] 30 years. The “no frills” bar currently ties with San Francisco’s The Wild Side West as the longest running lesbian bar in America. Seattle Pride honors the hard work, dedication and loyalty to the Seattle […]