Someday, you may stroll along a sunset promenade — exactly as John Charles Olmsted intended way back in 1908 (Image: Volunteer Park Trust)

Even with Seattle in an advisory water warning phase following weeks of extraordinarily high temperatures, it looks like we’ll need to wait until 2017 to see what’s happening with the Volunteer Park Reservoir.

Back in 2013, the city began a study of the reservoir, with an eye to determining if it’s still needed, but the study is not yet complete.

Seattle Public Utilities is about to begin an 18-month seismic study of the reservoir, said SPU spokesman Andy Ryan.

The new facet of the study, which should be done in early 2017, will determine how well the 22-million gallon reservoir would hold up in an earthquake. That information — and how much it might cost to give it a seismic retrofit — will help inform the longer-term decision of whether or not it should continue to be part of the city’s water system.

Right now, the water in Volunteer Park is not considered usable for drinking water, Ryan said.

In July, officials announced a voluntary “advisory” water warning phase due to low rivers, and high temperatures around Seattle

Since it the reservoir is not covered, it doesn’t meet health department requirements. The water would still be useful to help the fire department fight fires in the neighborhood, and, of course, it is quite lovely.

The seismic suitability is just one of a number of factors SPU might choose to consider. The SPU website states: “SPU will study the impact the out-of-service facilities have on Seattle’s overall drinking water system, make evaluations, and determine whether these reservoirs can be permanently taken out of service.”

Of course, it’s difficult to predict how much water the city will need in the future. There will certainly be more people. Less certain are the impacts of climate change, and how often it might lead to hot, dry years like the one we’re having. These factors and more are likely to be part of SPU’s decision making process. 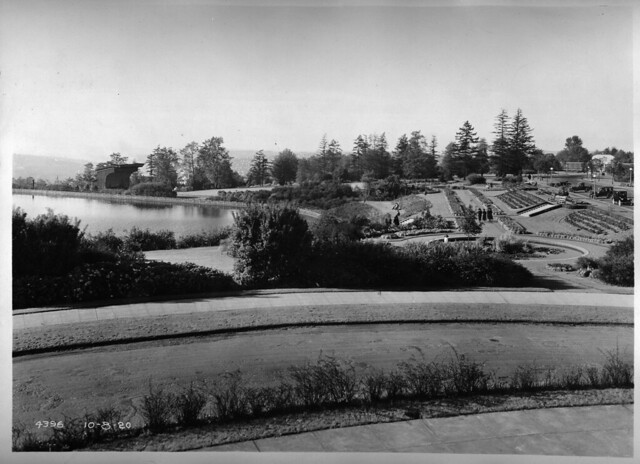 Seattle began covering reservoirs with the Maple Leaf Reservoir in 1995. In 2004, the city covered the Lincoln reservoir, and we now know it as Cal Anderson Park. SPU has covered four other reservoirs since Lincoln.

Seattle Parks does not have a plan or project for the area, and no funding has been set aside for it, a Seattle Parks spokesperson said.

Local nonprofit the Volunteer Park Trust has dreams of making the area into a reflecting pool/promenade, but that will also have to wait until SPU makes its decision about the reservoir.

Also, to answer a possibly burning water-related question: No, SPU does not keep water in the nearby Volunteer Park Water Tower, Ryan said. He’s not sure what’s inside, but he knows it’s not connected to Seattle’s drinking water system.

8 thoughts on “Even with Seattle water worries, Volunteer Park Reservoir still being considered for decommissioning”