The 43: staying put, at some times of day (Image: Ryan Packer)

With the days dwindling before the start of light rail service on Capitol Hill, the King County Metropolitan Council unanimously approved Monday the set of changes to bus service that will commence with the start of U-Link service next year. We have been discussing those changes in this space since April, and along the way public comment has shaped what this proposal contains, in large part by prompting Metro to reduce the amount of dramatic changes that will be made on Capitol Hill.

A well-attended meeting in Sand Point earlier this month appears to have been the final nudge for King County Council member Rod Dembowski to introduce an amendment in committee that retains the route 43 in its entirety during peak hours, retaining a direct connection between Montlake and downtown. This amendment passed, and also included a handful of last minute changes to northeast Seattle routes. The deletion of the 43 in favor of increased frequency on the 48 and the rerouting of the route 11 to take Olive Way to get downtown was the most unpopular segment of the restructure proposal. Now the 43 is here to stay, but only at 30-minute frequency at peak times.

Monday in comments before the vote, Dembrowski said Metro should achieve “Nordstrom level of service” when it comes to customer feedback and expressed his concerns that “one-seat rides” are going away for many riders outside the city’s core.

Outgoing chair Larry Phillips said the council found the more than 1,000 comments received on the changes “very helpful” and noted that Metro has seen “higher ridership” on “more productive routes.”

The optimization plan is “a little bit of a leap of faith,” Dembrowski said promising that Metro will do surveys within a year following the changes to find out how service is working and reminding everybody that we’ll do this again in six years when the U-District light rail station opens.

Metro and the council are touting the frequency of the new network, but most of the increased headways are coming not from reducing redundancies with light rail but rather through Seattle’s increased funding for transit service that is adding hours to buses all over the city. 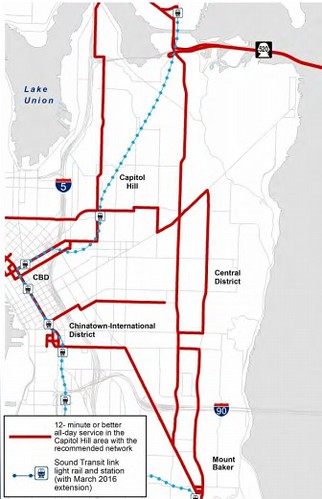 A map showing 12 minute or better service after restructure- mostly made up of Prop 1 improvements. -King County Metro

What does remain in the proposal is an odd deviation that has been added to the route 8, and the revised route 11. In addition to now being served by the 8, 19th Avenue between E Madison Street and E Thomas St will also become the recipient of downtown service both southbound (on the route 12) and northbound (on the route 11).  With the news of the 43’s return, unlikely to vary in route because the 43 runs on trolley wire, this means that unless Metro moves the bus stop at Miller Community Center across the street to the west side of 19th, which it is unlikely to do, riders at 19th Avenue E and E Thomas Street will be able to catch a downtown bus during rush hour at any of three corners of the intersection. Those riders would be wise to download One Bus Away to determine which bus to try and catch. 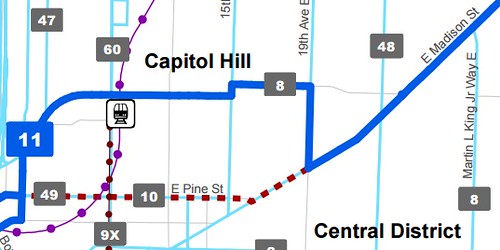 King County Metro’s service guidelines for service design call for “Easy to understand, appropriate service”: “A simple transit network is easier for riders to understand and use than a complex network.” It is unknown exactly how the proposed deviation is justified by ridership in that corridor so as to seem to override the agency’s own guidelines.

The one thing that is clear, however, is that between this year’s improvements to frequency and next year’s introduction of light rail service, many more transit riders on Capitol Hill should have the ability to get to their destinations at all times of day faster and more reliably.

You can read about the last minute changes that were passed by the council here.