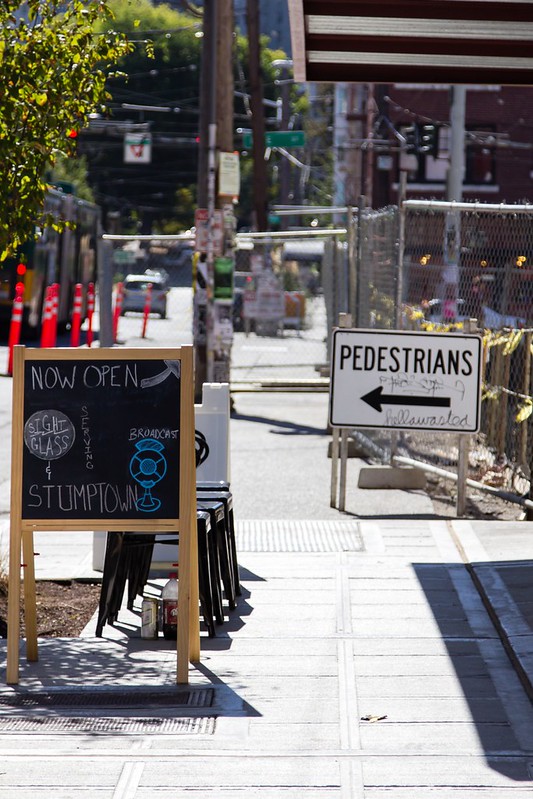 “Sidewalk closed” signs are ubiquitous in boom-era Capitol Hill. A proposed rule change by the Seattle Department of Transportation would limit those sidewalk closures by making construction crews prove that closing a sidewalk is the absolute last resort to getting its work done.

UPDATE 10/26/2015: SDOT says the deadline to comment on the proposed rules is coming up:

If a sidewalk closure is needed, the new rules would require developers to put up a temporary walkway lined with water-filled barriers instead of the common orange tube “candlesticks.”

As the Seattle Bike Blog notes, the new rules do not specifically outline how to manage bike lane closures. The rules do give SDOT the right to evaluate bike traffic impacts, but they don’t go as far as mandating and specifying temporary bike lanes in construction zones.

Meanwhile, Mayor Ed Murray is working on the Vision Zero plan to end traffic fatalities and serious injuries in the city by 2030. Part of that plan will include creating more pedestrian friendly corridors.

SEATTLE – Requests for construction-related closures of Seattle sidewalks will soon come under more stringent city review in an effort to make it easier and safer for people to walk here. The Seattle Department of Transportation (SDOT) is proposing a revised Director’s Rule for Pedestrian Mobility in and Around Work Zones (SDOT DR 10-2015). The expanded rule emphasizes sidewalk closures as a last resort, when there is no other reasonable solution to keep a public walkway open.

“We want contractors and pedestrians to know what to expect, and we want to provide swift and certain enforcement when pedestrian access regulations are violated,” explained SDOT Director Scott Kubly. “Seattle considers safety for people walking and riding bikes a top priority because if they are hit, the likelihood of injury is almost 100 percent.”

The newly updated rule establishes standards for meeting Seattle Municipal Code requirements, including materials, their placement, and steps to ensure American Disability Act (ADA) compliance. These include calling for water-filled barriers to protect pedestrians around construction sites, and eliminating the orange tube delineators known as candlesticks as an option on arterials. This change alone could be life-saving, as the barriers were September 8, 2015 when a car crashed into them near a very busy bike lane along 2nd Avenue, near Pike Street. The driver was arrested for speeding but no one was hurt; the barriers worked as designed.

“This new rule means fewer people walking into traffic or zigzagging across intersections on their way home,” said Councilmember Tom Rasmussen, Chair of the Council’s Transportation Committee. “This is the result of SDOT’s collaboration with businesses, pedestrian and bicycle groups, and disability advocates. It’s heartening to know it’ll be easier to get around town as construction continues to boom.”

“We make safety personal; the people who interface with our projects are not only our end users, but also our own family and community members,” said Howard S. Wright Senior Safety Health & Environmental Manager Brian Sorensen. “It is important to see a refocus on the significance of safe pedestrian mobility and to “raise the bar” for our community.”

In the past, if contractors kept pedestrian access on the same side of the street as construction they could get a mobility credit; now that pedestrian routing approach is the proposed standard. The updated rule is supported by a new progressive enforcement procedure that focuses on providing clear direction to reduce infractions, and heightened attention on those with cumulative violations.

“The Alliance for Pioneer Square strongly supports improvements to pedestrian safety around construction zones,” said Alliance Public Realm Director Liz Stenning. “With an unprecedented number of development and construction projects throughout Pioneer Square and the rest of downtown, safe and efficient travel for all users and those with limited mobility should be prioritized.”

City of Seattle agencies! Let’s make a deal. Do this, and I’ll vote yes on your next mega-tax transportation proposal. For now, my feet need a break from all the construction dodging.

Yay! What took them so long?

Thank you, it’s about time!

SDOT is as guilty as any of them. They’d better follow their own rules.

One topic that never comes up in discussions about construction impacts on our city, are the spotty road patches that come with new construction projects.

In many cases a new or recently paved road is torn open for a new building to connect to the city’s main sewer line. The hole or trench that is dug is temporarily covered with a steel plate. When the trench is then filled the result is usually a shoddy patch. Improper compaction and substandard leveling often creates dips, holes, and bumps in an otherwise perfectly good road.

With the pace of new buildings this is happening all over the city. The pavement change, dips and bumps create unsafe conditions for bicyclists and are hard on car tires as well.

Shouldn’t SDOT have some sort of standard for these kind of patches? Seattle Department of Development has requirements for new developments to improve the sidewalk (and now avoid sidewalk closures while under construction)
But the responsibilities of the developer seem to stop at the curb line and our streets(i.e. bicyclists) are suffering because of it.

Developers have a responsibiity to improve the sidewalk

This city mouse almost broke its neck last weekend walking on one of Seattle’s country lanes. There were no sidewalks and with poorly lit street, was almost flattened by a speedy roadster. Saved self by jumping sideway off street only to discover there was a deep ditch which resulted in an unplanned tumble. Came back with scraped paws, muddied 4th best dress, and one broken 3″ heel. Yes. Perhaps the city can finish building sidewalks somewhere north of here. Not sure where as everything was dark and stormy. But who knew such place exists.