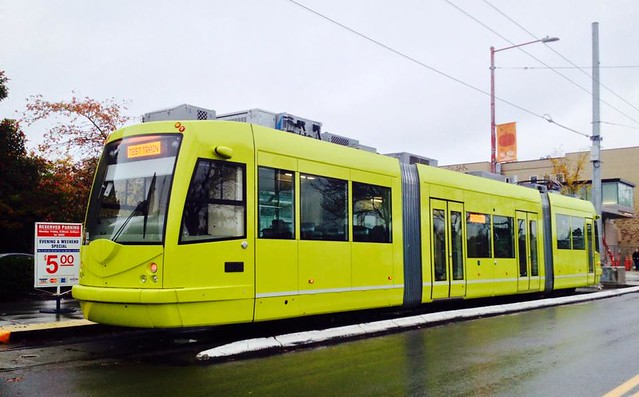 As Seattle Department of Transportation officials are preparing the First Hill Streetcar for the start of service, they are also ramping up the process of educating people who are living, going to school, and working around the 2.5-mile Capitol Hill to Pioneer Square route about how the system works — and, importantly, how to be safe around the tracks and trolleys. They are also working to address a major hindrance to efficient service — an ongoing spate of poorly parked cars and trucks that have repeatedly caused the trains to come to a halt during testing in recent weeks.

Next week, SDOT will host a “First Hill Streetcar Safety Day” to help make sure the line gets off to the safest start possible as the streets along the line mix with streetcar, motor vehicle, and pedestrian traffic:

The Seattle Department of Transportation (SDOT) will host a “First Hill Streetcar Safety Day” on Thursday, December 3 from 11a.m. to 3 p.m. at three station locations.

The Safety Day will feature Metro streetcar operators onboard stationary streetcars at the Broadway & Denny, 14th & Washington, and Occidental & Jackson stations. The public is invited to come aboard to check out the new streetcars, ask questions about how they work and learn streetcar safety tips.

“As we simulate service without passengers, we want to help everyone understand how to be safe around operating streetcars,” said Ethan Melone, SDOT’s rail transit manager. “Whether you drive, bike, or walk near the streetcar, we want you to be alert and safe.”

If you can’t make it to Safety Day, here are few things you need to know:

We’re not exactly sure what’s behind holding the event on a Thursday but we’ll check with officials to see if we can get any hints about when fare service will begin.

One thing the safety day isn’t going to address but that needs to be solved is the route’s parking problems. Officials haven’t said anything publicly about the problems that have cropped up especially along Broadway when cars and trucks park at angles that partially block the streetcar route but tell CHS that there may be a need for signs and markings changes if there are repeat trouble spots.

“SDOT has observed these issues during testing and will be working with SPD on strategies to minimize the occurrences and their impacts,” an SDOT spokesperson told CHS. SDOT and Seattle Police are also “developing a strategy for faster response times when parking violations\ blockages occur.” In other words, be careful when you park or your car might end up hauled away — in a hurry.

Meanwhile, new wayfinding maps have been installed at the 10 stops along the First Hill Streetcar route. They’re designed to help riders find their way around the streets and “plan your trip” —

But, as Seattle Transit Blog noted, as navigational aids, the maps leave quite a bit to be desired:

As testing for the First Hill Streetcar has proceeded, the final station touches have been added, including frosted glass and station amenities such as maps and rider information. Yet in a triumph of form over function, the well-designed maps omit just about every important piece of transit information that a rider might want to know. Their modal isolation – showing only two disconnected streetcar lines miles apart – bears no relation to the reasons riders would consult the map. Very few people will stand at Broadway & Marion and ask, “Is there another streetcar in this city somewhere?” as opposed to “Where can I travel to from here, and how long will it take me?”

After months of delays, the First Hill Streetcar entered a “new phase” of testing in October. When service begins, the new streetcars will arrive at the 10 stops every 10 to 15 minutes from 5 AM to 1 AM Monday through Saturday, and Sundays from 10 AM to 8 PM. The streetcars will share traffic lanes with motor vehicles. The streetcar’s current northern terminus will deliver riders to Broadway and Denny — across the street from light rail service at Capitol Hill Station when that line opens in March. Planning to extend the streetcar and its accompanying bikeway north on Broadway to Roy by 2017 is also underway.

UPDATE 12/11/15 1:30 PM: Not to be totally obsessed by the parking problem but we continue to hear regularly occurrences of the streetcar being stopped in its tracks by poorly parked vehicles. For example, it happened again Thursday night. SDOT says its new streetcars have cameras, not side mirrors making the trolleys narrower and less likely to get stuck and has said it may turn to signage to help people be more aware of the problem but it’s hard to see how this won’t be an ongoing problem.

That’s what tow trucks are for. Learn to park.

I want to see old school giant cow catchers put on the front of these things. Just push all the cars out of the way!

Its a shame so much time, effort and cost is needed to remind people to exercise basic life skills such as being situationally aware.

Two of my kids come by this fairly easily. The third is just continuously oblivious to her surroundings. I don’t see driving in her future.

Good for you! That’s practical knowledge. Not everybody should take up driving. My 18-year-old daughter, for instance. She is pushed by relatives to take driver ed, but she’s perfectly happy to text her friends while riding the direct bus to South Seattle College.

Streetcars are an inflexible form of transportation….any number of problems can occur without any ability to maneuver around them…no detours for streetcars.

What century were streecars designed in?

Ooh, but they’re new and shiny, and they ring bells.

The same century as cars

Portland has had this (in two versions: the Max and the Streetcar) for years. Can Seattle figure out how not to walk into the path of a train and not to park on the tracks? Stay tuned. I watched two clueless pedestrians last week in the U District walk right into the path of an ambulance speeding through with lights and sirens. We may decrease the surplus population.

“Officials haven’t said anything publicly about the problems that have cropped up especially along Broadway when cars and trucks park at angles that partially block the streetcar route but tell CHS that there may be a need for signs and markings changes if there are repeat trouble spots.”

Maybe some new signs that say NO PARKING would help.

Will UPS and FedEx still be granted immunity from all parking laws on Broadway?

1. The maps, while omitting key information apparently, also commit a major sin: the map is not oriented in the direction the user is looking at it.

2. Parking on Broadway could be improved if the “thread loops” were released from their bondage and taken away and stored in the what-do-we-do-with-this-stuff-now warehouse. The concept was great in plan but it doesn’t work in execution. Besides being one more thing that drivers have to negotiate on a very crowded street while parking, they are nothing but magnets for tagging and despite the promised “healthy maintenance budget” that I read about many moons ago, they get only worse. I believe it’s time to admit that they concept is failed and to relieve us all from our misery of dealing with them, and their tagged blight. And then, perhaps, drivers parking on Broadway will have a little easier time getting their vehicle into the space and out of the street cars way.

Because there’s one extra vehicle on the street every ten minutes?

Because they are the exact same length as a regular car, expect times 5, and oh hey – they stop every so often and load and unload 10x people where a regular car can fit 4 max, so your snippy comment is spot on? Not.

Thank you. Obviously, the increased congestion will be because of the streetcar stopping to load/unload, which at times can take quite awhile. Meanwhile, the traffic behind will back up. Oh, and add to that is what this article is about….it is inevitable that streetcars will be blocked by poorly parked vehicles….How long will it take for a tow truck to come and clear the vehicle?

I predict that most of the congestion will be caused by cars.

I like the idea of combining ideas 1&2. Hit the car with the train, tow it away, send a bill for repairs to the train, and send a nice fat ticket over too. The drivers of Seattle have gotten even worse over the last few years, and I think a swift kick in the dick might start curing these issues. This person who thought “yeah, that is a good parking job” has probably done this a thousand times.

Gasp! You mean….enforce cause and effect? Good to know it has not become completely extinct to have an awareness of accountability for choices.

While I have no doubt there are a lot of oblivious parkers, trying to decipher what precisely are the rules on Broadway isn’t exactly clear. Add in people who aren’t residents, and it is going to be confusion.

Just have a tow truck at the ready. People will learn quickly.

It would cost quite a bit of money to have a tow truck at the ready 18 hours a day.

Tow companies do a pretty business with the towing charges. If there are a lot of bad parks, it will be worth it for a tow company to be nearby at all times.

There was a solution proposed for this mess on Broadway back when the streetcar was being planned. It was called “put the streetcar on 12th Ave”.

But the Broadway merchants threw a tantrum, and voila, we now are trying to squeeze a bike cycle track, a streetcar, parking and travel lanes all on a relatively narrow street.

yes, because it’s a known fact that nobody ever parks, drives, bikes, etc on 12th ave. it’s an empty street that would serve only the streetcar.

and last time I checked, 12th ave and broadway are about the same sized roads.

Ryan on Summit
Reply to  HuskyDown

I wonder if Seattle was treated to never-ending, ad-nausea bitching & moaning from monorail detractors about what a waste of money, how inefficient, how inflexible, etc it was when the monorail was first built? I never hear that now. Maybe by 53 years from now, the people who were against the streetcar being built will have stopped whining about it, too. If we’re lucky.

1. The monorail isn’t stuck in traffic, or trapped for an hour behind half an inch of poorly-parked Prius bumper.

2. How often do you use the monorail, anyway? Once a year? Once every two years?

At least the monorail is unique. Dozens of U.S. cities have been hopping on this slow-streetcar-to-nowhere trend in the last couple of years, with equally and predictably poor results. Fortunately, this latest trend in non-transportation appears to be on the wane.

In 53 years, the First Hill Streetcar will be in a trash heap somewhere.

It’s called “observing outcomes and learning from errors so as not to repeat them”.

I know — how very un-Seattle.