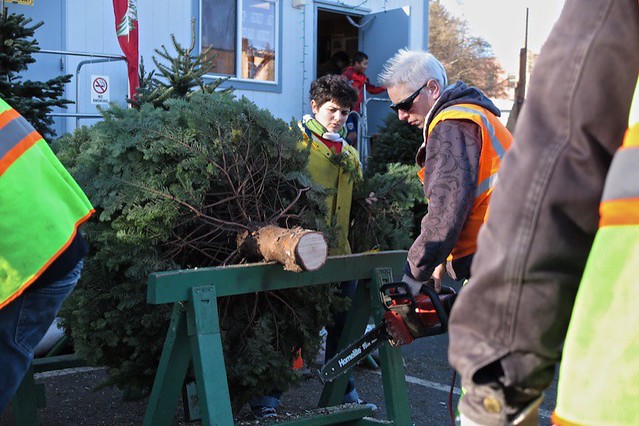 This summer, CHS reported on the search for a new home for Seattle Area Support Groups and Community Center after 26 years at 17th and Thomas for the Capitol Hill nonprofit. SASG announced Monday that, after a successful capital campaign that included a generous $300,000 matching donation, it has signed a 10-year lease on new office space above 15th Ave E.

SASG’s new space will be on the second floor of the building formerly home to the Salal Credit Union at 115 15th Ave E. The announcement did not include information on what is lined up for the first floor of the building that has been empty since Salal moved its branch to First Hill this summer. Last week, CHS reported that the parking lot adjacent the building is destined to be home to a new four-story apartment development.

SASG will have to get creative about where it hosts its annual holiday tree sale fundraiser. This year, the Capitol Hill tradition is lined up to return in the Group Health parking lot behind the 17th Ave house. Sales begin November 27th.

SASG was founded in 1984 as the Seattle AIDS Support Group but has expanded to include groups building communities around specific HIV issues and other recovery assistance like addiction. It held its first tree sale fundraiser in 1990. You can read about more of the SASG history here. The group had been known as the Dunshee House but recently moved away from that identity prior to the announcement of the group’s move.

As for the future of the old house, city permit paperwork still doesn’t indicate any new plans for the property at 17th and Thomas. The house was sold in September for $2.425 million.

You can give to the SASG capital campaign and learn more at sasgcc.org.