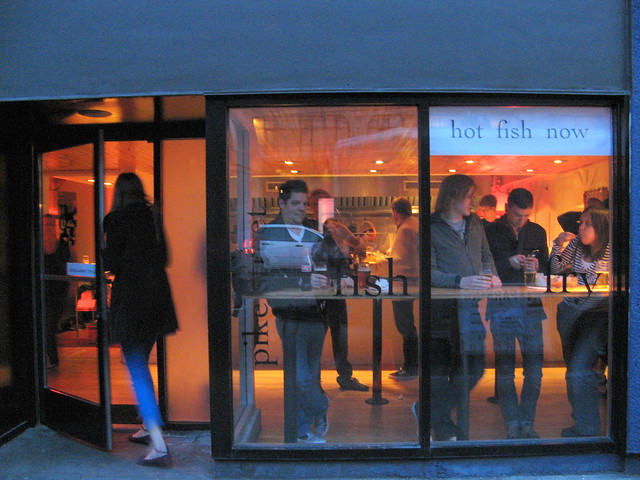 When you come from a large family of successful siblings, expectations are high. Pike Street Fish Fry, the hole in the wall fish and other stuff you can fry and chips place wedged into Neumos and Moe Bar, quietly closed in November.

Its Neumos ownership took a swing at the relentless churn of ongoing development construction on 10th Ave on the way to shutting down the deep fryer for good:

After 2 years of disruption to our business due to massive development in our street, we decided to stop fighting the losses we were incurring  and take this time to temporarily close for a renovation and clean up. We will be using this time to revisit the the concept and space with fresh eyes and ideas with a plan to reopen the space when the construction is done or at least major projects subside.

Pike Street was opened in 2008 by a partnership involving some of the Neumos folks and food and drink “impresario” Michael Hebb and helped usher in a new era of low food brought high in Pike/Pine with local and fresh ingredients and surprisingly artful execution despite a lowbrow setting — the bar at Moe, for example.

Michael Yuasa took over the business in 2009 but we’re not entirely sure how that ended up. The most recent business license lists a corporation including only the Neumos partners. In 2010, Pike Street was lined up to be part of a “little Seattle” strip in New York City but was replaced by a Caffe Vita in the project.

Whatever happens next in the 10th Ave at Pike space, the partners at this point in their careers have plenty of experience opening new food and drink ventures beyond their original Neumos stake. Mike Mekling partnered on the overhaul of 15th Ave E’s The Canterbury, for example, while Jason Lajeunesse’s latest restaurant project is 19th Ave E’s elevated pasta joint Ernest Loves Agnes.

Hebb, in the meantime, remains active in creating new food and drink experiences — including a small roster of “Over Dinner” concepts. Drugs Over Dinner provides “a toolkit to plan, host and moderate a conversation about drugs and addiction,” its website explains.

Neumos, Moe’s, and the subterranean Barboza appear to have survived the “massive development” issues that doomed the small restaurant. In 2014, they celebrated the 20th anniversary of Moe’s Mo’Roc’N Café, “patient zero” in the spread of today’s Pike/Pine’s nightlife culture of music, drinks and good times. The live music and nightlife venue has a lease through 2024.

Brunch coming in December to a brunch-starved part of town @jseattle pic.twitter.com/LeYMg2c52u