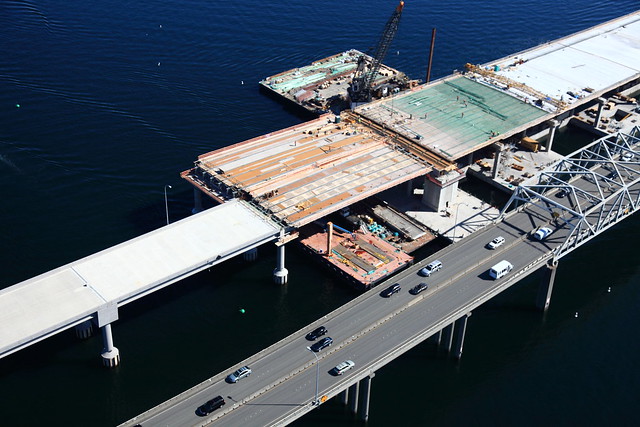 The great Seattle transit spring of 2016 — or, at least, really swell first quarter of the year — is rounding into shape. State officials have announced an April grand opening for the new 520 bridge — the longest floating bridge… in the world:

The public will have the chance to run, bike or simply stroll across the world’s longest floating bridge in April. The Washington State Department of Transportation will host a grand opening celebration to mark the completion of the new State Route 520 floating bridge. The weekend festivities atop the new, 1.5-mile-long floating highway kicks off Saturday morning, April 2, with a community fun run and walk sponsored by the Virginia Mason Heart Institute. On Sunday, April 3, the 520 Go Long celebration closes with a public bicycle ride from the University of Washington, across the bridge and back, through car-free routes of downtown Seattle, and back to the university campus.

Part of the 520 festivities will include a once-in-a-lifetime ride with the Cascade Bicycle Club. Reminder: You’ll have another opportunity to celebrate the new 520 in the future when the full Seattle-side portion of the project is completed.

The April opening of 520 is a little bit off our report from October of planning efforts around the bridge and the March opening of the ahead-of-schedule, under-budget Capitol Hill Station and U-Link extension. A Sound Transit media event Wednesday afternoon at the future Roosevelt station didn’t include an announcement by new CEO Peter Rogoff of an official opening date for the new Broadway station and the 3.1-mile twin tunnels between downtown and Husky Stadium but the agency did confirm the March timeframe. We’d put our money on a Saturday in March if you’re the wagering type.

In the meantime, you can learn more for Sound Transit’s plans for U-District Station at an open house Thursday night. Light rail is expected to reach that portal by 2021:

We don’t know if the final element of the great Seattle public transit spring of 2016 will really stretch into spring but, yes, there is still not an official launch celebration date for the First Hill Streetcar yet, either — though November’s safety day and a recent City of Seattle planning meeting for an event in Pioneer Square indicate we’re (probably?) pretty close.

My guess for Link opening is Mar. 26′ the day before Easter. Lower ridership, some people taking Monsay off, ease into service. I hope it’s earlier, but they aren’t giving me a lot of hope here.

Considering the original timetable called for it open in May, it’s still remarkably ahead of schedule for a project of this magnitude.

On the other hand I’m getting a bit tired of watching, week after week, as the First Hill Street cars roll past me completely empty. And they aren’t even connected to the overhead wires! How long/far can they run on batteries?

Part of the testing is to answer that very question. Once its officially running it should be primarily using the overhead wires.