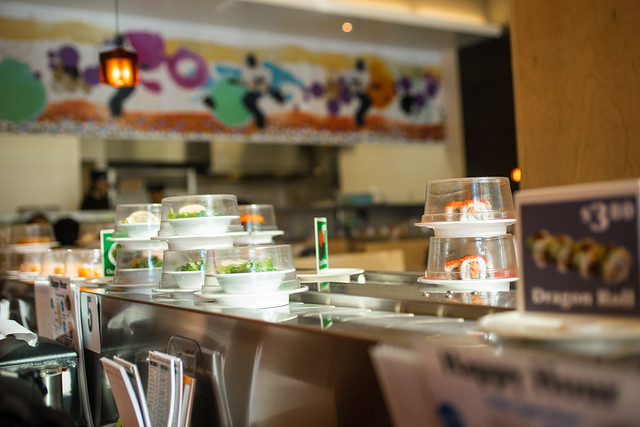 The Broadway Building, a project from a Capitol Hill-based developer across from Seattle Central at the corner of Broadway and Pine, has become an interesting place to watch some of the smaller shifts in the neighborhood’s food and drink economy as the city’s move to a $15 minimum wage plays out.

No word, yet, from the big chain’s corporate bosses on their decision to close the restaurant, but Broadway’s only conveyor belt sushi joint has announced it will close later this month. Genki Sushi, which opened in the Broadway Building five years ago, will close next week.

In its place, CHS has been told a local restaurant is already set to put the kaiten back in motion in the Hunters Capital-owned building.

While management of the Hawaii-based Genki chain with restaurants in the islands, Washington, and California hasn’t yet commented on the closure, the change will be the third transition from a chain or franchise in the building. In November, Ian’s Pizza on the Hill replaced a pizza joint whose owner blamed the city’s treatment of franchises as large chain restaurants for her decision to bail on Broadway.

Seattle’s minimum wage law kicked into high gear in 2016. Starting in January, minimum wage workers at companies with more than 500 employees got a an 18% bump in pay from $11 to $13 an hour. Small business employees were bumped up to a $12 guaranteed minimum, an increase of $1, and those who are tipped now get a $.50 base-pay raise bringing their minimum hourly wage to $10.50.

News of the Genki closure was broadcast by another of the Broadway Building’s new era of tenants. Local player Refresh Frozen Desserts replaced departed fro yo chain Yogurtland in September.

We'll miss our neighbors, Genki Sushi. Thanks for all the yummy lunch breaks! ??? pic.twitter.com/NcWOLVc5B3

Like frozen yogurt and pizza, the departure of the sushi chain now opens a space for an independent — or, at least, non-big chain or non-franchise — entrepreneur to open on Broadway.