Montlake Drive-in Market 1937 and 2016. Old one is a 1937 state assessor’s photo, from the Washington State Archives. Filed under 2200 24th Ave East. The new one I took on a recent cold morning after hiking down through Interlaken Park.

I did it! My 4-month streetcar history vigil forced SDOT to start operating the streetcar. Now that that’s over, let’s talk about some car-oriented architecture at 2200 24th Ave East at Boston Street, where the Boston 2200 building is underway. We’re going to need to talk about pickles and ice cream to get there, and about beer afterwards.

Dear HistoryLink: Please pay someone to write a biography of George Horluck.

There’s not a lot of information about George Horluck out there, but this whole article revolves around him so we’re going to have to take what we can get. Google suggests that we read the History of Horluck Brewing Co and Sick’s [sic] Century Brewery. I did it for you, no need to click. 6/10. Unhealthy obsession with beer. Sprinkling of pre-beer facts with no context. Good effort.

As the page says, George was born in Nebraska to parents newly immigrated to the United States, but they came from Denmark. The family moved to Seattle by 1910.

With a bit more digging in newspaper and genealogy records, George Horluck’s life comes into focus. By 1910 his father Hans was in a partnership with Anton Hagen, selling pickles at the Pike Place Market and Westlake Public Market. Hans transitioned through two other partnerships in the next two years, selling pickles, bacon and pickled herring. (Any future biographer is probably going to stop at this point to scream the same words that sprang from my social network accounts: “Arg, no! Why am I researching the lineage of this pickle stall??”)

From about 1915 to 1916 George sold papers at 1st and Pike, and then delivered a Seattle Times route on Denny Hill. After high school he joined his father’s odd pairing of businesses in Port Orchard: growing and selling feed for farm animals, and operating mosquito fleet steamers. After a decade of hard work, in 1926 George traveled to his parents’ home of Copenhagen and spent a year exploring Europe. (June 30, 1929 Seattle Times page 68.)

He was left deeply impressed by “conditore” (konditorei, conditorei, konditori, etc) that he saw in Copenhagen, Berlin, Stockholm, and other northern European cities. They were cafes that served ice cream, ice cream drinks, sandwiches, and pastries. He returned on the steamship Albert Ballin in 1927, arriving in New York where he was surprised to find successful konditorei there as well. 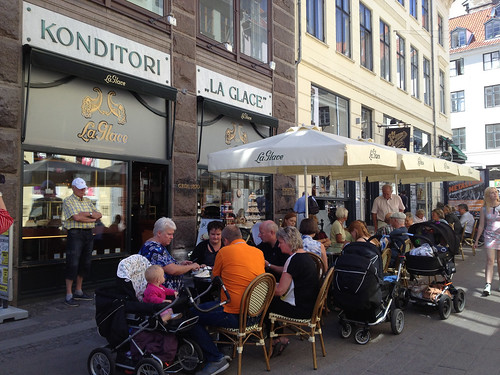 George was determined to open a konditorei in Seattle. His first store was at 2nd and Pike in early 1928. It was so successful that he opened a manufacturing facility on University Street within a few months, visible to the public behind plate glass. I believe it was in the White-Henry-Stuart Building. The stores quickly spread, including a cluster downtown near the markets and department stores on Pike and Pine. Within a year they had twenty stores in Seattle, Tacoma, Bellingham and Bremerton.

George Horluck center top with “GFH” next to him. His father Hans is at the bottom. Cakes and pastries are shown in production. At their one year anniversary, Horluck’s was making 1000 sandwiches and 1000 gallons of ice cream a day. (June 30, 1929 Seattle Times)

After the stock market crash in 1929, George Horluck purchased land at Westlake and Mercer to build an ice cream factory and bakery. He sold to grocery stores, restaurants and other businesses, but he also grew his chain. I know there was a store across from Broadway High School at Broadway and Pine in 1930. I suspect there were more on First Hill and Capitol Hill, because George Horluck lived at the Marlborough Apartments on Boren and University that year. His fiancee Katherine Folsom lived with her parents next to Lake View Cemetery at Federal and Blaine, and after they married in June 1930 they moved briefly to Federal and Prospect, and then down to Broadmoor. He knew the community and had an eye for opportunity.

The other store that I’m sure about opened on Friday, March 13, 1931 in the Montlake Drive-In Public Market. That’s the subject of the article, at long last.

If you’re not reading this, we have to deal with a weird existential crisis about who I am talking to. If you are reading this, you must be wondering “‘Drive-in public market’?? And furthermore, I would like some ice cream.”

Let’s break it down. A public market was like the Pike Place Market or Granville Island. They were smaller in scale, using the ground level of a building to provide space for a number of vendors. They often included a barber, cleaners, and other services along with food. There were a dozen or so in downtown Seattle in the 1920s. There was one on Broadway that I wrote about at length.

A drive-in public market took that concept and moved it to an arterial in the space between residential neighborhoods and downtown, onto cheap land. They often had a tower with beacon to attract the attention of drivers from a distance, an L-shaped building to provide a visible facade to drivers, and a small refueling kiosk. They always had off-street parking with awnings and other elements addressing the parking rather than the sidewalk. It was an odd arrangement at the time, but something that we would call a strip mall. The first was built in Los Angeles in 1925, and they were built for just under a decade. (I wrote more about Seattle’s drive-in markets over on my site since no one else has.)

The drive-in market at Montlake and Boston was developed by George Horluck on his own property, in cooperation with a vendors association. Opening day articles claimed that two more were under planning. He included one of his own konditorei ice cream parlors, and it also had the Montlake Floral Company and Feht meat shop, and other vendors selling a variety of food products.

In July 1931 Horluck sold the building to W. H. Hohag. There are no indications that Horluck or the Producer’s Association continued their plans for building more drive-in markets. By 1937 the grocer was replaced by an independent Red & White store, and Horluck’s kondeterie apparently was gone.

1933 brought a huge change to the business climate of the United States of America. Prohibition ended and there was a sudden scramble to supply a thirsty nation with legal alcohol.

George Horluck had been quietly waiting since 1926 — since he lived in Europe, drinking beer as much as he pleased — to begin brewing beer. He studied at the Danish Academy of Brewing, and slowly built knowledge of how to brew at scale. He quietly turned part of his ice cream factory into a brewery before production was legal. (And, perhaps he brewed alcohol illicitly beforehand?)

When FDR authorized the sale of 3.2% alcohol content beer in March 1933, Horluck rushed to complete a brewery next to his ice creamery on Westlake. “My new enterprise will be known as the Germania Brewery, and it will be financed entirely with my own money, to make beer exclusively for hotel dining rooms and high-class restaurants.” (March 19, 1933 Seattle Times) He had a brewmeister and staff of experienced brewers ready, and he sold product starting in May, shipping as far south as California. As full repeal of Prohibition approached at the end of the year, Horluck quickly expanded his facility even farther, and revealed to the public that although they knew him for his ice cream, he came from “a long line of old country brewers”. His cousin was “head of the immense Tuborg breweries in Denmark.” (November 8, 1933 Seattle Times)

In 1939 George Horluck sold his brewery to his business partners and other investors, so that he could focus on ice cream and enter semi-retirement. Behind the purchase was Emil Sicks, who had revived the Rainier brand and was Seattle’s other major brewer. The Horluck’s beer brand was phased out immediately, replaced by brands like Rheinlander, Century, Sicks 66 and Rainier. Horluck’s ice cream, on the other hand, was available in Seattle grocery stores until the mid-1970s, and revived again in the mid-1980s.

Note: It’s a bit afield, but Rob will be talking about West Seattle’s drive-in market at the High Point Library on March 20 at 2pm. It’s the kickoff of the Southwest Historical Society’s SouthWest Stories series.

Rumination of this article is best paired with a can of Fremont 77, which is currently on sale in area grocery stores. “With this brew we respect Seattle’s old Horluck’s & Sicks Brewing Companies, predecessors of Rainier Brewing.” (Damn, I should have played that for a free case of sponsorship or something. My Jacson Bevens impersonation is even worse than my Kenneth Arthur impersonation… shout out to any fans of Field Gulls and me that got those references. No?… Well, I tell my jokes for me.) (Go ahead and eat a pickle too.)

This is hilarious but also very educational! Thank you for getting into a pickle.