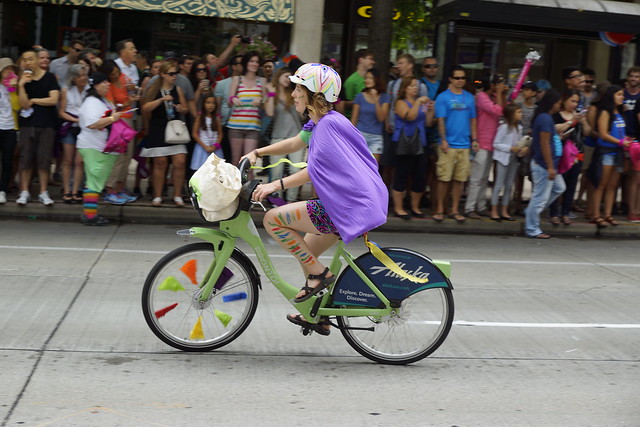 UPDATE 4:10 PM: With a focus on creating a transportation system with a strong element of social equity and a desire to recoup Seattle’s investments to date, of the Seattle City Council’s transportation committee Tuesday afternoon moved forward the plan to acquire and expand Seattle’s bike share system. UPDATE 3/4/2016: Confusion during the voice count has been cleared up and the committee vote now stands 4-2, giving the bill a small boost as it heads to the full council vote.

“We have 3,000 members today already that could transition into the new system,” committee chair Mike O’Brien said. “There’s significant value in that.”

Meanwhile, committee member Rob Johnson cited concerns around equity and Pronto’s relative success in its early period of operation in voting against Lisa Herbold’s substitute bill. The committee vote means the proposed bill will move forward to the full Council for a vote on March 14th.

Herbold’s proposed substitute bill that would have seen Seattle put its bike share solution to rest and put the remaining $4 million earmarked for expansion into bike infrastructure around the city was roundly defeated in the committee vote. Following, a compromise plan to allow for a new bikeshare system in 2017 with some City involvement from Tim Burgess was also voted down. The committee is slated to vote on the takeover in this session.

In a poll of CHS readers, while the vast majority of all respondents ranked the Herbold plan as their top choice, among Pronto riders, the “Kubly solution” of acquiring the bike share ranked highest:

Original Report: Just as it seemed City Council members were ready to advance a $5 million plan to acquire and expand Seattle’s indebted bike share system, District 1 rep and transportation committee alternate Lisa Herbold is pumping the brakes. Members of the transportation committee were set to vote a plan Tuesday that would have the City acquire Pronto in a $1.4 million buyout from its current nonprofit owner, using the remaining $3.6 million to fund a service area expansion in 2017 that officials say will breath new life and equity into the system.Take the CHS Bike Share Survey

But during Monday’s City Council meeting, Herbold said she is introducing an alternate plan: Withhold the $1.4 million, use it to pay off Pronto’s $1 million federal loan, and use the remaining $4 million approved last year for bike share expansion to “support other bicycle and pedestrian projects.” Herbold’s preference would be for any future bike share system to be run without any public assistance.

“I believe bike sharing can be a productive part of Seattle’s transportation network,” she writes. “However, I believe we would be best served by a privately owned and operated system, in the same way as Car2Go, the successful car-sharing program, is privately owned and operated in Seattle. Cities such as New York City, San Francisco, and Miami Beach each have wholly privately-owned bike share systems.”

UPDATE: Council member Tim Burgess has a Pronto plan, too. The at-large representative announced Tuesday that he would also vote against a public take-over of Pronto, but will propose a compromise plan to allow for a new bikeshare system in 2017 with some City involvement. While Burgess would let Pronto go insolvent and use $1 million to pay back its federal loan, he would reserve the remaining $4 million “to support a future public-private partnership for bike share that does not rely on City of Seattle funding for operating revenue and jointly shares responsibility for capital expenses.”

In Seattle, car sharing has expanded this year with a new service from BMW joining the fleet of Car2Go vehicles around the city. A fleet of DriveNow’s all-electric BMW i3s are now available in the city as free-floating share vehicles.

But even car sharing’s expansion in Seattle hasn’t always been a smooth ride. An important factor in planning a bike share system is affordability and equity. It wasn’t until last March that Car2Go finally expanded its service coverage to all of Seattle. Meanwhile, city governments are looking at ways to make services like Zipcar more affordable to lower-income drivers.

Acknowledging that the Seattle Department of Transportation is solidly in favor of a public takeover of the bike share, Herbold raised another just a little bit coldly calculated idea: Allow Pronto to go insolvent at the end of March in order to strengthen the City’s bargaining position. “This could dramatically reduce the cost to the public to acquire the bankrupted company’s assets,” Herbold said in a statement.

Late last year, CHS reported on the City’s plans to take over Pronto to stabilize an underused system, expand it to more of the city, and transform the fleet into a new generation of electric bikes. SDOT officials believe an all-electric bike system can be a game changer in terms of boosting ridership and would allow more riders to make the longer trips required through less dense areas.

But details of the system’s financial failures have emerged. Above average overhead costs due to Seattle’s unique third-party owner system combined with insufficient funds raised at the launch of service put Pronto $1.2 million in debt, according to SDOT. Without a City bailout, Pronto will cease operations on March 31st.

By spending $1.4 million, the City would immediately acquire 26 stations from Pronto as well as all remaining hard assets (the City already owns 28 stations after purchasing them with a federal grant). The City would also seek out a new operating contract as Pronto’s current contract with the company Motivate ends at the end of 2016. Motivate could still submit a bid to continue running the service.

Council member Mike O’Brien delayed a vote in February so members could take more time to study the issue. Council members also asked SDOT to return Tuesday with some additional information, including the City’s draft contracts to purchase Pronto from its current nonprofit owner Puget Sound Bike Share and to continue using Motivate as the bike share operator through 2016.

Previous planning called for Pronto to expand to cover all of Capitol Hill to 23rd Ave, much of the Central District, parts of south Seattle, the U-District, and Green Lake. SDOT predicts trips could nearly quadruple under the expansion:

The Seattle Bike Blog recently took a look at different expansion configurations to show how the Pronto could transform into a robust public bike system by going bigger.

Negotiating new sponsorship deals would be key to expanding and sustaining the system in the future, according SDOT’s head of active transportation Nicole Freedman. SDOT projects it could get roughly $1,200 per new bike in advertising, which would put the system on track to being financially sustainable. Acquiring the system without expanding it would cost the City roughly $110,000 a year after 2016.

Re-locating existing stations could also give Pronto a boost after the City takes over, according to SDOT. Officials have recommended the following targets:

To ensure a Pronto expansion would serve a wider swath of riders, SDOT is proposing to locate at least 20% of its new stations in low income areas and starting a low-income membership program.

Supporting Pronto or expanding the current system without taking it over is not an option, according SDOT, and declining to bail out Pronto would still come at a price. It would cost the City $25,000 to decommission the system and $200,000 to remove it altogether.

25 thoughts on “City Council may decide killing Pronto is best way to save bike sharing in Seattle — UPDATE: Pronto not dead yet”