The Pickwick on Boren at Union, c1980 and 2016. Looks occupied still, with a resident on the chair on the lower porch (Stephen Cysewski and Rob Ketcherside)

Some of my blended old and new photographs are more subtle than others. For this month, I started with Stephen Cysewski’s great photo of the west side of Boren between Union and Pike (undated, but around 1980), and then tried to figure out which interesting half to blank out with the terrible looking Avanti building or the Homewood Suites hotel at the end of the block. In the end I chose to include very little of today.

When they were demolished, these buildings were known from left to right as the Knickerbocker, Pickwick, and Thayer apartments. The Knickerbocker was built in 1905. The Thayer was built as the Donaldson, named after its 1906 builders Robert and Charles Donaldson. Just off frame were more apartments, the Berquest to the north built by Edwin Berquest in 1909, and the Lawton around the corner on Union built in 1905. Apartment buildings hugged the slope that led up to First Hill’s spread out mansions.

The Pickwick Hotel, center, was built in 1904 under the rather ridiculous name The Puritan. It would be fun to think of a worse name for rental housing. Maybe the Spartan? The Ascetic? The Detached House? A few years later H. L. Mencken described Puritanism as “The haunting fear that someone, somewhere, may be happy.” Who would want to live in a building with such an aura?

So it’s no surprise that when sold in 1905, the building’s name was changed. But the inspiration for the new name, The Firmere, is also a mystery. It’s apparently Latin, meaning something like “firms [up]”. Not great ad copy. Weird even.

The Pickwick had 42 units crammed into its three-story frame, a large number for a boarding house. It had a shared dining area with catered meals that brought residents into a “nice, homelike” atmosphere. Over the years advertisements described various attractive features: “hot and cold water”; “furnished”; “every modern convenience; marine view, large verandas”; door buzzers and telephones; and later, “TV”. The 1910 census showed it housed a wide variety of professionals: a real estate salesman, two stenographers, three Seattle school teachers, an auto mechanic, a magazine journalist, a draftsman, a department store saleswoman, a theater manager and the staff of the hotel itself. The share of single female residents working in offices increased by 1920, and they remained a major portion of renters through the 1940 census at least.

The Karns family managed the hotel from the 1910s to the 1930s. Their daughter, Elaine Karns (Feek) made news in a beauty pageant in 1921, and later in life created beautiful handmade Christmas ornaments that were sold at Frederick & Nelson during the 1960s and 1970s. Elaine passed away in 1992, not long after The Pickwick itself.

For its part, the Pickwick continued as a large, successful “family” or “residential” hotel through the 1960s. By 1970, though, it had fallen into the hands of Archie Katz and Herman Ginsberg, who let the building fall apart and ignored city inspector orders to make improvements for fire safety. Sometime after 1975 the Pickwick was vacated. In 1982 squatters started a fire that was put out, but it happened again in 1984 and this time it raged out of control.

The buildings on Boren had gone vacant as the real estate company CHG assembled properties around the planned Washington State Convention Center. They held 10 buildings within a block of the site, all low-income housing. The eviction of residents, long vacancy, and eventual demolition of these buildings were blows to renters in Seattle, part of a narrative that deserves more attention. Along with development across downtown, in First Hill, and in other nearby neighborhoods there was a serious low-income housing crisis. For a glimpse, check out the history timeline at the Tenant’s Union.

In 1987 another major fire broke out. The block still lay mostly empty, waiting for the apartment and hotel project connected with the convention center to proceed. The building north of Pickwick, the Thayer, had a 35-year tenured grocery store at ground level but otherwise was occupied only by squatters. One of them started a fire, which “raced through the the old wood-and-brick building, blasting windows out of their frames.” Another squatter alerted the grocery store owner, who escaped unharmed. One firefighter, Robert Earhart, died as the department struggled to stop the fire after it jumped to the abandoned apartment to the north, the Berquest. Even as the case against the arsonist proceeded, another fire started at the Thayer in November 1987. Fire department officials said it was the fourth blaze since the Thayer was vacated in 1983. Squatters continued to enter the buildings nightly, despite attempts to keep them out.

The Pickwick and its neighbors’ story ended with demolition and the 1990 construction of Avanti Apartments and the Plaza Park Hotel, now Hilton’s Homewood Suites. To put it nicely, the new buildings are architecturally uninspired. The variety and character of the old housing was lost to a big, boxy, functional, bland, monotonous, homogeneous investment.

Not every building on the block was lost though. At the north end of the block was the 1880s Ward house. It was already a declared city landmark: dilapidated but obviously salvageable and worth saving. Historic Seattle stepped in and brokered its sale to lawyer David Leen who moved it up to Belmont and Denny. It remains there today, one of Seattle’s oldest buildings. 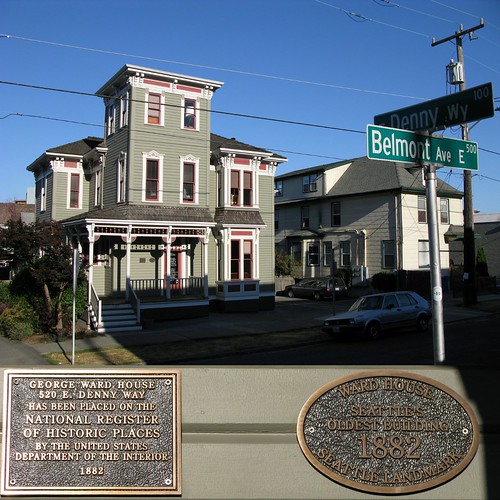 Still, the story has troubling parallels to our struggles today. A landmark was disregarded as an annoyance by an uncaring developer. Useful buildings became a blight, left derelict in spite of a low-income housing crisis. In turn these buildings became a health and safety threat to first responders as squatters took them over. 30 years later we find ourselves in a similar set of crises: unable to provide reasonably priced shelter, unable to protect our city’s landmarks, dissatisfied with our inability to control bad acting developers.

What do we change now to make things better in the short run, and to make Seattle a better place 30 years down the line?

17 thoughts on “CHS Re:Take | The lost community of Boren”