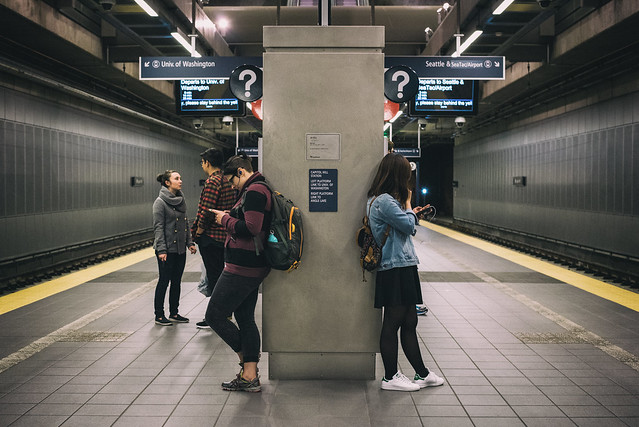 By our count, the anecdotes of excitement around the opening of Capitol Hill Station and the U-Link light rail extension are off the charts. By the first solid ridership counts, that excitement is fully justified.

Sound Transit announced this week that its first estimates for U-Link ridership have set new records for Seattle subway traffic:

Sound Transit said Friday, April 8th marked a new highpoint for its light rail service with more than 72,000 estimated riders. An estimated 71,500 rode the train on February 5, 2014 to be part of the Seahawks Super Bowl victory parade. You can credit the Mariners home opener and Emerald City Comicon for the new record, by the way.

In the most recent official ridership tally available, light rail boardings were up nearly 13% vs 2015 (Image: Sound Transit)

Ridership on the new line connecting downtown to UW Station by way of Broadway has been ahead of Sound Transit planning from the first trains. After only a few days of service, the agency decided to press more trains into service to better meet rider demand during peak hours. Metro’s long-planned realignment of bus routes to better coordinate with the new line is also in place. Work is also afoot to create safer pedestrian access to Capitol Hill Station. Late night light rail service? Probably not happening soon. But you will be able to vote on funding for the next big Sound Transit projects with ST3 later this year — *if* Tim Eyman doesn’t screw it up.

As for the numbers, the Seattle Transit Blog is impressed:

Average weekday ridership is up a whopping 61%, from 36,000 in the weeks before ULink to 58,000 today. Saturday ridership has nearly doubled and is approaching weekday levels, with Opening Day (March 19) and the 520 Bridge Opening ceremonies (April 2) leading the way, but with the other two Saturdays near 50,000 as well. Sunday ridership looks to be settling near 30,000, growth of nearly 50%.

In less measurable news, a few outlets have picked up the “business is booming on Broadway angle” based on mostly flimsy anecdotes. CHS will look at the issue from a more empirical angle soon. We reported earlier on the mixed feelings many business owners admit to as they watch change accelerate on Broadway and worry about rising rents and displacement just as the street picks up.

Meanwhile, we’re not sure if it has cleared up yet, but we didn’t get a lot of details back from Sound Transit when we asked about a steady flow of water leaking into an area of Capitol Hill Station. Thanks to Gordon for the video. “Operations staff say the station contractor is working to address the leak,” CHS was told last week. It’s OK, Sound Transit. Nobody’s perfect.

You can check out the full Sound Transit announcement on its ridership estimates here.

Thank God we’re not focused on aggressively expanding the system within the city.

We need to focus on hour long trips to Tacoma and Paine Field, and subsidize free parking lots so wealthy suburbanites can quickly and cheaply commute into the city.

as much as I want transit in Belltown and Ballard, I wouldn’t call Tacoma and Paine Field wealthy.