Beset by manufacturing problems and delayed launch dates, the First Hill Streetcar continues to face technical difficulties in its fourth month of operation.

The latest complication has prevented the Seattle Department of Transportation from tracking daily ridership on the 10 stop streetcar line. According to an SDOT spokesperson, the streetcar’s automated passenger counters are collecting data, but there is no way for the department to access it — the information is not making its way to the software system set up to read it. 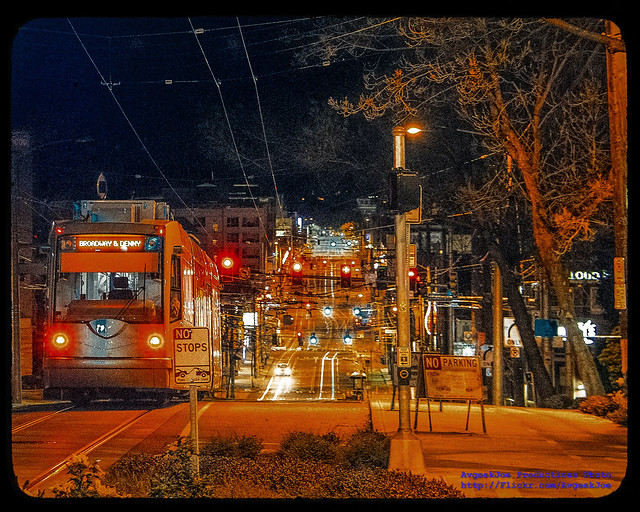 For now, the department has a few other ways to measure things. In March, SDOT calculated 50,159 rides from ORCA Card taps — roughly 1,618 rides per day. But even with a complete daily count, it would be unclear how ridership was meeting expectations. It turns out, SDOT has no projections for how the streetcar should have performed that month. In fact, SDOT’s only ridership forecast or goals come from a 2010 Sound Transit study (PDF) that projected ridership would reach 3,000 to 3,500 daily passengers by 2030.

The Seattle Transit Blog, meanwhile, reports on progress for the City Center Connector portion of the city’s planned streetcar network while also casting a skeptical eye on the lack of visibility for the First Hill line.

To help expose the streetcar to more riders, SDOT has teamed up with neighborhood organizations to offer free rides during three Thursdays in May.

Free Ride Thursdays kicks off this week with a celebration of Capitol Hill’s two Broadway stops. The Capitol Hill Chamber of Commerce will be hosting an evening of interactive art and performances at the neighborhood’s stops at Denny Way and E Pine to coincide with the Capitol Hill Art Walk.

The E Pike and Broadway stop will feature live performances. Just Sage shares theatrical comedic magic under the guise of one of his most popular characters, Winston Winthrop. Streetshowkeith performs juggling, feats of dexterity, and prestitidigitation: a spectacle of crowd interaction. Poet William Curtis writes poems on a topic of your choice. Contortionist clown Vega Bonita specializes in ribbon dances, bendy balancing, and confetti kisses.

Urban Artworks will also be hosting a paint-by-numbers mural open to the public.

The mystery of the streetcar’s ridership trends don’t mean much for the day to day of the new line but it does come in start contrast to the launch of light rail on Capitol Hill. Sound Transit’s Link Light Rail is hitting record ridership numbers with help from the line’s recent expansion to Capitol Hill and the U-District. Average weekday ridership was nearing 60,000 daily riders in the weeks following the March opening of the two-stop, 3.1 mile line. Along the way, Sound Transit officials boosted service during peak hours.

As for the streetcar, the SDOT spokesperson tells CHS the department is actively working to address the issue with the light sensor counter system.