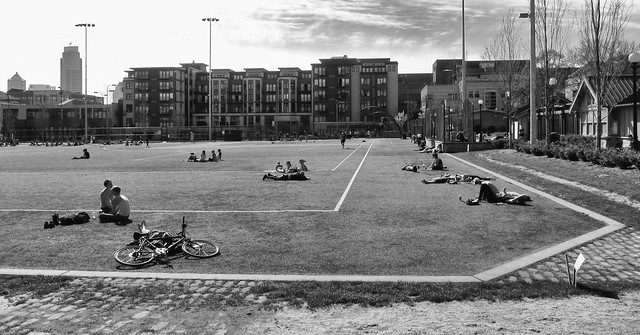 Capitol Hill’s sunbathing center — and a popular sports field for youth teams, adult leagues, pick-up, and the occasional prom dress rugby match — will get a playing surface this summer underlaid with a new test replacement for the maligned “crumb rubber” used to pad artificial turf fields around the world:

The project is located at Bobby Morris Playfield – a part of Cal Anderson Park in the Capital Hill neighborhood. The project consists of the following elements of work but is not limited to: Removal and disposal of existing infilled synthetic turf surface and replacement with a new synthetic turf system consisting of a 25mm paved-in-place elastic layer and 2.25” fiber length FieldTurf Classic synthetic turf with PureFill (1.7lb/sf Cork and 4.5lb/sf sand infill. Project will also require provision of inlaid baseball, softball and soccer markings and installation and maintenance of temporary erosion and sedimentation controls.

The $1 million project is going out to bid now with plans to quickly put a contractor in place for the six to seven week project to rip away the existing coverage in Bobby Morris and install the new turf and cork and sand infill. Seattle Parks officials plan to have the new turf in place by mid-July. In the meantime, you’ll see Bobby Morris fenced off and closed once the work begins.

UPDATE: The work comes at busy time for the park. Seattle PrideFest is slated for June 25th in Cal Anderson with Trans* Pride taking place in and around the park on Friday, June 24th. We’re checking to see if organizers are aware of the turf work schedule.

Crumb rubber fields have come under increasing scrutiny over health concerns that the recycled tires used as infill could be contaminating the fields. Three federal agencies are now studying whether the crumb rubber fields are exposing people to dangerous chemicals. The move by Seattle Parks to find an alternative is a proactive effort to get ahead of the concerns.

“We hope that it’s just as playable and durable and meets safety requirements,” project manager Jay Rood tells CHS about the alternative being tried at Bobby Morris for the first time in Seattle. If the new cork and sand fill works out, Rood said the pilot program will be extended to artificial turf fields across the city, the workhorses of the parks system providing millions of hours of public use by Rood’s estimation.

Rood said Seattle Parks also looked at alternatives involving material like coconut husks, a mineral-like sand, and a synthetic material but ultimately went with the new cork product after visits from several manufacturers who visited Seattle to pitch their creations. While Parks wants to find a dependable alternative, new health concerns aren’t driving the schedule to upgrade to Bobby Morris. The current turf was installed a decade ago and is overdue for replacement, Rood said.

Lighter in color and form, the cork fill could also have a side benefit perfect for the warm evening hangout that Bobby Morris becomes every spring and summer. Rood said the new fill is nice for soccer, etc. — but it also should be more comfortable to sit on.

I play pick up soccer here all the time, glad to see the rubber tire crumbs go, hopefully on the new turf, when I go to ground I won’t scrape off a third of the skin on my legs like I do now.

The project is located at Bobby Morris Playfield – a part of Cal Anderson Park in the Capital Hill neighborhood.

It’s neat that there is another neighborhood that has a park named exactly like ours is!

Hopefully the new turf will be resilient to bodily fluids… :-o