I don’t particularly like going to the bank. I suppose there aren’t many of us who do, being that it’s a place where one’s monetary shortcomings are in full view and relative strangers make compulsory – and sometimes shockingly invasive – small talk while you perform mathematical magical thinking right in front of their eyes. Exiting a financial institution recently, and mired in my own apocalyptic calculations of my personal – and by stress-induced extrapolation, intrinsic – worth, I had a fleeting conversation with the most gorgeous woman who reached for the door at the very same moment, and from her I unexpectedly received one of the best pieces of advice anyone has ever given me. 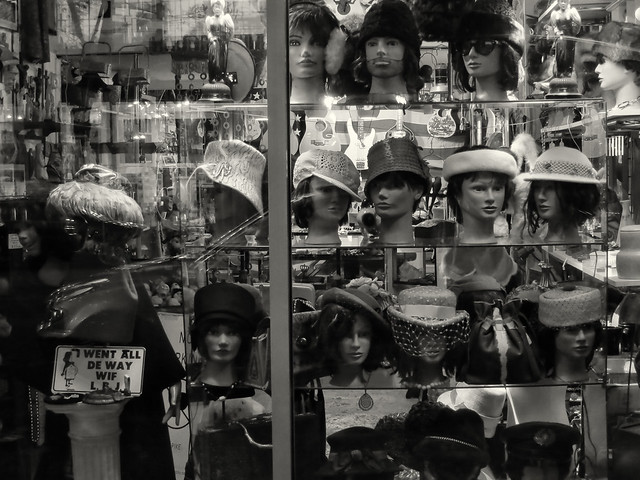 It happened that she was dressed entirely in layers of plain but startlingly beautiful fabrics that flowed over her as though she was an animated marble sculpture from some wholly other era. She was, indeed, quite a number of decades older than me, and yet walking as quickly as I was. I wondered if perhaps she was just as eager to be getting out of that place.  I held the door open for her, and as she passed by I was struck by how perfectly her gigantic woven hat was situated upon her head, and how regally she carried it above the rest of her ethereal ensemble.

She was so stunning; I’m pretty sure I sounded like a star struck teenager as I complimented her on the hat, saying that I wished I was a person who could pull off wearing something like that.  I have never been able to manage hats. They make me self-conscious, they make my head itch, and even in the coldest of winters I am the idiot who has nothing on her head. And probably also has no socks on. Or gloves, or even long sleeves.  I’ve joked forever to friends that I must have been a starfish in another life because I seem to hate having my points covered.

Anyway, she laughed and responded by saying “Of course you could wear a hat! Anyone can wear one. The key is that you have to just set it up top of your head and then don’t mess with it. Just leave it. Don’t fuss. And then don’t look in the mirror – just go about your day.”

Imagine. Going about your day – even just one single day – without fussing or looking into any kind of mirror. The reflective actual kind, the sinister and addictive and warped-like-a-funhouse-mirror social media kind, the variety born of intimate relationships that can be alternately velvety-soft-adoring and then relentlessly-searchlight-harsh, or even just the internal self-assessing kind in which our own personal images can vacillate between polar extremes faster than our hearts even beat.

I wish I could put into words the way that this woman’s face radiated something other – something way stronger – than joy, and was at the same time lined by a history that could not possibly have been absent of all the same afflictions of doubt, fear, heartbreak and every other agony a lifetime guarantees. I only walked alongside her for about 45 seconds, and yet her self-assurance took my breath away, as did the triumphant solidity of her life force.

I am not presuming that she was somehow so other-worldly that she was free of the very human temptation to consider how she measures up to others, or even how she might have met/exceeded/fallen short of her expectations of herself and her hopes for her own life. And I am certainly not suggesting that self-reflection and endeavoring to be a better – or even just a decent – person are not laudable and important pursuits.

But something about the way she spoke to me made me feel like she wasn’t wasting any of her time here in this life worrying about what anyone else thought of her, or how her life compared to anyone else’s. I can’t, obviously, know anything at all about her internal world; I don’t even know her name.  And yet, somehow, I did not get the sense that she questioned her intrinsic worth.  And it made so happy. Enough to want to wrap it up in something and give it to you.

We’ve asked Karyn Schwartz, owner of the Sugarpill apothecary on E Pine, to contribute to CHS about health and Hill living on a semi-regular basis. If you’re an expert and want to share with the community in a recurring CHS column, we’d like to hear from you.