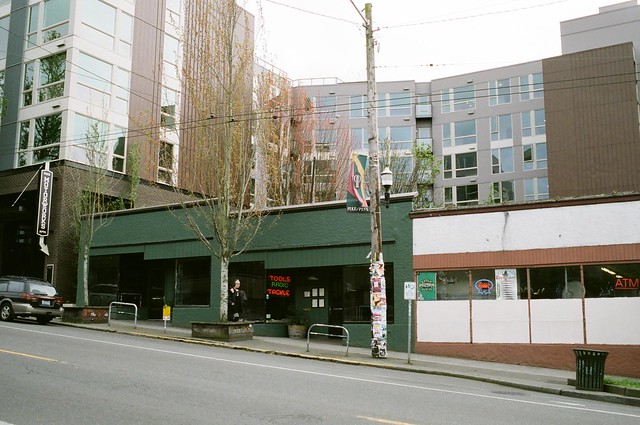 The numbers from an online rental site claim Seattle’s rents jumped 11% this month compared to May 2015. Our last serious look in March revealed a continued rise despite a flood of new units coming into the market on Capitol Hill. Our quick and dirty sampling method shows about a 3% jump this May compared to May 2015 for 1BR and studio units. The only thing the various analyses of Seattle’s rents and affordability seem to agree on is the numbers keep rising.

Here’s what they’re saying San Francisco, Seattle’s “Ghost of Christmas Future” model city: From A guy just transcribed 30 years of for-rent ads. Here’s what it taught us about housing prices

This is as close as you’re ever likely to see to an answer to life, the universe and everything.

It’s all summarized in the formula at the top of the chart. If you gave me values for (1), (2) and (3) above, then I could predict to you with startling accuracy how much the median two-bedroom apartment in San Francisco will cost to rent in that situation.

The “guy” posted here about his findings:

Seattle’s proposed housing levy is set up to help boost the creation of 20,000 new affordable units in the city in the next decade. But sounds like we might need a few new “un-affordable” ones, too — to the tune of several thousand:

Instead, I’m going to close with a lesson for cities that are adding jobs and/or wealth faster than homes but are not yet San Francisco: Portland, Seattle, Austin, Denver, Minneapolis. Maybe Oakland and Los Angeles and San Diego and DC still, too. For the love of god, keep adding homes. Keep adding homes so things don’t get any worse and you’re not trapped in a lose-lose-lose shitstorm like San Francisco.