Hungry fans get served at the 60th anniversary party in 2013 (Image: CHS)

Come September, you can hand over your credit or debit card when that Broadway gutter punk asks for a few bucks to help “put Dick’s in my mouth.”

The famously all-cash Seattle Dick’s Drive-in chain is set to add the ability to pay by card starting in September:

After 62 years of accepting only cash, Dick’s Drive-In will also be accepting credit and debit cards at all locations by September 2016. soon to accept

CHS talked to a Dick’s rep about the decision and changes at the Broadway outlet of the six location chain. The days of Dick’s cashiers magically tallying your fuzzily delivered order of 5 Deluxes, 4 fries, and 6 chocolate milkshakes have been gone since Dick’s added a new point of sales system so the basic ordering experience won’t change. But Dick’s wants its customers to keep pitching into the drive-in’s Change/Round Up for Charity program which has collected around $1.4 million for local nonprofits since it was started in 1998. “A Deluxe, fries, a shake, and Round Up,” the Dick’s rep suggested for your new standard order in the drive-in’s payment card future.

In 2013, Dick’s celebrated 60 years of business with a Broadway street party featuring Sir Mix-a-Lot. The fast food joint draws crowds from lunch time to closing time even as the block is redeveloped around the drive-in and neighborhood food and drink options grow. Now that Dick’s has made the great leap to accepting credit cards, perhaps another of its anachronisms will fade away — at least on Broadway.

How much longer can it make financial sense to make room for a drive-in across from one of the busiest subway stops in Seattle? 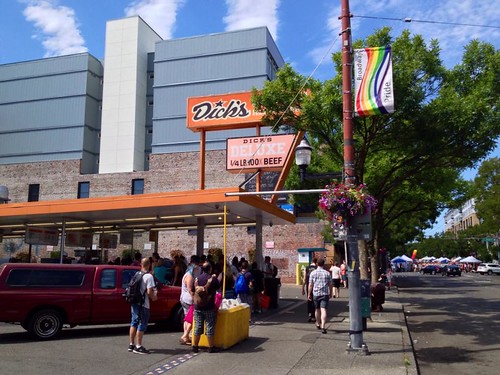 Bad idea. How many times have you cooled your heels in line at Starbucks while the person in front of you takes five minutes to pay for her three buck order with a credit card?

Credit can actually be faster in many circumstances. Its proven card swipes and phone scans are quicker than counting cash and change. Unless, the merchant requires receipt printing and signatures. Starbucks doesn’t for most transactions making credit quicker. Hopefully Dicks won’t either.

Do you mean homeless?

I’m surprised the writer hasn’t been tared and feathered by now!

They already started. I used my card there, on Broadway, a week ago.

yup, this was posted in August