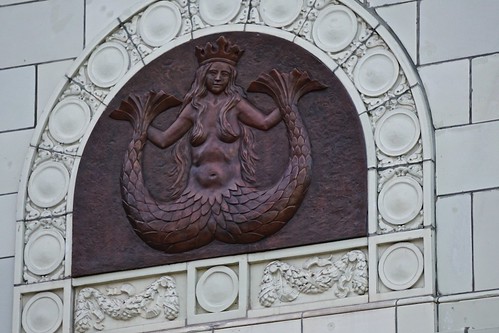 We look ahead in Capitol Hill food+drink from time to time but it’s pretty unusual for CHS to find a new project in motion when there is little more than a construction pit. Coffee giant Starbucks does things differently — CHS has learned the company is planning a new cafe across the street from the Capitol Hill Station light rail and development site.

Plans are in motion for a Broadway-facing cafe in the six-story apartment building just beginning construction at Broadway and Denny. The corner was the longtime home of the US Post Office before the feds moved their snail mail operation up the street. Demolition revealed the corner’s auto row past. It now has a caffeinated future.

Rendering of the planned building

We’ve asked the company for more information about the project and their early activity on a corner that is still mostly dirt and will update when we hear back. UPDATE: The typically friendly and responsive media folks at Starbucks HQ were again friendly and responsive but don’t have much to say about the project at this point. “We don’t have any details on this site available right now but will ask around and come back to you as soon as we have something to share,” a rep writes. Thanks, coffee giant!

Once built, the project will move the official Starbucks counter to three along Broadway from Pike to Roy — four if you count Roy Street as a Starbucks, six if you count the counters inside the QFCs. The global coffee giant has been investing in its standard brand cafes with upgrades at a few of the old school Hill locations joining the company’s wave of indie-styled experiments that popped up around the neighborhood. In 2013, the company took over the one-time Broadway State Bank building from struggling chain Tully’s. Meanwhile, a different corner of Broadway and Denny was once home to a Peet’s Coffee before the chain shuttered its shop in 2012. We’ve heard rumors over the years that Peet’s planned to return once Capitol Hill Station was complete.

The plans also won’t do much to assure Broadway small business owners who have feared increasing demand with the opening of Capitol Hill Station will bring increasing rents.

We don’t yet know what recipe Starbucks will be deploying in its latest Capitol Hill investment. It’s unlikely to be one of the company’s “premium” plays — that energy on the Hill is focused at the Reserve Roastery on Melrose which opened in late 2014.

As for the war for caffeine business serving the thousands of riders at Capitol Hill Station, little Honor Coffee will get the jump on Starbucks when it opens soon in the former fro-yo space near Broadway and E Olive Way. The building Starbucks will be part of at Denny and Broadway likely won’t be completed until late 2017.