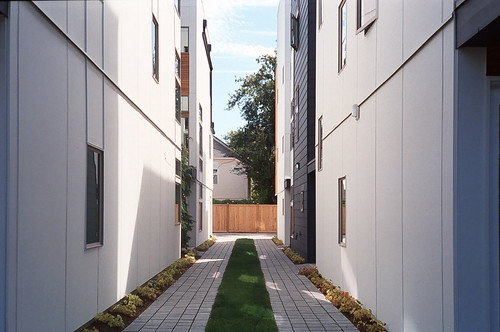 With even more competing interests than on Capitol Hill, the effort to forge a new pro-affordability zoning scheme for the Central District has resulted in quite a complex map.

Earlier, CHS looked at Capitol Hill’s portion of the 15% of Seattle slated to be re-zoned to allow for taller buildings as part of Mayor Ed Murray’s Housing Affordability and Livability Agenda.

The Central District is poised for even more transformation.

Most of the affected zones throughout the city (Central District included) would get the standard “HALA bump” — a one story increase in allowable building height along with new “mandatory housing affordability” requirements for all new residential construction. As part of Seattle’s “Grand Bargain,” MHA will link the creation of affordable housing with market-rate development by requiring all new multifamily buildings to make 5-11% of their units affordable or require developers to pay into an affordable housing fund.

In the draft HALA maps, city planners used the letter “M” to denote several things: where MHA requirements would apply, the relative leap in zoning, and how much affordable housing developers would need to build or fund. Here’s how it breaks down:

Starting near 23rd and E Pine, there are several blocks of single family zones that are slated to become new low-rise zones (hatched lines indicate more significant up zones), allowing for medium-sized apartment projects. A 15-foot building height allowance would be added in the parcels adjacent to Madison Ave.

The parcels around 23rd and E Union are poised for a more significant upzone, although it is worth noting all the recent development prior to MHA taking effect. The Uncle Ike’s property and Midtown Center property would get a baseline height boost from four to seven stories.

A chunk of low-rise blocks around 16th and Marion would be subject to MHA requirements, but would receive no significant zoning changes.

Most of the blocks at and around 23rd and E Cherry would keep the same zoning type while getting the standard extra story of allowable building height, with one exception. The parcel currently home to ALTSpace just east of 23rd and E Union would transition from a low-rise to neighborhood commercial zone and come with an M1 level of affordability requirement.

Chief among the HALA principles is that denser housing should be built around major transit centers. With a light rail station on track to open at I-90 between Rainier Ave and 23rd Ave by 2023, city planners have proposed a smattering of up zones around Judkins Park. Many blocks of single family home zones would transform to low-rise zones with M1 affordability requirements.

An expansion to the area’s urban village would capture properties directly around I-90 and a handful of blocks north of the freeway between 24th Ave and 27th Ave.

Outside of a few parcels, there are no zoning changes planned for area east of MLK Way between Union and Jackson.

As we reported Monday, Mayor Murray recently announced that new developments in the Central District would be required to include an even higher level of affordable housing than initially announced, though those changes are not reflected in the current maps.

Under the update, the high-MHA geographic area has been expanded to include the Central Area and some areas of Capitol Hill. Developers of new projects in these areas would be required to make 7 to 11% of their units affordable to those at or below 60% AMI.

City officials plan to hold five community meetings to gather public feedback on the maps. You can also take a closer look at the maps and submit feedback at hala.consider.it

Bryan, thanks for this follow up post on this. I am very curious about the extension of LR1 zones north to Pine (at least) between 21st & 25th. This is a change from the previous HALA proposal last year (http://www.capitolhillseattle.com/2015/07/upzone-the-central-district-23rd-ave-action-plan-calls-for-65-feet-at-union-85-at-jackson/) and the only notable one I can see for this area.

That is a HUGE change for those blocks farther away from the corner of 23rd & Union. And it’s especially curious given that EVERYTHING to the south of Union had limited (or no change) as did the slice from 19th to 21st between Union & Pine. For example, this would allow an apartment project amidst all SF homes at 25th & Pine (2 full blocks from either 23rd or Union) but not one 100 ft from Union north or south on 20th (i.e. by Chucks). That is beyond strange. Any idea how one can find out why they made this change from the 2015 draft or why the inequity above?

The map is a total mess. The city has succeeded in making this way too complicated.

I’d also note that Madison-Miller should be in line for its own upzone since the city seems dead-set on BRT down Madison. They’d be better off just doing it now as a package, rather than waiting two or three years to upzone and expand the urban village boundary. I’m guessing SDOT would rather enjoy its semi-peaceful BRT outreach rather than remind people that there are policy implications for transit investments.

Yes, please build housing for people, but not in my Capitol Hill

Matt – not sure if your reply is to me, but ….
I’ve actively supported upzoning & related changes around 23rd & Union for years (more than a decade). I don’t necessarily oppose the specific changes I mentioned. That said ..
1) these specific changes were not included (or even hinted at) in the initial HALA draft or the 23rd Ave plan both of which I reviewed last year. Additionally these areas NE & NW of 23rd & Union are the only spots (I believe) in the area that were changed towards multi-family zoning from the earlier draft. So yes, I’d like to find out why & what that will mean.
2) it’s inconsistent with the goals of the 23rd & Union plan and more importantly inconsistent with zoning in the rest of the neighborhood. i.e. it is the ONLY spot east of 19th where LR1 zoning extends more than a 1/2 block in from Union. So this would allow for a LR apt building
– 2 blocks north of Union 25th Ave amidst all SF homes, but
– NOT 100 feet south of Union on 25th Ave (next to Stencil bldg. & new burger joint), or
– NOT 100 feet north or south of Union on 20th Ave (5 blocks closer to Capitol Hill w/ it’s comparative density
How does that make sense?
I don’t think it does & I suspect it in fact reflects some NIMBY oriented efforts by other blocks around 23rd & Union. I support increased density & hence housing. That is happening in dramatic fashion around 23rd & Union, which is great. I’d just like it to be equitable — not just for me, but for the natural & rational incremental growth of the urban village around 23rd & Union.

Is this the Capitol Hill plan for the CD? I have to admit to just not sure what to say after noting that a listing at 19th and 18th and Spring indicated that the locations were in Capitol Hill with the real estate agent insisting that the CD is much further south. By the way I think this area has been meeting and surpassing past goals. Upzoning by itself will not = affordable.

adding to get comments

Almost every single listing in this area (Cherry Hill) and even deeper into the CD is listed by real estate agenst as being in the heart of Capitol Hill. This includes AirBnB listings as well. It sickens me. I regularly call the number for this listing agents and let them this racially motivated description is not appreciated and fraudulent. I suggest you do the same. We need to call these agents and let them know it’s not going unnoticed. @jseattle this would make a great story. Please expose these liars. We are proud of our neighborhood.