UPDATE 12/3/2016 4:20 PM: Thousands of women — and those who love them — gathered in Volunteer Park Saturday afternoon for a march against hate organized to counter a tide of misogyny and stand up against efforts to roll back women’s rights under the incoming Trump administration. Here are a few glimpses from the crowd and images from CHS for the day’s rally and procession from Volunteer Park to Cal Anderson via 12th Ave and Broadway.

Police estimated between 3,000 and 4,000 marchers participated.

“When we see bigotry and when we see discrimination, we need to have the courage, the strength, and the passion to denounce it,” organizer Kelsey Coleman said as she addressed the crowd waiting in Volunteer Park before the start of the march. “And to show people of all ethnicities, all orientations, all genders, and all religions that we stand beside them.”

An idea first hatched by a group of friends with a start a little more than a Facebook invite, organizers said Saturday’s event grew under its own power as women sought a local opportunity to speak out against the outcome of the election. Demi Wetzel told CHS she and the other organizers were overwhelmed by the outpouring of support, offers of help, and media interest in the event.

Chants during the march rattled off buildings on the chilly afternoon. My body, my choice. Black lives matter. Not my president.

More images from the day, below. We’ve also posted more pictures on the CHS Facebook page. 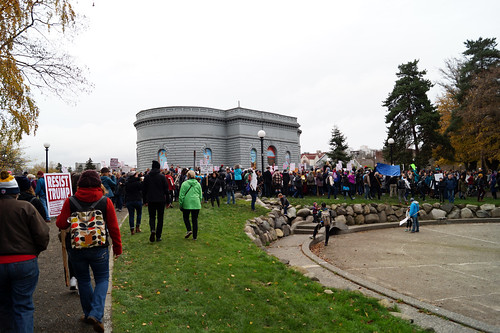 Original report: In the wake of the 2016 presidential election, it’s a little more difficult to trust the numbers. Still, thousands of people say they plan to attend a rally and march Saturday from Volunteer Park to Cal Anderson.

The Seattle Women March Against Hate appears to have struck a nerve.

Organizers Demi Wetzel told CHS the event was created with little more than an idea of standing up against a tide of ugliness following the declaration of victory by Donald Trump.

“Though I originally started the FB event page on a whim, the community has since stepped up and helped organize right alongside myself,” Wetzel said. “My inbox is currently flooded with people offering their help and guidance.”

“We must stand together to show the world that misogyny, misogynoir, racism, xenophobia, transmisogyny, transphobia, and hate of any kind is not welcome in this city,” organizers write. “Together we can show the world that women will not be bullied by anyone—not even the next president.”

This sign from a November rally in Cal Anderson Park will fit right in this Saturday (Image: CHS)

If that’s not enough love for you, there is also something called the Capitol Hill Happiness Sprinkling taking place on Broadway around the same time.

The rally and march starts at 1:00 PM at the Volunteer Park amphitheater stage. Dress warmly — it’s expected to be a chilly weekend.

We will be there!

Thanks so much for posting about this! When I scheduled the Happiness Sprinkling I had no idea about March. Excited to see this, though!! How awesome it will be to cross paths!