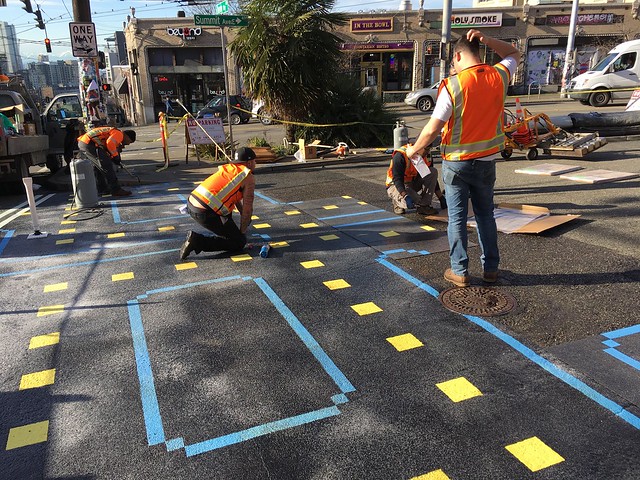 A stretch of relatively dry winter days means any ghosts wandering around E Olive Way had better be on the lookout. A Seattle Department of Transportation crew has been at work installing the area’s latest pavement park, a now Pac-Man-themed stretch of street on a small section of Summit Ave E between E Denny Way and E Olive Way.

The new maze mural also includes plastic bollards to block off the street. We’re checking with SDOT for details on any other design elements to come. The old Pronto bike share station formerly at the site was long ago removed — we won’t be needing those soon, anyhow. UPDATE: SDOT traffic engineer Dongho Chang, operator of maybe the single best city employee Twitter feed IN THE WORLD, tells CHS that planters will also soon be added “for more greenery and protection.”

That short segment of Summit in front of an apartment building, Ghost Gallery (Pac-Man’s favorite Capitol Hill art boutique), and a mini-market currently serves as both parking space and through street, and that has been the problem according to SDOT. The old configuration presented an opportunity for drivers to cross Denny onto Summit and nose into traffic on E Olive Way rather than to turn at the four-way intersection. The intersection also created some ambiguity for pedestrians something the walkable but blocked-off street is hoped to help alleviate. Now we just need to sort out which venue has the closest Pac-Man or Ms. Pac-Man arcade machine. And a stack of quarters.

The Summit project is one of a handful of the $70,000 Pavement to Parks projects underway across the city. The city’s first pilot projects in the program can be found on First Hill around the three-way intersection of University, Union and Boylston and at 9th Ave.

Holy cow! So to get sidewalks and potholes fixed to you have to pay directly? I’m asking since tax dollars seem to go elsewhere.

The average budget for a pavement park is $70K per project. The average block face of sidewalk costs $300,000. These are not the droids you are looking for.

On top of that, this is a safety project, reducing the number of intersections where a vehicle collision could occur, and increasing the neighborhood’s share of open space (scarce west of Broadway) in the process!

Take it up with the Lander bridge please.

Love it! We need more fun and quirky things in this city.

We’re cutting down trees all over, but we’ll distract people with colored pavement. So quirky!

No reason there can’t be trees in that location in the long term. Pocket parks make the city a more vibrant and liveable space

And vibrant! So vibrant! Important urban fact: Collisions between tiny particles called quirks and vibrans form most of the oxygen we breathe.

Plus, very good for eye health. Everyone’s looking down at their phone, but really should give their eyes a break and focus beyond the screen occasionally. Now there’s something else to look at when looking down, and you don’t have to deal with looking up (SO AWKWARD).

I was tired of seeing people driving up Olive making a quick right then left through this intersection to avoid waiting a few moments for the light to turn. I love the whimsy!

And to think, we could have had plants.

Perhaps we could pay Pac-Man $70,000 to roam around the neighborhood gobbling up all the litter? Seems like we have run out of enough ‘youth’ to do the job according to the WAC.
http://dor.wa.gov/content/findtaxesandrates/othertaxes/tax_litter.aspx

Seattle: Where everything is a binary choice. “If you make Pac Man art, you can’t pick up litter or plant trees or repair roads.”

Seriously, look at the city budget some day. Everything is broken out into categories with specific funding levels. They don’t grab money from the pothole fund to pay for Pac Men or Pac Women.

I think the idea being that there shouldn’t be a Pac Man fund when we clearly don’t have the money to keep up with standard street maintenance. For example, three blocks away from this installation, in the inexplicably perpetual construction zone of Harrison, between Summit and Belmont, the road is a disaster.

While the installation is great and fun, it does seem rather frivolous when you consider how that money could have been spent on legitimate projects to clean up the neighborhood.

The true cost of something is what you give up to get it. In this case, we have a pac-man park. What did we give up to get it? I’m not sure really, but I’ll tell you this. We probably gave up a cleaner street, better technology for our kids in schools, an extra bus route, and so on. Every single dollar that the city spends came from we the people, and I’m all for fun things, but not at the expense of much more needed things. This is just one example of waste this city seems to come up with on a daily basis.