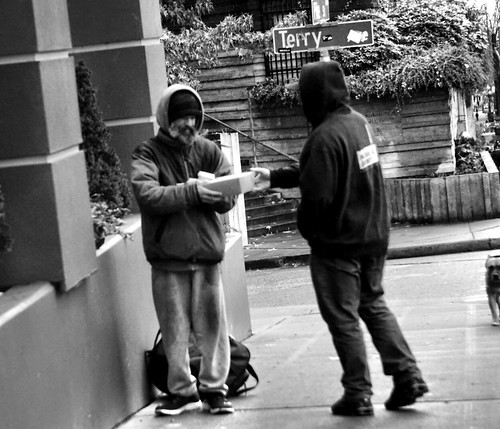 A plan that is part humanitarian, part legal rear end covering is moving forward to formalize how the City of Seattle responds to homeless encampments in public areas where camping is not allowed.

This week, the mayor’s office released proposals for the clean-up rules and is asking for public comment:

In 2016, Mayor Murray formed a Task Force on Unsanctioned Encampment Cleanup Protocols to make recommendations on changing the encampment removal rules. In October 2016, he announced the Bridging the Gap to Pathways Home plan. This plan increases short-term support to people living without homes while longer-term strategies are reorganized. A part of the Bridging the Gap plan is rewriting the rules for removing encampments. Compared to the existing rules, the new rules:

The City is soliciting public comment on the proposed rules through Wednesday, Feb. 15. Interested parties may send their comments to:

Under existing rules tents and camps are supposedly to be immediately removed. Removals can take place even if there are no shelter alternatives available, and there are few guidelines to prioritize which sites should be cleared. Under the new proposals, campers would be given a minimum of a 72-hour notice of removal and must be offered available shelter. The rule proposals also lay out a specific criteria for removal, storage of property, and inspection of encampments.

“We have a crisis that we need to address. … We have 3,000 people in the city of Seattle who are sleeping in cars, sleeping in doorways, sleeping in tents outside. Unacceptable,” George Scarola, director of homelessness for the mayor’s office, said in January about the scope of the problem in Seattle. Last week, a new approach to counting the city and county’s unsheltered people surveyed the area in a study that will be released this spring. Seattle and tech boom cities like San Francisco continue to struggle with thousands of homeless people. “We did not plan to grow affordably, which is why we’re in this crisis,” Mayor Ed Murray said in an appearance with San Francisco Mayor Ed Lee at Seattle U in January.

In the meantime, Seattle Public Utilities has also begun cleaning up trash at three locations under litter abatement pilots: in Little Saigon, Chinatown and Ballard. The plan is to add four new neighborhoods to the program. Those locations will be chosen based on where the most complaints of garbage are, coupled with where a need is seen. Officials also plan to add new needle drop-off boxes throughout Seattle

The new encampment removal proposals are available below in PDF format:

Public comment on the proposals is due by February 15th.

The best way to become a better public speaker is through practice. In this workshop, taught by Gin Hammond, all students will have opportunities to do just that in a safe and supportive atmosphere. Through games, exercises, and discussions, you’ll … Continue reading →
View Calendar