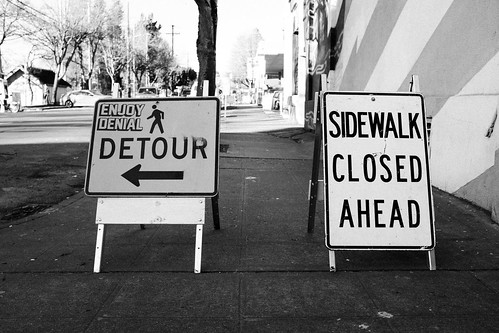 On Thursday night, a small group of Capitol Hill denizens gathered in a fourth floor classroom at Seattle Central College to mull over project ideas submitted to the city’s Your Voice, Your Choice neighborhood grant process. The 20 or so participants split up into two groups, representing north and south, to rate the 42 publicly solicited proposals for District 3, narrowed down from 134-plus.

The projects were assessed by two criteria: need and community benefit.

It was an informal exercise in face-to-face, block-to-block, small-bore civic engagement. The groups briskly discussed each proposal, jotting down their scores. In attendance were Seattle Central professors and students, local apartment dwellers, and planning-savvy wonks like Ryan Packer, senior editor of The Urbanist, whose name tag sticker read, appropriately, “Ryan The Urbanist.”

Many of them had shown up to shepherd their own proposals on to the next level, or to grumble about conditions in their corner of the neighborhood to anyone who’d listen. One elderly woman who lives in the Tuscany building at 1215 Seneca, bemoaned the new construction going up next door that will eventually block her view: “Nobody told me about it! Why didn’t I get a vote?” Personal stakes were pitted against broader concerns: of a proposed pedestrian improvement to the intersection of Belmont and Summit one attendee noted, “I’m gonna rate this a ‘nine’ because I live right there.”

Impending development was a running theme, and several of the proposals were dispatched with a common refrain: “Isn’t that gonna be redeveloped very soon anyways?” “They’re already in the process of changing over that whole block.” On a suggested crossing improvement at Seneca and Minor: “Swedish [Hospital] will fix it at some point.”

The project ideas contained an array of urban traffic mitigation and pedestrian safety features, from speed bumps to crosswalks to flashing beacons. Curb bulbs, those curved extensions that project out into an intersection to reduce crossing distance and calm traffic, were a popular prospect. Installations of flashing beacons at various locations were weighed judiciously on site-specific merits, and one proposal to situate them at E Olive Way and Boylston Ave E got a few chuckles by pointing out, “Seattleites like to wear black.”

The practice of stationing bright orange pedestrian crossing flags at perilous crossings was questioned. “Are those even proven to work?” someone asked, to no one in particular. (The answer, according to a study by the city of Berkeley, is no: “The use of the flags did not have a noticeable effect upon driver behavior.” The study also drily noted that the flags are often stolen, incurring replacement costs: “Many of those who picked up the flags used them for purposes other than for which they were intended.”)

A pair of wheelchair users enthusiastically approved of a proposal to repair the sidewalk on Summit between Madison and Spring where tree roots have created large bumps. “I’ve been thrown out of my chair there,” said a woman, “I’ve put in several ‘Find It, Fix Its’ and it’s not being ‘finded’ or ‘fixed.” A gentleman in a wheelchair concurred: “Anytime a sidewalk needs a repair, that’s a ‘9’ for me.”

After about an hour, the meeting began to wind down and the crowd of citizen-budgeters thinned out to a small cluster of diehards as a representative from the Department of Neighborhoods gathered up city-issued iPads and stacks of papers. The assortment of proposals will be narrowed down to a field of eight to ten deemed feasible by SDOT and the Parks Department, and funding for the winners will be included in next year’s budget. There will be two more project development meetups for District 3 before the finalists are determined: March 19 at the 2100 Building and March 20 at Langston Hughes. The top projects will go to a vote online and at in-person voting stations throughout the city from June 16 to July 16.