When Diana Adams opened Vermillion she wanted it to feel like an art opening every night. People always have fun at openings, she reasoned, but the rest of the time they don’t necessarily feel comfortable in galleries. She formulated a simple philosophy: “If you give people freedom to express themselves and treat them with respect, they will come up with the most amazing shit,” she says.

This month, Vermillion celebrates ten years as an insurgent hive of creativity and booze on Capitol Hill. The front space is devoted to visual art exhibits and a random assortment of arcade games. In the back, on any given night you’ll find a wide range of cultural happenings, from poetry readings to socialist slide talks to musical performances. It’s a hub for local hiphop emcees, DJs, and jazz musicians, a haven for visual artists operating outside the “cool kids” clique, and a last bastion of stubborn independence in a sea of velvet-roped meat markets catering to the bridge-and-tunnel crowd.

Vermillion’s continued survival on a shoestring budget seems miraculous in the face of the market forces bearing down on one of the city’s densest and most rapidly gentrifying neighborhoods. Adams has a surprising explanation.

“My place has been subsidized by customers who come over on the weekends from the Eastside to get way drunk and crazy,” she says, “The art is subsidized by bros, basically. It’s my favorite ironic twist to this whole situation.”

Vermillion has its roots in Adams’s previous foray into Capitol Hill art-bar entrepreneurship — Aftermath Gallery on 12th and Spring, in the space currently occupied by Canon. After she was priced out of that location, she discovered her current space, a former thrift shop on 11th near Pike, and began building it out in 2006. She served as general contractor, cobbling together equipment from Craigslist and leaning on subcontractor friends to pitch in their spare time and leftover materials—parts of the back room are constructed out of wood from the bowling alleys of Leilani Lanes, demolished in 2005.

“I remember turning those lights on and looking at that room and saying, ‘Oh my god, I’ve created this sanctuary for culture,’” she says, “Breathtaking, really. I had no idea that it was gonna become what it is.”

After a few years in business, Adams got turned on to the local emerging hiphop scene by rapper-producer Alex “Wizdumb” Hupp, a manager at Vermillion and Adams’s significant other. The back room has become a seminal stage for local hiphop and jazz. Legendary rappers and musicians sometimes stop in to connect with the low-key vibe and small, accessible audiences. When asked to name a few visiting superstars, Adams says, “I don’t drop those names.”

Adams has lived in Seattle for 26 years. Before she got into the art bar biz she worked as a freelance photographer, covering live music for publications including the Stranger and Spin and going on tour with big acts like Beck. Adams exercises a light touch in curating the art that’s shown at Vermillion, which she credits with setting the Woo Girl-resistant vibe for which Vermillion has come to be known. “Art is a filter,” Adams says, “And it’s the kind of filter I want to have. It gets you to a place where you can deduce the truth—you can know where somebody stands or how they react. I don’t judge people or their art at all. I try to be incredibly neutral because it’s all subjective.”

The work shown at Vermillion ranges widely, from the satirical wheat paste posters of John Criscitello to the self-taught street paintings of Daryl Ary to a fundraiser for the Standing Rock protests featuring the photos of Kelly O and CHS’s own Alex Garland. 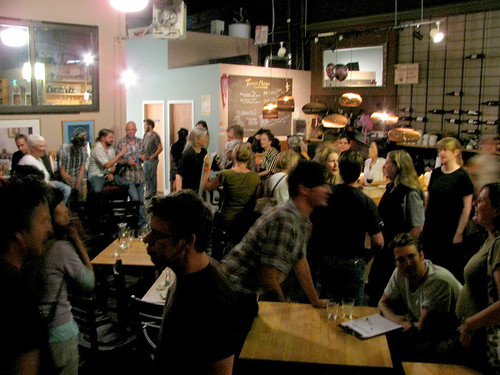 Adams’s original intention for the space was to show art and serve only wine — the name “Vermillion” refers to the color of both paint and vino. “Unfortunately [vermillion] is made out of mercury oxide, which is fatal,” she quips.

Adams has a bleak sense of humor, a bemused resignation that can only come from being a small business owner with a front row seat to the crisis of homelessness and vast wealth inequity that’s steamrolled the neighborhood. Her tolerance for the horrors of urban living and her compassion for the disenfranchised come from her personal experience of loved ones living through challenges; her mother is narcoleptic and her father has experienced periods of homelessness and mental illness. She currently shares a studio apartment with her father and began serving as his primary caretaker after he suffered a stroke.

Back when Adams opened Vermillion it didn’t seem like such a novel idea to set up a scrappy art bar in an old building on Capitol Hill. Ten years later, as the neighborhood around it is completely transformed and new businesses open up on lucrative real estate leveraged to the hilt from day one, Vermillion has emerged as a holdout from scruffier times — a vibrant anachronism. And it has begun to be recognized as such: last year Vermillion was nominated for a Mayor’s Arts Award. Recently a museum director pulled her aside at an opening and said, “I love what you’re doing! I hope you’ve been documenting all of it.”

The bar back when it got its full liquor license in 2010 (Image: CHS)

Adams downplays Vermillion’s local cultural significance and unlikely persistence, partly out of extreme modesty and partly from the sheer exhaustion of running a bar with strained resources in Seattle’s most hectic nightlife corridor. One gets the sense that if Vermillion closed tomorrow she would breathe a sigh of relief and take a very long nap. “I had no idea I had this kind of stamina,” she says. Adams can relate to the struggles of her neighbors and the artists who fill her space, because it’s her struggle, too. “The less I have to give the more generous I am, because the less I have to lose. It helps me stay grounded.”

After a decade of ever-changing art shows and performances and an endless stream of drunks, dancers, and demimondes, Adams’s memories are scattered. Her documentation of Vermillion’s ten years in existence is spotty — the hard drive with her original business plan died a couple years after opening. What she remembers most is the bold, impractical feeling of advocating for art and artists in the face of increasingly insurmountable odds.

“I love it when I sell a piece of art,” she says, “I can almost remember every single one of those transactions, because when somebody buys art there’s a look in their eyes that’s fiendish. I definitely understand the thrill: committing to something that’s beautiful and going for it, taking that leap. It’s fulfilling.”

Vermillion is located at 1508 11th Ave. You can learn more at vermillionseattle.com.