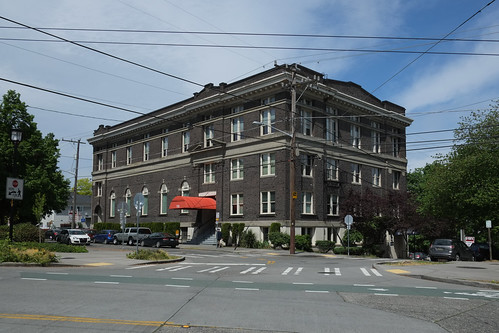 Depending on how you look at it, there is another historic Capitol Hill-area building lined up for sad destruction — or to be part of much needed redevelopment.

The Knights of Columbus, Seattle Council 676 will meet next week to hear Grand Knight Tom Joyce discuss one of the biggest decisions in the group’s 116 years as “a fraternal order of men dedicated in our Catholic faith” — the multi-million dollar decision to sell the Knights’ 106-year-old masonry building at the corner of Harvard and Union.

“As you are aware, the Knights of Columbus Club of Seattle (which is the Council’s funding source and owner of the building and adjacent property) has made the difficult decision to sell its property after a lengthy review process,” Grand Knight Joyce writes in the most recent club newsletter.

The club will vote on a resolution approving the sale at a meeting next week:

UPDATE: A representative for the club tells CHS that their Grand Knight can’t comment on the sale plan at this time.

As part of the sale process, the Knights have already decided what to do with the proceeds of the three-story building and its 15,000-square-foot surface parking lot on Harvard in the area connecting Capitol Hill to First Hill. In April, the council vote unanimously “to contribute substantially all of the property sale proceeds and any other Club assets to a new and separate 501(c)(3) charitable organization” intended to “manage the contributed funds and the earnings to use them to financially assist other charitable or religious organizations which pursue worthy causes.”

“This will allow the Knights to not only continue our primary mission of charity, but to greatly expand our ability to make a significant difference in helping important causes,” Joyce writes.

While in the early half of the 20th century, the Knights were known for their beliefs in fraternity and equality, the modern incarnations of the clubs have taken on less tolerant positions:

In 2008, the Knights was the single-largest funder of Proposition 8, which eliminated recognition of same-sex marriages in California and has been struck down by two federal courts as violating the constitutional rights of gays and lesbians. In 2012, the Knights and its local councils contributed nearly $1 million to unsuccessfully oppose same-sex relationships in state ballot measures in Maine, Maryland, Minnesota and Washington.

We will check in with the 676 Knights to ask more about their future charity and giving efforts.

Today, there are no development plans lined up for the soon to be listed property, according to City of Seattle permits. Whatever its future, the property likely faces a landmarks review. Here is how the property’s history is described in the City of Seattle’s survey of historical site:

The Knights of Columbus, the Catholic Church’s largest lay organization, is a fraternal order founded in 1882 to support church programs and serve charitable causes. The Seattle council was chartered in 1902 and constructed this building in 1913 as the local headquarters. It has played major role both among Catholic and in the larger community, as the site of notable lunches, dances and other events. The gym and swimming pool in the basement were used by servicemen during World War II. The building looks much as it originally did, except for the replacement of some windows on the main façade. The main entry originally had an elegant metal and glass canopy that has been replaced by a fabric awning.

“This is a substantial three-story building, clad with clinker brick,” the survey entry reads. “There is a deep dentillated cornice of cast stone at the top of the building, with another cornice below the third-floor windows.” According to the city, the 1912-built brick and stone building has not been reinforced to modern seismic standards.

According to tax records, the building property has a taxable land value of nearly $2.5 million while the parking lot on Harvard weighs in with a hefty $3.9 million total. The E Union parking lot the group also owns is worth around $750,000. We’ll check in on which of the parking lots — or both — are slated to be part of the sale. UPDATE: We’re told the plan would be to include all of the parking lot parcels in the sale — a potential $6 million in land alone.

Over the years, the building has hosted the club as well as athletic activities and countless weddings, celebrations, and, yes, wakes.