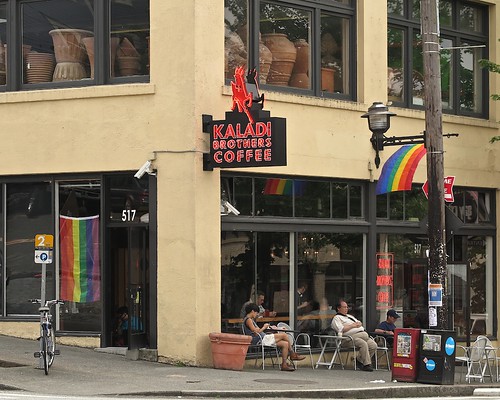 Capitol Hill’s Kaladi Brothers is going back to its roots but the change won’t mean you have to head way up north to visit the Alaskan-born chain’s E Pike outpost.

Later this summer, the popular coffee shop will move back to where it began its life in Seattle — a few doors down in a part of the same auto row-era building being overhauled from Sun Liquor’s shuttered mini-bottling operation into a new cafe and community space.

“I’m super excited because the flow of the current cafe, there’s certain things that are a little disjointed,” Erika Zumwalt, manager of the Kaladi location, said. “People will come in and kind of look around and say ‘Oh! Gonna go somewhere else,’” Zumwalt said.

Plans for the new Kaladi include more seating, better flow, and a sidewalk cafe

Zumwalt said the move’s “new flow” is key with more room for customers and, according to plans, even new coworking space upstairs.

The change will possibly also free up more room for Gay City. The nonprofit neighbored Kaladi in its first E Pike incarnation from 2007 to 2012. That year, building owner Chip Ragen overhauled his property — the old building was part of what was once intended to be The Michigan, a project that would have been the tallest building in Pike/Pine — to provide a new expanded home for both Kaladi and the growing Gay City complex.

Now Kaladi is moving back on its own. A Gay City representative said the nonprofit has “no comment at this time” regarding plans for the space when Kaladi moves out.

The new space will feature approximately twice the seating of the current Kaladi Brothers location and, like it current corner location, large windows that look out onto the street and give the room ample natural light. Additionally, the new coffee shop is also planned to include a more robust sidewalk cafe area with seating amid the hustle and bustle of E Pike. Meanwhile, the look and feel of the shop will remain similar.

The former home where Kaladi made its first expansion outside of Alaska became available again last year as Sun Liquor Distillery moved off Capitol Hill due in part to the challenging logistics of making booze in the dense neighborhood. Sun had been using the space on the south side of Pike as a bottling facility for its contract to supply “minis” to Alaska Airlines. There have been major changes to the block since Kaladi last called the 511 E Pike address home. Next door, the 8-story Dunn Automotive building has risen with hopes of setting the standard for Pike/Pine preservation projects. Tavolata Capitol Hill opened in the building in 2016.

The shift in space should be swift for Kaladi Brothers Coffee. It plans to be fully moved into the new location in early August, and should only be closed one day or so during the moving process before officially changing locations. With this move, Kaladi Brothers will also be getting new equipment, so transferring tons of items between the locations won’t be necessary. That being said, the two spaces are connected underground, easing the relocation.

Kaladi Brothers is planned to open at 511 E Pike in August. You can learn more at kaladi.com.