@jseattle moved back after 5 years away from Capitol Hill, now there are definitely rabbits… pic.twitter.com/6aNVEsdzjj

Has anyone else noticed the sudden appearance of rabbits on the Hill? Growing up in Seattle, I can’t recall many rabbits sightings. There were a few at Discovery Park, and there was the infamous colony in a rocky warren in Lower Woodland. Other sizable green spaces have rabbits as well, but it always seemed likely that the Hill and the rest of central Seattle wasn’t suitable. Turns out I was wrong.

Feral, domesticated rabbits are not unusual in cities overall. Often people assume they are easy pets, and disown them upon discovering otherwise. They hop about for awhile and I assume, are dispatched by cars or coyotes. But the bunnies we’re seeing aren’t domesticated, they’re eastern cottontail rabbits (Sylvilagus floridanus), and they’re suddenly everywhere. The real question is why?

Eastern cottontails were first introduced to Washington in the 1930s as a game animal. Western Washington lacked a native lagomorph (the rabbit, hare, and pika family) at low elevation before this. Back then, if you wanted to see a rabbit, you’d have had to travel to Eastern Washington for one of several species or into the mountains to see snowshoe hares.

There may not be an absolute answer as to why the Hill (and the rest of urban Western Washington) seems to have an influx of eastern cottontails. However, we have clue in their biology. Have you ever heard the phrase, “breeding like rabbits?” Rabbits are truly prolific.

The breeding season for a cottontail is from around February to September. Female cottontails are polyestrus, which means they can have multiple litters in a year, in fact, up to seven ( but averaging more like three or four). In said litters, there can be close to twelve kits, though the average is more like five. So, even a moderately fertile mother could have 20 kits in a year. Adding to the mix is the fact that rabbits are reproductively mature after a couple months. Nearly 25% of the young each year are brought forth by juveniles only a few months old, (only a small percentage of them jump right into it though). This adds up quickly.

Knowing that this is a species capable of fast reproduction, I feel like the answer to this riddle isn’t really that rabbits were never here. Maybe they weren’t around in large numbers, and maybe they weren’t on the Hill much or at all. I do doubt they’ve suddenly appeared out of nowhere. I know there’s long been a population between Husky Stadium and the Center for Urban Horticulture at UW. It wouldn’t be that hard for a few rabbits to steal across the Montlake Bridge at night. 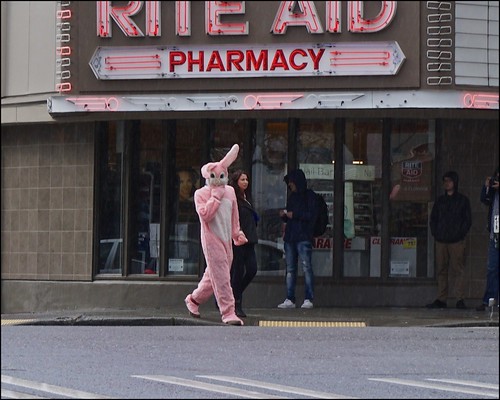 Being reproductively capable is advantageous when you live off food sources that are ephemeral. There’s always greens for a rabbit in the Pacific Northwest, but just possibly, this spring was a particularly good season and the rabbits responded. Despite what Cliff Mass says, I don’t think predators are slacking on their jobs either; (on a side note, a friend who is a falconer and regularly hunts rabbits, confirmed that she’s seen a lot more around Western Washington in the past year). Populations ebb and flow, particularly those of small mammals. This may have just been an expansion year. I’ll be curious to see what happens in future years.

What I do know is that the cottontails — being herbivorous, and being introduced — aren’t always welcome visitors. People are protective of their gardens, and for good reason. I always refer to the Washington Department of Fish and Wildlife’s, Living with Wildlife website when conflicts occur, because typically there’s plenty to do before lethal action (that being said, introduced herbivores are pretty hard on native flora). And, if you are feeling like rabbits might be a new urban foraging menu item, do yourself a favor and look up tularemia. It just might not be worth it!