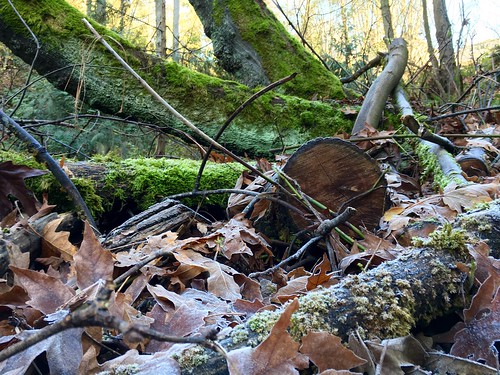 I haven’t seen frost in quite a while. And yet, even if we don’t get much snow on the Hill, I know every winter I can count on some frost. Mundane? Well, you may or may not know that there are several kinds of frost, brought on by a variety of conditions. Frost is fascinating.

You mostly know when to expect it. After that clear, cold night, you wake up, ready to scrape the windows or watch your step as you walk down the block. In its simplest form frost is moisture in the air, gaseous water, that has settled into a liquid state, and frozen, on a surface. For this to happen, the air temperature needs to get below dew point, the temperature where gaseous water turns to liquid (why we get dew on our lawns overnight in cool temperatures). Frost mostly happens when the air is saturated with moisture.

When we do get cold, clear weather in our area, we see a lot of frost because we have moisture to spare. In a more dry place, even on the other side of the Cascades, frigid temps don’t always mean an accumulation of frost on the available substrates. Less moisture, less frost.

The typical frost we see in our area (Image: Brendan McGarry)

The typical form of frost most are familiar with is called hoarfrost, or radiation frost. We know it best because it’s what forms in the common manner described above. Hoarfrost often forms out of the air, but can appear when moisture in the ground or laying on the surface comes into contact with cold air as well. In all such conditions, the place the frost forms has to be cooling faster than it is heating (hence why it doesn’t typically gather on our faces on a cold night). Hoarfrost is of typical note to people who spend time in the backcountry this time of year. When it forms on the surface of snow (as tall, long crystals) and then is covered with more snow, it creates a weak layer that can shear and cause avalanches.

Hoarfrost on the top of snow. (Image: Brendan McGarry)

Window frost is another growth you might be familiar with, particularly if you own a car. You’ve likely seen these fern or feather-like growths fanning out against your windshield, natural art that you regretfully have to scrape off in the morning. These growths appear after the reaction of very cold air on one side of a surface, with more warm and moist air on the other side. A car that has been driven home in the evening of a very chilly night is a good surface for such forms, with the moisture of your breath and the warmth of the heater inside countering the cold air outside. Window frost can form on the windows of our homes, but it is far less common with double paned windows, which insulate from this interaction.

There are other types of frost we don’t see much, if ever on the Hill. In nearby mountains, wind frost is common enough, the accumulation of ice crystals as they are driven past surfaces by the wind. Unlike the above frosts (in most instances), the right conditions can see it forming during the day. It merely needs airborne ice crystals, wind, and cold air. Rime frost also requires wind, and appears quickly under very cold, wet conditions (think of the ice accumulating on polar vessels). However, rime looks more like solid ice and doesn’t have the crystalline formations that develop under a slower process. Technically rime is not really frost, it’s fast accumulation of liquid water, which then freezes, but it’s generally lumped in.

Frost is a major problem for plants, it can quite literally burst their cells with ice crystals, because they don’t have onboard heaters like us endotherms. If you are a gardener, and, particularly, a vegetable gardener, you plan your annual plantings around last frost dates. A seed can sprout before the last frost, and potentially make it through to safety, but if frost hits it can kill a young, fragile seedling. Some vegetables we grow in our area, can tolerate overwintering and the frost it brings. Kale is a good example, and even gets a bit sweeter with the cold (the sugars that develop are a natural antifreeze). Others, such as beans, will die back as soon as the first fall frost hits.

Hoarfrost pushing out of a soggy downed log. This was on a particularly cold day. (Image: Brendan McGarry)

Capitol Hill may not be the most frosty of places in an already moderate climate. Warm air rises, and thus the top of the Hill may be warmer and get less frost than the lower, colder areas nearby. I challenge you to test this theory out and travel between the top of Capitol Hill and the edge of Lake Union or down into Madison Valley the next time you get a chance on a frosty morning. I bet you’ll see a significant difference. Here’s to hoping for more frosty days before winter is over!